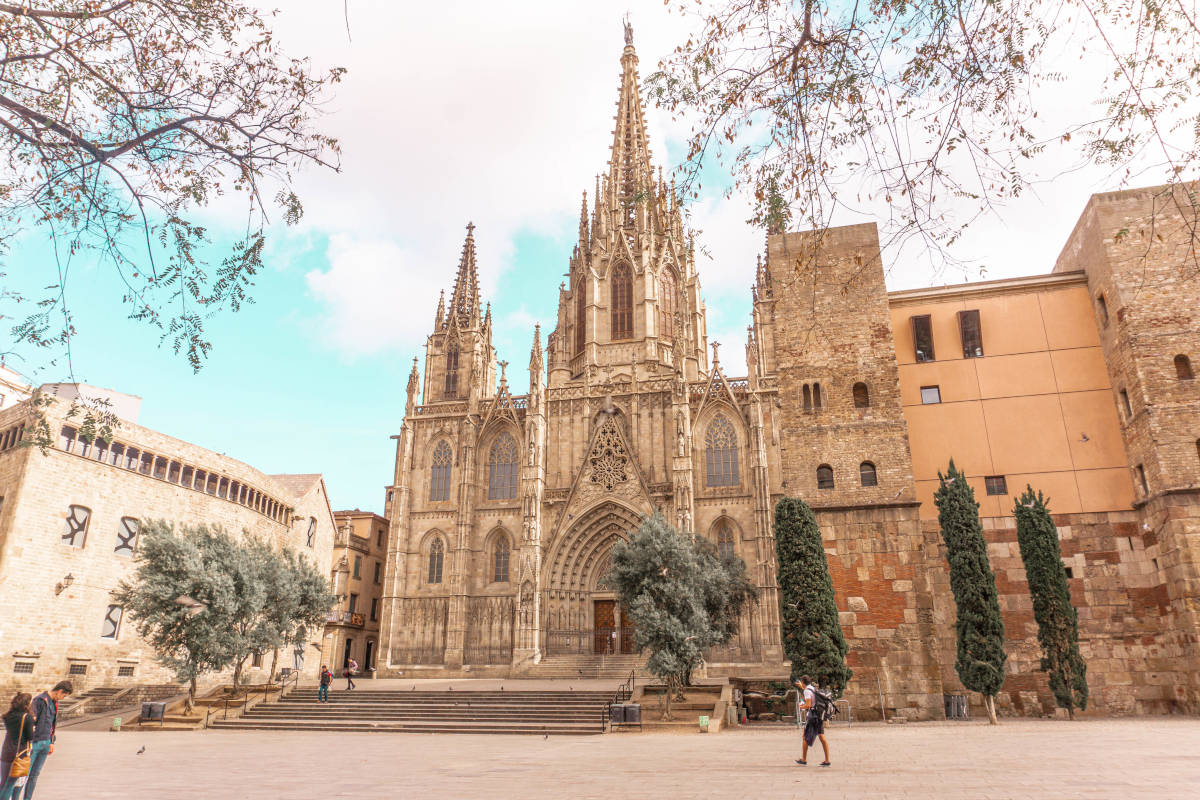 Are 2 days in Barcelona enough? Hardly. One of the most alluring metropolises in Europe, it’s a constantly developing city filled with art, music, endless sunshine and beautiful beaches. The harmony of all these together makes Barcelona a must-visit city in Spain!

Imagine walking under palm trees, trying some amazing dishes, and enjoying the vibes of the Catalan city. Who could say no to a Barcelona city break?

What to do in Barcelona in 2 days

The city has a lot to offer, and it’s really hard to schedule everything in Barcelona in two days because some of the main landmarks are far out of the way.

However, with this 2-day Barcelona itinerary, we will be covering every main attraction of this beautiful city.

Things to do in 2 days in Barcelona

On the first day, we’re starting on the most famous street in Barcelona, La Rambla. It’s good to start here in the morning, as it’s less crowded and more enjoyable. We will continue walking by walking through the small streets of the Barrio Gothico, and we’ll have a quick look into the world of Gaudi. Afterward, we’ll visit Plaça d’Espanya, and we’ll finish the day in the Gràcia neighborhood with some tapas and refreshing drinks.

La Rambla is Barcelona’s most famous street. While you walk along the boulevard you can find on both sides plenty of amazing shops, restaurants, and let’s not forget those human statues along the way!

One of the must-see places in Barcelona is the La Boqueria market, which you’ll find on La Rambla. Go and explore the best market in the city, and try some street food, fresh juices, Mediterranean fruits and other goodies, such as chocolate!

The gothic quarter is right near La Rambla. Some of the most important sights to see are the Barcelona Cathedral, on Placa Seu, the Pont del Bisbe gothic bridge, linking two palaces, right near the cathedral. Also, the Plaça Reial, that’s surrounded by enchanting, really Spanish buildings, beautiful palm trees and Gaudi’s lamps. On Plaça Reial are restaurants all around, with outside tables on the square.

Plaça d’Espanya is probably the most important square in Barcelona, and also one of the most beautiful ones. It’s a little bit far from the Gothic Quarter, so it might be a good idea to take the metro.

First, you’ll see the two magnificent Venezian Towers. On top of Montjuïc is Barcelona’s finest museum, the Museu Nacional d’Art de Catalunya. In the middle of the square, you can see the Magic Fountain – which if you’re interested to see the show, it’s happening at 8 pm, but it’s good to check out online, as it might change depending on the part of the year.

Last but not least, you can visit the Arena de Barcelona bullring, which now functions as a shopping center, and you can also go to the top for a beautiful view of the Plaça d’Espanya.

Two masterpieces of Antoni Gaudi. Both are located on Passeig de Gràcia, pretty close to each other. The Casa Batlló is at number 43, and Casa Mila at number 92.

I do recommend taking the metro from Placa d’Espanya, as I have mentioned, that is pretty much out of the way. Casa Batlló and Casa Mila are both fascinating, with the most unique facades.

Both houses were designed by Gaudi in Modernist and Art Neuau style, and both can be visited from the inside. I really recommend visiting, especially the Casa Batllo, to step inside an unbelievable world of architecture that you’ve never seen before!

Night out in Gràcia

Gràcia neighborhood is probably one of the best areas in Barcelona for a fun evening. The neighborhood is full of enchanting squares, with restaurants and outside terraces on each. One of these is the Plaça de la Vila de Gràcia. If you fancy some extraordinary tapas after the long day of sightseeing, this is your place!

If you arrive in Gràcia early, you can also include in your itinerary the Gaudi House Museum, or the square Plaça de la Virreina.

Gràcia neighborhood is famous for its charming streets, where you can walk under orange trees, and for its great bars. In many places there’s live music in the evenings, and there are tons of cocktail bars to explore! Name what you’re looking for and find it in Gràcia.

The second day will bring us a little bit more into the magical world of Gaudi, by visiting some of his most amazing masterpieces, such as the Güell Park, the Sagrada Familia basilica and the Park de La Ciutadella. We’ll be ending the day this time on the beautiful sandy beaches of Barcelona. Ready? Let’s dive in!

To reach Park Güell, if you’re not staying close to it, use public transport. There are more buses going in the area from around the city. The park is a bit far from other landmarks in Barcelona, so it’s best to start here. Except if you’d reverse the route, to watch the sunrise at the beach and the sunset near Park Güell, at the bunkers of El Carmel.

The park was designed by Antoni Gaudi and commissioned by Eusebi Güell in 1924. It’s one of his most stunning works, composed of buildings, colorful tiles, walkways along fascinating sculptures and colonnades, and a beautiful panorama from the top terrace above Barcelona.

To enter the park, you’re charged for a ticket €10.00, and they can be bought on-site or online.

Considering that Park Güell is one of Barcelona’s top attractions, I really making this a priority, as I feel like Barcelona isn’t really Barcelona without seeing this park.

Sticking to the route, the next stop will be the iconic church, the Sagrada Familia. This isn’t a long walking distance from the park, but it’s really up to you. There are buses taking you from the park to the basilica.

Sagrada Familia is under construction since 1882. The diversity of the church is in the styles that differ. The church was Gaudi’s biggest project, and he dedicated the last 12 years of his life to it. What he created, must be seen!

The triumphal arch was built for the 1888 Barcelona Universal Exhibition, in Neo-Mudéjar style. The colorful monument is leading straight to our next stop!

I’d rather call the Park de la Ciutadella the oasis of the city center of Barcelona.
There are many ways to spend time here. By renting a boat, or just taking a walk in the park. Discover another piece from Gaudi, the Cascada Monumental fountain. Alternatively, you can visit the zoo of Barcelona, the Catalan Parliament, the Zoological Museum, the Museu d’Art Modern, or the Geologia Museum.

Barcelona has 4.2km of sandy beaches (what a blessing!). There are two really popular ones, great for outdoor activities, or to simply go to the beach, or cycle around. La Barceloneta, which is closer to the city center, and the W Hotel. The other one is Icària Beach, where you can spot dozens of restaurants and cocktail bars with seafront views! A sunset walk along the boardwalk, under the palm trees, can’t be compared to anything!

Tips for a 2-day Barcelona itinerary

One of the best things about Barcelona is that you’re facing fewer language barriers than for example in Seville, which is another popular destination in Spain. Barcelona is the home of many remote workers, freelancers, and people relocated for work from all around the world. This makes it so much easier for everybody not speaking Spanish or Catalan, to make connections, and also to get around, or get help!

Find a perfect place to stay

There are three main areas that are great to stay in, while you’re in Barcelona. The Gràcia neighborhood, the Gothic Quarter, and the beaches. There are some amazing hotels with rooftop pools, and also great hostels downtown. You can find anything from the cutest Airbnbs to luxury hotels, such as the W Hotel or the Hotel Arts.

When to visit Barcelona?

Possibly one of the best things in Barcelona is, that the weather is really nice all over the year. I mean, in January there were days when you could go out just in a shirt and a simple jacket.

Usually speaking the temperature isn’t falling under 8°C even in the winter. While in the summer the highest average temperature is 29°C, this time of the year might not fit for many, to wander in a big city. I recommend choosing the Autumn or the Spring if you’re looking for a city break with sightseeing.

How to get around in Barcelona?

Airport: To get to the city center of Barcelona, you can either get the train or the bus. The Train is basically the subway. I rather prefer the bus, because I love seeing everything while I’m arriving at my destination.

While most of the important landmarks are relatively close to each other in the city center, some of them, such as Guell Park, are a bit out of the way. The public transport in Barcelona is really simple and great! Just make sure you’re getting a 10-pass ticket from a machine at the subway stations, as that’s the cheapest!

You can then use that for buses and the metro too. Otherwise, Uber and taxis are common ways to get around. Alternatively, you can rent a bike, or an electric scooter to easily get around in the city easily and more carbon-free.

Barcelona has a wide range of things to see and do. If you’re short on time, and you’re looking for just a city break in Barcelona, this itinerary will be perfect for you! We’ll be covering every major and important sight that can be visited in two days in Barcelona.

Barcelona is famous for its amazing summer parties. There are endless amazing clubs around the city, such as the Apolo, the Jamboree, and La Terrazza. There are also plenty of Flamenco shows around Barcelona. If you’re searching online for specific dates, Google is also on top of the events you can attend if you can afford three days in Barcelona.

We can’t forget about Camp Nou either. Many of us have a Barca game on our bucket lists, but if you’d just explore the stadium and the museum, that’s possible too.

Author Bio: This is an article by Helga, from ShegoWandering. Travel blogger, writer, editor, and photographer. I’m passionate about life, traditions, culture, warm destinations, and Latin countries. The focus of my work at the moment is on Italian and Spanish destinations, bringing the most authentic and colorful places for you to visit!

1 thought on “2 Days In Barcelona – A Simple + Epic Itinerary”