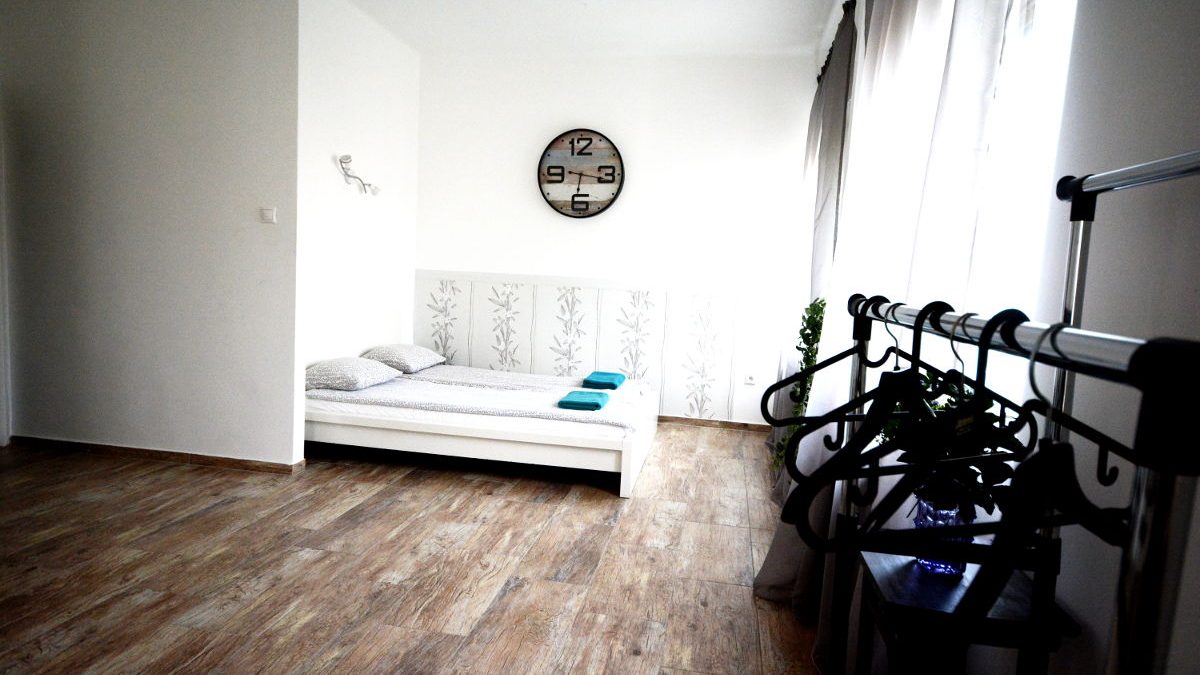 If you are travelling to Hungary and looking for an apartment in Budapest, here is a review of the flat we rented. We stayed for four days and we decided to rent a flat in Budapest instead of looking for a Budapest hotel so we could be a little more independent. Sometimes, in fact, we like to have dinner in the house, especially when we are too tired after a day of sightseeing.

If you want to rent a flat in Budapest, you will find this review useful. It’s a simple apartment but in a great location. Here we review the flat with a detailed description as well as the neighbourhood. This will give you an idea of what to look for and will help you choose your next Budapest accommodation.

Our apartment in Budapest – Full review and details

Description of our Budapest apartment

The one that we chose among the Budapest apartments that we saw was clearly recently renovated. The no-frills entrance looks pretty worn-out because the building is actually old. The elevator was also pretty ramshackle and somehow shaky but it worked. Whether the internal door was open or closed, it made no difference, the elevator went both up and down.

Both to enter and exit the building there were codes to type in the electronic devices at the entrance and close to the elevator before getting out. The manager will give you both codes at your arrival and they are also written in the keys.

In this area of our flat in Budapest we found a dining table with the chairs, a sofa, the TV, a hanger serving as the wardrobe where we could hang and arrange our clothes, and a double bed with bedside tables.

The kitchen was very small and little equipped. There was a small fridge, a sink, a kettle, a single electric stovetop and a microwave. A few kitchen appliances like cutlery and pots, soap and sponge to wash the dishes, and a trash bin.

The bathroom was pretty new, plenty of hot water, everything was working fine and the shower had a curtain so we didn’t make everywhere wet.

Click here to check the price and book this apartment.

Where was our apartment in Budapest and how to reach

We found this flat in Budapest city centre on Booking.com, the hotel booking website we always turn to when planning a trip. We chose this apartment because of the reviews and the position. While none of us had previously been to Budapest, a search on Google Maps showed us it was pretty central and well-connected to public transport.

Our Budapest apartment was in Károlyi utca 14/A, in the 5th District on the Pest side of the city. From the airport, there are two options to get there on public transport. You can either take the bus 100E, get off at Kálvin tér metro and walk for 5 minutes, or you can take the bus n. 200E from the airport, get off at Nagyvárad tér metro station and take the metro to Ferenciek tér, which is a couple of minutes walk from the house.

READ MORE: Check out our guide to planning a perfect trip to Budapest.

The neighbourhood of our Budapest apartment

As mentioned before, the neighbourhood of the flat we rented in Budapest was fantastic for many reasons.

First of all, it was close to several metro stations, buses and the tram. We could easily reach with a short walk three metro lines: the red at Astoria station, the blue at Ferenciek tér and the green (and blue) at Kálvin tér.

The district of our apartment in Budapest was excellent also for the choice of restaurants. Very close, there was a lovely cafe where we had our first breakfast, Zoska, one of the Budapest restaurants we recommend to first-time visitors.

Apart from this, in the area, you will find Iranyi utca with many eateries and Vaci utca, that also has several restaurants and bistros. Honestly, we didn’t like Vaci Street because of too touristy and low-quality food. Less than 10 minutes walk from the apartment is also the Central Market, a great place for photography and street food. Obviously, along with restaurants, here there are also several bars for breakfast or a drink.

Finally, since we were in an apartment, sometimes we had breakfast and dinner in the house. So having very close big supermarkets like Aldi and Lidl was extremely convenient. They were both some 10 minutes walking away.

Final thoughts on the flat we rented in Budapest

Among the Budapest apartments for rent that we saw on Booking.com, we chose this one mainly for its position. Other reasons were how it was located in the building (not ground floor) and the reviews saying everything worked fine.

For four nights we paid 207 euro, which is pretty reasonable being in such as great, central location. To be honest, apart from the problem of the pests in the bathroom, we enjoyed our stay. Among the Budapest holidays apartments, we would recommend this one if it’s your first time in the city and if you are on a budget.

If you are not confident with the districts and local public transport, you will find this area easy to navigate. You can reach many places on foot and the rest by bus, metro and tram. Google Maps is your friend.

If you are travelling on a shoestring, this is also convenient. Given the area and the flat and since we were looking for affordable accommodation in Budapest, we found the price reasonable. Probably you can find it cheaper but farther from the city center and with fewer services. Among the Budapest apartments for rent and the hotels in the area, this had competitive rates.

Going grocery shopping at Aldi and Lidl, you can save on some meals to have at home instead of going to a restaurant. Keeping in mind that it’s no luxury, we have no problem in recommending this Budapest accommodation

Click here to check the price and to book this apartment.