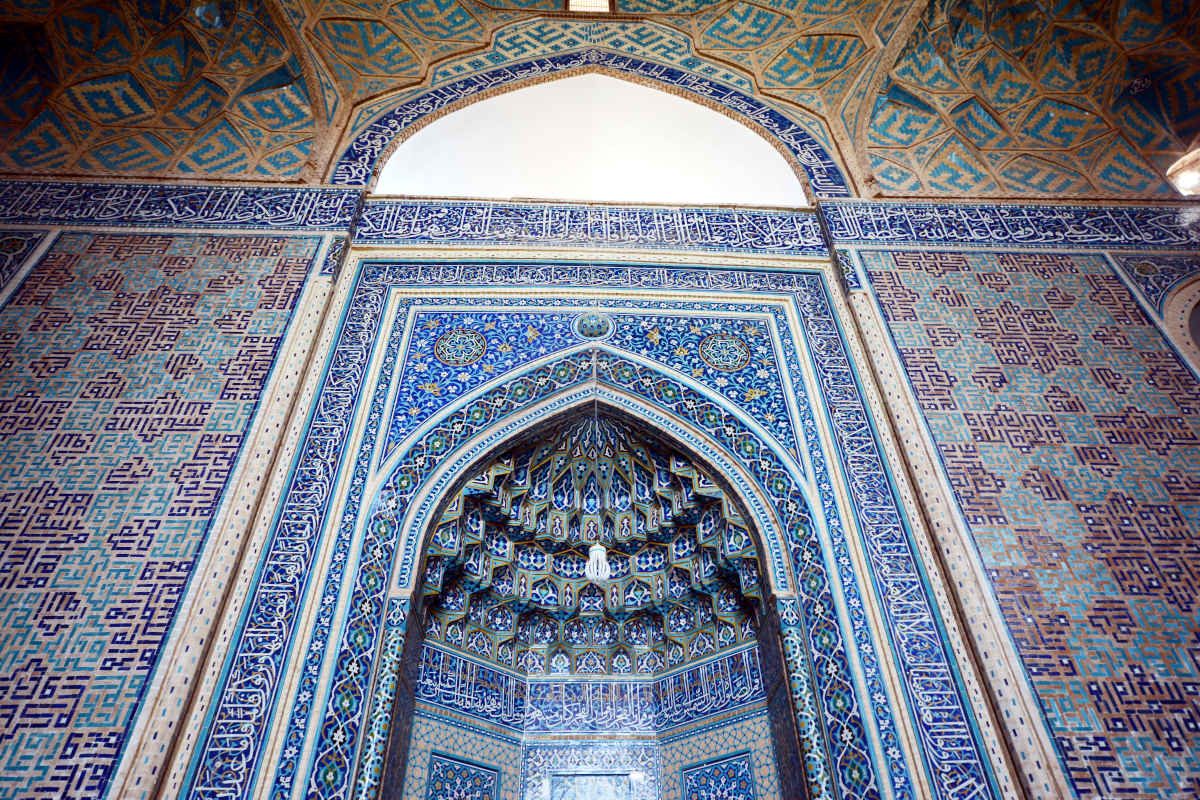 One of the biggest highlights of the desert city of Yazd is certainly the beautiful Friday mosque. The sophisticated decorations of Yazd Grand Mosque, delicate yet sharp geometric shapes also used as patterns for local carpets, are a mesmerizing interplay of symbols and colors that hardly a series of photographs can do justice to.

Iranian mosques are always finely decorated, and Yazd Jame Mosque (Jame as the place for Friday prayers as opposed to daily masjids) is one of the most stunning examples of Iran’s religious architecture and artistic expression.

Built under Ala’oddoleh Garshasb of the Al-e Bouyeh dynasty in the 12th century, Yazd Grand Mosque was completely renovated in the 14th century. It is located in the heart of the city and was once in the middle of the city’s pizzazz, set among public buildings such as schools, local markets, libraries, and offices.

According to some research, the building was originally founded as a Zoroastrian temple dating back to the Sassanid era and was later converted into a mosque during the Seljuk rule. In all its majesty and elegance, Yazd Grand Mosque in typical Azari style is considered one of the finest examples of sacred Persian architecture.

A charming collection of turquoise tiles and sand-hued brickwork creates a spellbinding atmosphere. The huge entrance is embellished with verses from the Quran, symbols, laws, and deeds, alongside two tapering minarets that, with 52 meter in heights and 6 meters in diameter, are believed to be the tallest in Iran.

Quickly becoming a popular destination among tourists from all over the world, when I visited, it was beautifully empty and quiet, giving me the chance to indulge in its peaceful vibe.

From the imposing gate to the tall minarets to the exterior facade as well as the interior, the colors that we see the most in the mosque’s tilework, mosaics, and plasterwork are Persian blue in its many shades and the sand hues typical of the desert architecture. Sophisticated mosaics decorate also the main prayer niche (mehrab) situated under the dome.

Verses from the Quran blend smoothly with symbols, flowery patterns, and geometric shapes in many shades of blue and turquoise.

Symbols and figures might look very different from each other but somehow they match and they don’t create a clashing sight. The light inside Yazd grand mosque comes from the reflection on the white plasterwork on the dome and the walls.

The complex features also a large courtyard where long arcades all around offer faithful and pilgrims rest from the sun. Within the courtyard, you can see a 14th-century sanctuary chamber (shabestan) embellished with faience mosaics.

More images of the enhanting decorations of Yazd Grand Mosque