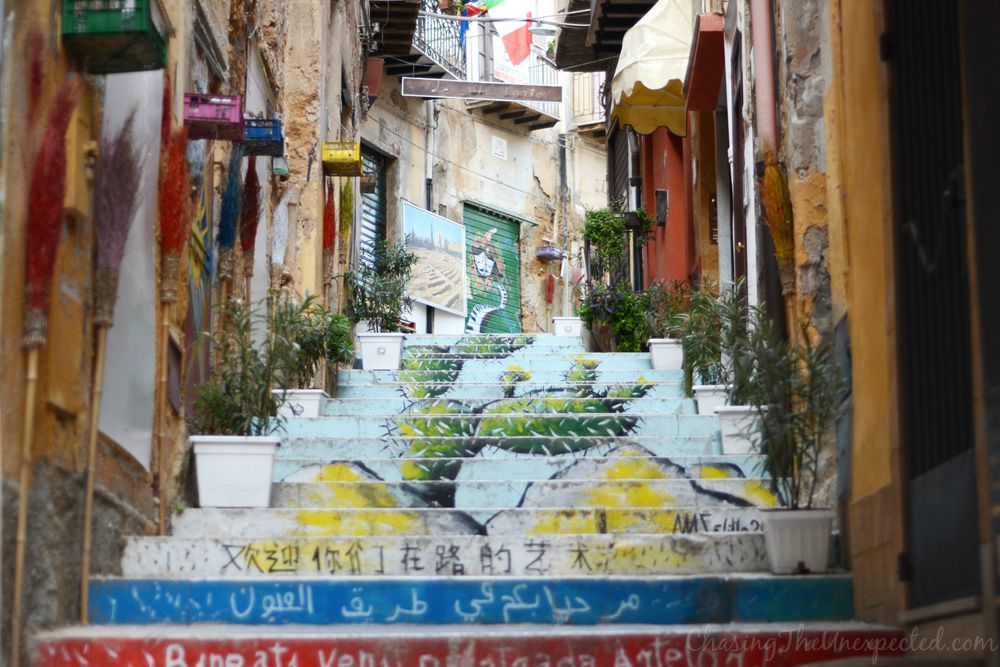 It was only a coincidence that we happened in Agrigento minutes before the parade for the saint patron Calogero started, but even if we were there in a different time than mid-June, I’m ready to bet that the spirituality that permeated the air would have been just about as thick and inescapable.

The balconies framing the main streets of the old district duly displayed visible signs of their owners’ heartfelt devotion and sense of deference, something they carry along also in their daily routine. From a soccer-like “Viva San Calogero” to deeper messages such as “Please San Calogero, listen to the prayers of those who turn to you” and “bless the city and all its residents”, the city beamed with a special holy aura, but that was just an extra fervor adding to the stream of madonnas quietly nestled in dedicated niches in the walls.

I’ve always been curious to see the variety of ways people of different backgrounds have to approach the divine, and in this Sicily is a real treasure trove of idiosyncrasies and an alluring combination of eccentricity and outlandishness which, admittedly, it’s one of the main reasons it is so attractive to Italians and foreigners alike (alongside its cuisine, of course).

Strolling about Agrigento’s city centre is a great way to whirl back and forth in time.

Moving from the myriad of churches belonging to different historical periods, passing through the worldly palaces of the secular power then landing in contemporary ages with the beautiful and cosmopolitan street art with greetings in every language will take you to the past and bring you back to the present yet retaining a traditional style with the ever-present cactus and old working tools.

One of the most fascinating aspects of Sicilian culture and history is its eternal mingling with values and ideas coming from other countries in a way or the other, for a reason or the other. A strategic position and Sicily’s conscious role of crossroad between East and West might well be among the reasons of Agrigento’s origins being foreign, Greek precisely, who founded the thriving polis of Akragas.

Today proudly displaying their Greek origins at the Valle dei Templi, the different and unfamiliar seems to have become so embedded in Sicilian culture that I can’t even imagine the island without its foreign element.

More often than not, the people landing in the southernmost Italian coast come from Northern African countries, and Sicily has been heavily influenced by such foreign civilizations in every aspect of daily life, from the architectural styles charmingly revealed layer after layer, to the culinary traditions, a delicious blend of native ingredients and African flavors.

The tragic adventures of desperate migrants coming from Africa and West Asian countries being everyday news, I did expect to see a diverse population in Agrigento, but hardly any news has ever managed to cover the reality, a complex mix of people, cultures, languages, needs and stories. I saw men, women, children clearly well integrated in their hosting society but whose look ill-concealed the hardships of a not-so-enjoyable life they so badly wanted to escape from.

This is how kebab places came to stand beside traditional restaurants, Arabic became one of the languages most heard alongside the local dialect, and the evil blue eyes with protective powers started to be sold together with Sicily’s national symbol of Trinacria, the island’s ancient name.

Today like in the past, a mix of cultures comes with a coexistence of religions and rituals, but while under the Arab occupation the worship places were built following the delicate patterns of the Islamic artistic and architectural style, now the spirituality takes the form of a suffering Mary and a blood-stained Christ surrounded by modern and bygone signs of devotion and a huge crowd of saints, martyrs and loyal followers.

Wandering the streets of old Agrigento, faith is not the only thing that will capture your attention. In an intriguing collaboration of old and new, the main streets are lined up with crumbling buildings that add to the old-fashioned spirit of the region proudly displayed in the ceremonial manners, love for tradition and village-like atmosphere.

It sure seems a lack of attention from the local administration, and to some extent I’m pretty sure that is the case, but I won’t deny that I find “experienced” buildings incredibly charming and the best place to take in the authenticity of a city.

Agrigento was the first town I visited in my first trip to Sicily, many were the places I would have liked to see, but as my stay was going to be short, I managed to include only Catania. A good choice I must say, which will be the subject of my next post. Stay tuned and enjoy the rest of images from Agrigento!

3 thoughts on “Modernity and tradition in a spirituality-laden Agrigento”