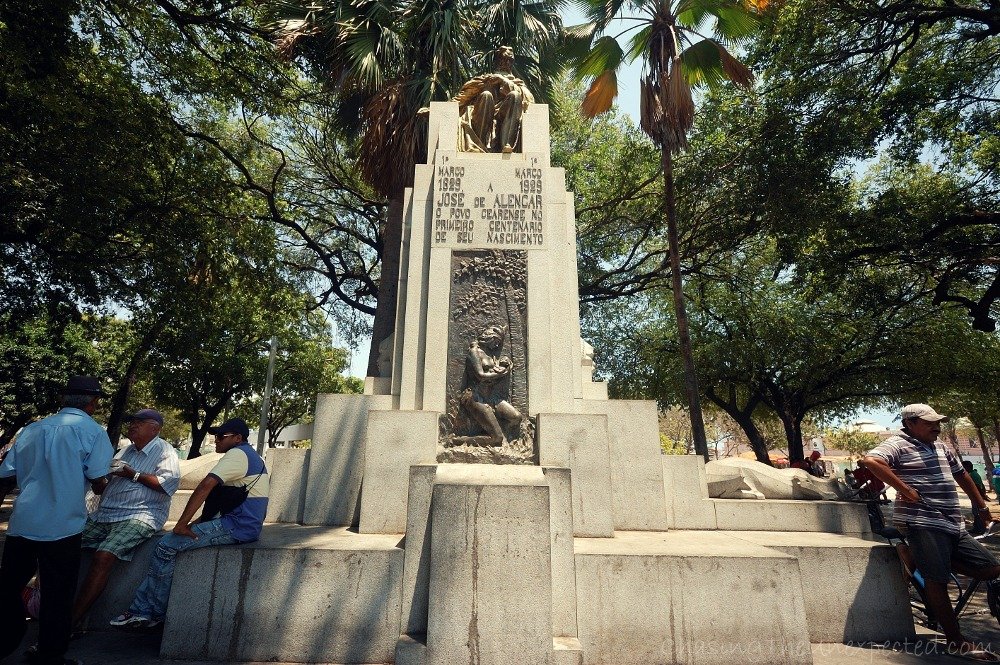 I’ve already written about the tragic story of Iracema, so yesterday, while I was vagabonding around Fortaleza city center, finding a tribute to the very much cherished writer José de Alencar was a true moment of joy. I would have liked it to be a cozy one, between me and the writer, but being in the middle of Praça José de Alencar the atmosphere was all but cozy.

God-inspired singers chanting how much Jesus loves us all, clochards dozing on the grass, ubiquitous political banner flags fluttering and obstructing the view, music coming out from every single street vendor, even (and especially!) those selling bras, all conspired to make my first visit to Praça José de Alencar a bedlam.

Trying to find my way, or any way for that matter, in this burst of vitality and noise that can only belong to Brazilian and Chinese enthusiasm for life, I snapped a quick photo of Teatro José de Alencar (you guessed it, the whole place is Alencar-themed) and, still stoned by all those off-key notes, stumbled on the great tribute the city of Fortaleza devoted to its great writer in the occasion of the first centenary of his birth in March 1st, 1829.

Amazingly, even though I’m not Brazilian (yet) nor Cearense (yet), I felt a sense of gratitude to whoever had the idea for this statue.

In Fortaleza, José de Alencar could not be better represented than in the company of his beloved heroine Iracema, the young indigenous girl who sadly fell in love with an unreliable Portuguese warrior, cause of all her troubles.

Around the city, Iracema is depicted as a warrior and a guardian, but here she’s beautifully represented as a mother, with her son in her arms, and under her favorite palm tree where she was buried. Alencar seems to carefully look after the characters he’s created, aware of their destiny and somehow willing to protect them.

Even just for this statue (and Brazilian enthusiasm, that is), I would recommend a visit and would go back myself, to this square surrounded by madness, bras, and coconut vendors.

8 thoughts on “Madness, bras and the best tribute to José de Alencar”