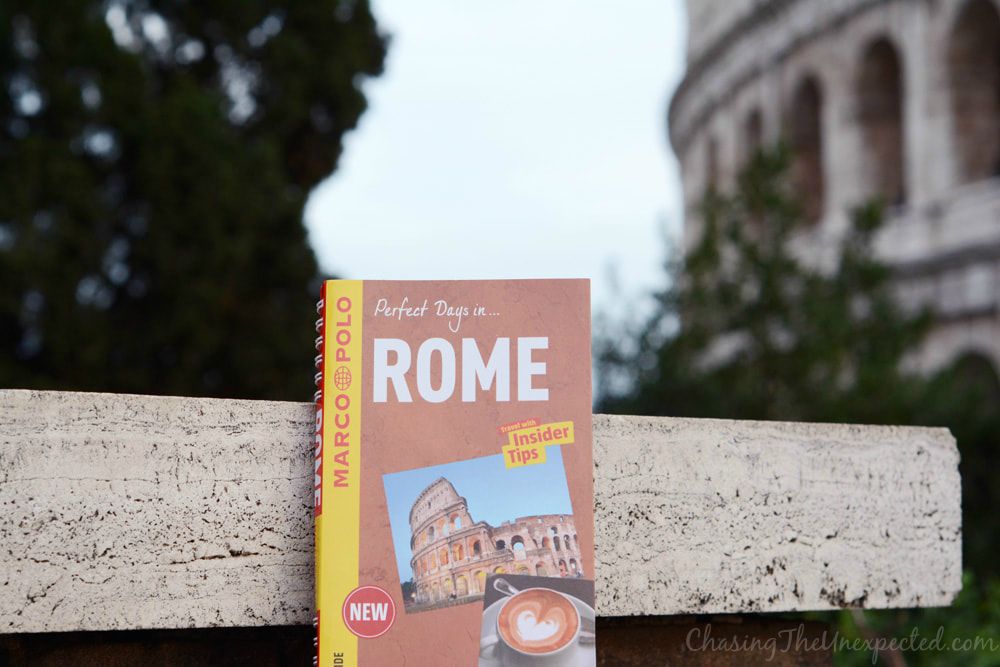 With the extraordinary Jubilee, or Holy Year of Mercy, announced by Pope Francis and starting December 8th, from the very moment all sacred doors around the city will be open, Rome will be in the spotlight even more than usual, which is already quite a lot.

While I sure am pretty confident getting around the Italian capital, where I’ve been living on and off for some ten years, these days I’ve granted myself with some relax and started wandering and exploring Rome like a tourists with Marco Polo Rome Spiral Guide in my hands.

The  book starts with the practical and much necessary tips included in the “Finding Your Feet” section on how to get to the city from Rome airport, be it Fiumicino or Ciampino in case you are flying with Ryanair, either using the public transport or by renting a car, on how to get around the city center, tips on accommodation, food and drink, shopping and entertainment, alongside an exhaustive Rome map.

While the guide obviously mentions places such as the Pantheon, the Colosseum, Piazza Navona, Campo de’ Fiori and the Vatican Museums in the top ten of things to do in Rome, it’s good to see it doesn’t miss great experiences and Rome attractions probably lesser known by the crowd such as Palazzo Altemps, 15-century palace with a stunning exhibition of some of the city’s best Roman sculptures, Villa Farnesina in Trastevere that has a room entirely covered with Raphael’s frescoes, and Sant’Ivo alla Sapienza, that I haven’t visited myself, with a magnificent spiralling dome designed by Francesco Borromini, famous baroque architect and Gian Lorenzo Bernini’s rival and archenemy, and last but not least, kudos on devoting a whopping three pages to San Clemente Basilica among the places to visit in Roma, an extremely interesting and important building way too little known and never enough visited.

Breaking the guidebook into the sections of “The Ancient City” for an experience of imperial times, “The Heart of Rome” to explore its Renassaince, Baroque and Medieval days, buildings and churches, and “Northern Rome” to include places such as the beautiful Santa Maria Maggiore basilica, the smaller, and mosaic-covered, Santa Prassede basilica, the most famous Fontana di Trevi and the Spanish Steps, the book tickles my curiosity with lesser known Rome attractions such as quirky Museo Nazionale delle Paste Alimentari covering every aspect of the Italian pasta, from its history to the cooking methods.

At the end of Marco Polo’s guidebook, too, there is something worth taking note among the things to do in Rome, valuable suggestions on day trips to take in the surroundings with jaunts to UNESCO-listed Tivoli, where stand Villa Adriana, a Roman-era villa commissioned by emperor Hadrian, and Villa d’Este, a former Benedectine convent converted into an exclusive fountain-dotted villa for Cardinal Ippolito d’Este, to Ostia Antica for the stunning archaeological remains of the ancient commercial hub serving the capital, to Cerveteri and Tarquinia to explore the Etruscan past of the Lazio region, up to Frascati, to which I, myself, never really gave a thought, described in the book as “a town nestled on the slopes of the Alban Hills, best known for its white wine, cooling summer breezes and lofty views over Rome.”

As for me, while I did find many places I haven’t visited in Rome itself yet, I think the next local landmark I’ll be using this guide for might well be the nearby town of Tivoli and its dream-like villas.