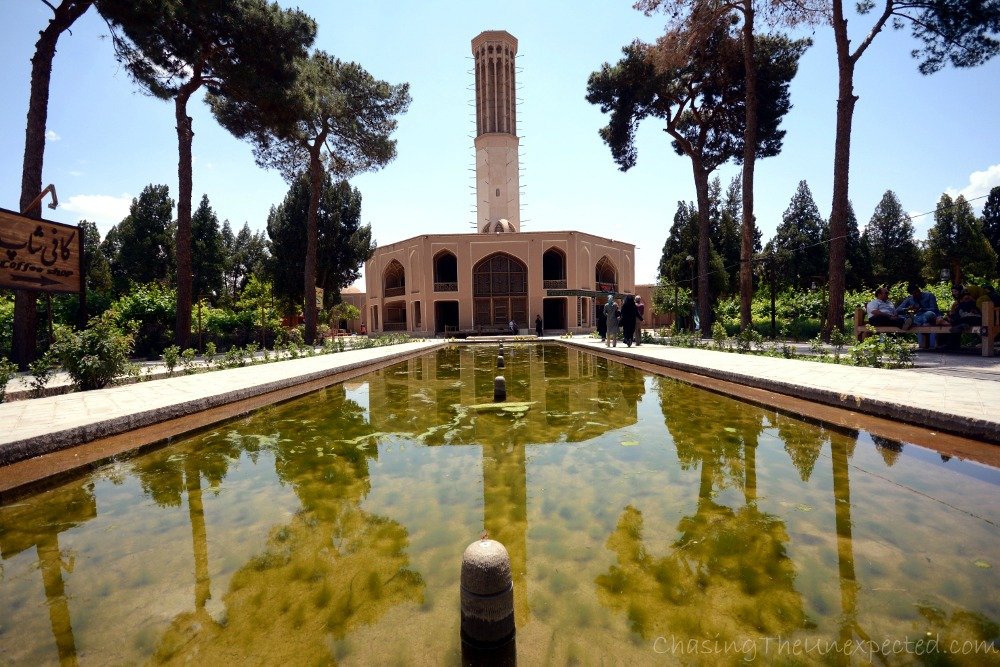 The charming city of Yazd is famous for its typical desert architecture, and among the most distinguished features are by all means the badgirs, or wind catchers, as they are romantically reworded in English. In the quest for the tallest badgir, or for a green oasis in the middle of the desert, we ended up in Dolat Abad Garden, a luscious estate very likely with a glamorous past, all to be explored after stepping over its entrance of sand-hued walls and towers.

The first thing you will notice ambling about the city, or better climbing up to the terraces of the many makeshift handicraft shops, is right a forest of badgirs, a majestic sweep stretching as far as the eyes can see, and this is how being just below the tallest one somehow revealed to us a bit more of the entire region.

Exquisite example of typical Persian-style gardening, Dolat Abad dates back to 1160 AH (1747-48 AD), when it was commissioned by the Great Khan, Mohammad Taghi Khan-e Bafghi, during the Zand dynasty, as his residence. Stretching across some eight hectares, in the complex you can admire elegant halls decorated with stained glass doors and windows, a lush garden rich in water, flowers and pine, cedar, cypress and pomegranate trees alongside a vineyard, and the undisputed star of the show, the huge wind catcher, forerunner of modern A/C, that, with its nearly 34 meters, is considered Yazd’s and Iran‘s (and the world’s, for that matter) tallest badgir.

Declared a UNESCO world heritage site in 2011, once in Dolat Abad Garden you can chill out on the grass to enjoy the sun, the breeze, or the ice-cold dry weather depending on the season, you can sip an Iranian black tea at the local cafe or you can have a scrumptious lunch at the restaurant within the beguiling estate.

Whatever your intentions are, this is by all means one of the desert city’s must-see spots.

Below some more shots taken while meandering the lanes of Dolat Abad Garden.