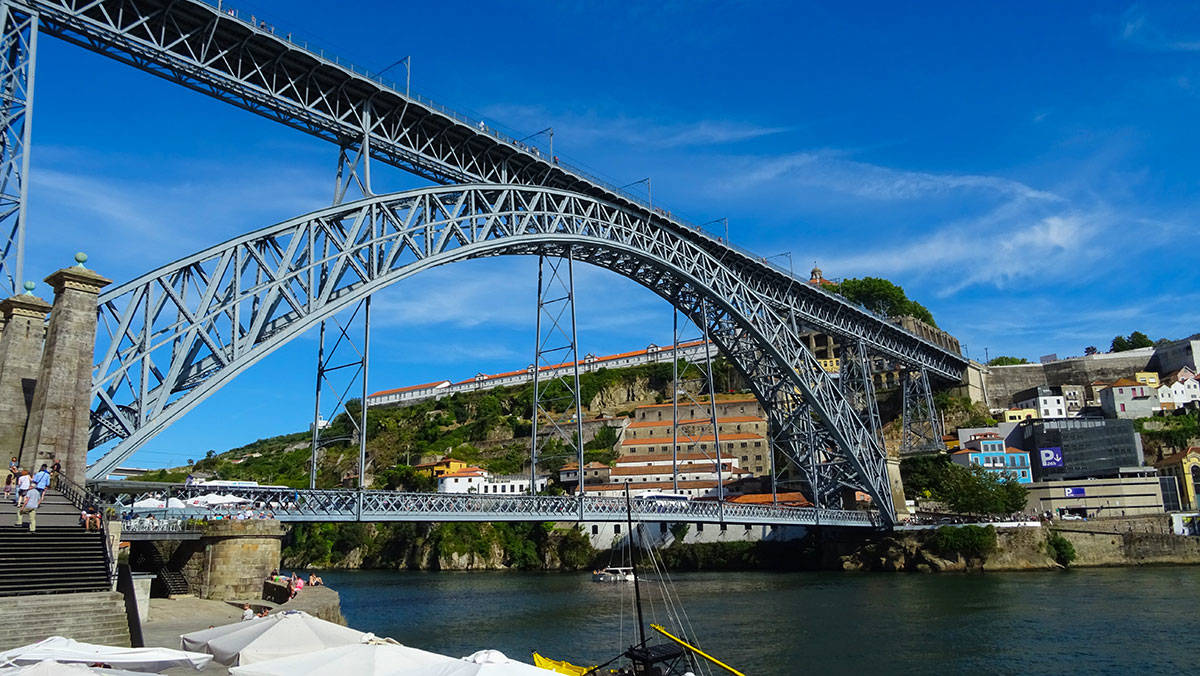 Porto is a beautiful, charming city, with a striking landscape with 2000 years of history that has been classified as UNESCO World cultural heritage. The city has plenty to do and see, yet as it is a small and very compact city you can easily visit in 3 days. We planned the ideal itinerary to visit Porto in 3 days so you can make the most of your time.

What to Do in Porto in 3 Days

This itinerary includes all Porto’s UNESCO heritage sites, the city’s top attractions, the beach, the river, and the city park. We will also explore everything related to Port wine, which is a worldwide famous fortified wine, produced in the Douro Valley and stored and aged in the barrels in Porto (in Gaia).

What to see in Porto in 3 days

Every place in Downtown Porto is within walking distance, so you won’t need public transportation today, just good walking shoes.

S. Bento Train Station is one of the most beautiful train stations in Europe, and it is notorious for its white and blue tiles called azulejos. Azulejos are one of the Portuguese most typical architectural features, blue painted tile representing events of Portuguese history and life. The walls of S. Bento train station are full of azulejos with different historical events. S. Bento is also the major train station in Porto, where you can catch trains to Europe and Portugal’s most important cities.

Saint Catherine Street is Porto’s most famous commercial street. This pedestrian street houses restaurants, coffees, libraries, and famous clothing brands. But it also has some historic features like the Church of Santa Catarina (a beautiful church covered with azulejos), café Majestic (a luxurious old coffee house), and the market of Bolhão (city market).

The street is very close to the train station – it is a good place to shop, or to drink espresso with a pastel de nata (Portuguese egg tart).

Majestic is a historic cafe dating back to 1916, it has a stunning architecture. Decorated in an art nouveau style, with luxurious chandeliers, marble columns, and old mirrors, that will make you feel in another era. It used to be a hub for artists and writers. Nowadays, it is a bit of a tourist attraction, but it is well worth going, as it is a beautiful cafe. Be aware that prices can be a bit expensive, or at least much more expensive than in an ordinary cafe.

The market of Bolhão is the city market, it is where you will find fresh fruits and veggies, fish, meat, clothes, and much more. Unfortunately, it was closed in 2018 for reconstruction, but it will eventually open again. It is an authentic place with a stunning neo-classical building built in 1914. It is always a great experience to visit the city’s market, plus you normally find good food.

Aliados plaza is the main square of the city, and where you will find the city hall. The plaza is surrounded by monumental historic buildings like the city hall, Cardosas Palace, that was converted in a hotel, and several imposing buildings. It is an impressive square with plenty of history, and where you can also find the statue of D. Pedro the IV (King of Portugal and the emperor of Brazil).

The church of Clérigos is an old church from 1749 built by the Brotherhood of Clerics and later on the tower was added to the church. The tower is 75 m high and has 225 steps. You can visit the church and the tower, and it is well worth the climb as the view is breathtaking, although the number of steps. It is the best spot to view Porto from above with a 360º view.

This bookstore was built in an elegant Art Nouveau style back in 1881. In the middle of the bookstore, you will find a stunning staircase that is said to have inspired J. K. Rowling to create Hogwarts moving staircases. Though she has recently denied it, the resemblance is there. The walls are full of wooden bookcases, it is a place for booklovers to get lost.

Palácio da Bolsa was Porto’s Stock exchange palace and it was erected in 1842. It may sound boring, but the rooms inside are dazzling, especially the Arabian room. You shouldn’t miss a guided tour of Palacio da Bolsa when visiting Porto.

This day is dedicated to Port wine and the beautiful scenery of Ribeira and Porto’s UNESCO world heritage site.

The Ribeira (Riverbanks of Douro River) is the most enchanting area of Porto, full of colorful houses, small alleys, and cobbled streets. The Douro River is one of Portugal’s most important rivers. In the past, the wine was transported in small boats called Rabelos from the vineyards in Alto Douro to the cellars in Porto/Gaia, but nowadays, they only have a tourist purpose. The banks of the river are full of restaurants, coffees. On the South Bank of the River, Gaia’s side, you will find the famous Port wine cellars.

Prince Henry was responsible for Portugal’s maritime expansion in 1414. He was born in Porto, in a house near Ribeira. The house used to be an Old Customs House, but now it is transformed into a museum. In the museum, you will learn plenty of the Age of Discoveries and pay tribute to this great explorer.

Crossing the Douro river there are 6 bridges, D. Luís I Bridge is the most beautiful and emblematic of the 6. The bridge was designed by Teofilo Seyrig, a disciple of Eiffel in 1881. It has two decks, the upper deck is used by the metro trams (line D), and the lower deck is used for cars. You can cross both decks by foot, and it is highly recommended as you will find there some of the most incredible views of Porto.

Sé (Cathedral) of Porto is the most important church in the city and one of the oldest monuments. It is very near to S. Bento train station and the upper deck of the D. Luis I bridge. From the Cathedral, you also have magnificent views of Porto and the river. The Cathedral also has a beautiful Romanesque rose window worth contemplating.

Monastery of Serra do Pilar

The Monastery of Serra do Pilar is on the other side of the upper deck of the Bridge D. Luis, in Vila Nova de Gaia (south margin of the Douro River). The church has a unique circular format that you can visit as well as the monastery and the cloister. In front of the church, you will find a viewpoint with pleasant views of the bridge of D. Luis and the city of Porto. By the monastery there is a pleasant park, Jardim do Morro, it is a good place to relax. There is also a Cable car that takes you to Gaia’s side of Ribeira.

One of the coolest things to do in Porto is visitIng the Cellars of Port Wine. Port wine is produced in the Douro Valley and then stored in the Cellars in Vila Nova de Gaia. As you may know, Port Wine is a fortified wine, worldwide notorious. During a visit to the Cellars, you will learn all about the wine and have a wine tasting.

Cruise in a Rabelo Boat

A visit through Porto can’t be complete without a cruise in a Rabelo Boat. As we said before, Rabelo Boats were used to transport the wine barrels to the Port Cellars. In the present, they are used to tour the river Douro. We highly recommend doing a cruise, the most simple tour is passing through Porto’s six bridges. There are also tours to the Douro Valley (another world heritage site), which are one of the best day trips from Porto. It is a fantastic experience, especially during the harvest season.

On this day we are going a bit further away from the city center, we are going to the beach and the park. Unlike the other days where everything was within walking distance today, you will need to catch the metro or bus. Or if you are in shape you can always rent a bike.

This park is fantastic. Besides being huge, it has 83 hectares and about 10 km of pathways, the park ends with a beach. So when you get tired of resting under a tree you can go for a dip in the sea. The park also has several lagoons with ducks, football courts, and plenty of space to play and do sports.

As we said, the city park leads to the beach (international beach). Where you can sunbathe, swim in the sea, or even just have a drink with an ice cream in the numerous coffee houses on the seafront. Next to the International beach, you will find Matosinhos Beach which is a famous surfing spot. You can rent surfing gear or have surfing lessons if you wish. Be aware that the seawater in Porto is quite cold.

Porto has an extensive boardwalk that extends from the Ribeira (Porto’s historic center) to the Beach of Matosinhos. The pathway goes along the Douro river and then the sea. It has an extension of 10 km, so it is a long walk, but it’s well worth it. Foz is the neighborhood where the river debouches into the sea, and it is a very charming zone. Along the way, you will pass through two forts, several beaches, parks, monuments, and the museum of World of Discoveries.

What to eat in Porto

One of the best things to do when visiting a city is trying the local food. And if you are planning a trip to Porto, you should definitely keep in mind that it is a fantastic foodie destination. The Portuguese love to eat, and when they are not eating they are talking about food. Portuguese cuisine is very rich and in the north of Portugal, you eat very well, with big portions and at budget-friendly prices. When visiting the city, some of the dishes you should try include:

Author bio: Jorge & Claudia are travel bloggers from Portugal. They love exploring and talk about their own country. In Portugal Things the explore the history, culture, food, and the best destinations in Portugal.