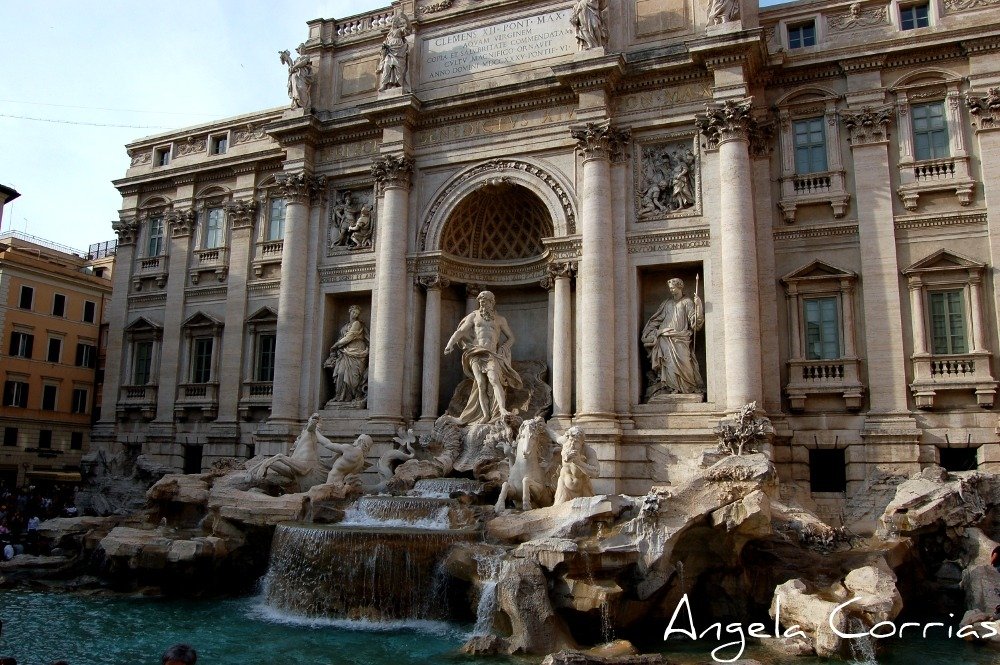 In Rome shops displaying the latest fashion trends, the smell of fresh bread and ragù and loud car horns make clear to tourists that they are not only visiting the Italian capital, but they are also experiencing it. Because walking in Rome is an all-encompassing experience in itself and a great destination to honeymoon in Italy.

Walking in Rome down Via Ottaviano to Piazza Risorgimento, we’ve always been discouraged to join the queue standing for hours alongside the Vatican Walls, under no matter which weather conditions, and proceeding amazingly slowly towards the longed-for entrance of the Museums. But one day we haphazardly found out that the lineup we’ve never wanted to face didn’t embrace only travellers religiously waiting to admire Michelangelo’s masterpiece at the Sistine Chapel, but also tourists, as well as locals, as much religiously clamouring for ice cream at the tiny gelateria “Old Bridge”.

In all of Italy, the ice cream is not simply a passion but, especially from Rome southward, a ritual. During the mild wintertime, the ice cream shops are a friendly way to spend your Sunday afternoon, during the hot summer days the gelateria is seen as a blessing, an oasis of life in the desert.

With all the patience we managed to muster, we finally got to the ice cream display. Our fantasies over that mouth-watering show of colours were quickly interrupted by a matter-of-fact assistant who brought me back to reality with a hasty: “Che gusti?” That was exactly our point, we just needed a bit more time to make our decision among all those flavours: chocolate or strawberry? Lemon or gianduia? Make a point of having a proper gelato, it’s absolutely one of the best things to do in Rome.

After leaving behind us an increasing queue, we grabbed one of the green benches in Piazza Risorgimento to fully enjoy our choice of pistachio and stracciatella and dark chocolate and hazelnut, while watching amused the hustle and bustle of this old and evergreen European capital that shows no sign of cooling. As the main city of a country rich in history and culture, in Rome, every corner has been the theatre for some historical event or at least the set of a movie.

READ MORE: Check out our extensive guide to the best restaurants in Rome!

Walking in Rome to delve into its art and history

The proud collaboration of ancient civilization and modern trends, walking in Rome allows its visitors to swan around where some of the greatest decisions of the Roman Empire were taken. From Piazza Risorgimento, we made our way through Via di Porta Angelica to St. Peter’s Square, the sacred place that I’ve crossed almost every day during my college years I spent in Rome.

Now, many years on, here I was, with my husband, joining the tourists and staring at the basilica as if it was my first time. Vatican City has been wrapped in a mysterious atmosphere since its creation and today, after Dan Brown’s bestsellers [easyazon_link identifier=”0307474275″ locale=”US” tag=”chasingtravel-20″]The Da Vinci Code[/easyazon_link] and [easyazon_link identifier=”074349346X” locale=”US” tag=”chasingtravel-20″]Angels & Demons[/easyazon_link], admiring the cathedral symbol of the Catholic papacy inevitably makes you travel with your mind back in time. The basilica lies at the heart of the tiny Vatican City and is surrounded by the wonderful Vatican Gardens visible from the top of the Sistine Chapel, the square and the Vatican Walls and Museums, certainly some of the best places to visit in Rome.

The first thing you notice when you walk through the massive bronze doors of St. Peter’s Basilica is the myriad of tourists whispering in every sort of language and permeated by the characteristic smell of incense. Despite the countless pieces of art that populate the cathedral, the main attraction is Michelangelo’s La Pietà, representing the Holy Mary holding her dead son in her arms, the symbol of the universal pain that crosses countries, cultures, and civilizations.

Stunned by the architectural perfection and majesty of the inside of the temple, you will have a clear idea why so many writers and filmmakers have been captivated by this symbol of ancestral power when you enter the crypt underneath the church.

READ MORE: Thinking about travelling to the Eternal City? Check out our detailed guide to Rome for first-time visitors and not only!

Leaving the cathedral and crossing the square framed by the massive columns, we carried on walking in Rome heading to Corso Vittorio Emanuele, first through the wide Via della Conciliazione, leaving Castel Sant’Angelo on our left-hand side and crossing the Tiber. We chose first to turn right and ended up in Piazza Campo de’ Fiori where stands tall and imposing the statue of the philosopher Giordano Bruno, in the exact place where he was burnt at stake by the Catholic Inquisition in 1600 after being found guilty of heresy.

Today, Campo de’ Fiori is far from being the usual tourist place and the locals simply love it, making it one of the alternative hubs of the city, with pubs and trattorie surrounding the piazza open until late night. Every morning a colourful open-air market selling all sorts of homemade local delicacies gives the casual tourists an idea of the loud and easygoing personality of Rome’s inhabitants. Either here or in other neighbourhoods, make sure you visit a local market, one of the best things to do in Rome.

The smell of regional cheeses, bread, and roasted meat captured me in Campo de’ Fiori and didn’t leave me until we reached, on the other side of the main street, Piazza Navona, the meeting point for dancers, musicians, mime artists, and painters. From Roman Holiday to The Talented Mr Ripley, the wide sunshades of the bars around the Piazza have been taken as a benchmark for romance and style by filmmakers and writers of all times.

If you are travelling to Rome for the first time, do stop in Piazza Navona, the symbol of elegance still today where once a year the biggest names in the Italian fashion industry gather to introduce their new collections. Not only are the works of art in the piazza aesthetically beautiful, but they also enshrine their artists’ personality and temperament. According to the legend, Gian Lorenzo Bernini built the Four Rivers Fountain in the middle of the square with the statue representing the Rio della Plata protecting its face as if worried about the imminent collapse of the church just opposite, masterpiece of his competitor Francesco Borromini, and the Nile covering its eyes to spare itself from that unpleasant vision, all in a fierce baroque-style smear campaign.

Heading east, we wound up in Fontana di Trevi, one of the most impressive things to do in Rome for anyone travelling here for the first time. With this view, the notion of glamour that Italy boasts becomes suddenly clear. Evocative of elegance, power, and sensuality, this famous fountain has been the setting for the unforgettable scene of Fellini‘s Dolce Vita in which Anita Ekberg, in her off-the-shoulder black dress, dives into the water and invites Marcello Mastroianni to join her.

Surrounded by beauty, the Italian people have an innate bewitching demeanour. Undoubtedly, Rome’s charm stems from the epic events of the Roman Empire, and strolling from Piazza Venezia all along the Fori Romani we reached what can, by all means, be considered the soul of the city, its inhabitants, and its history. The Colosseum has been silently witnessing some of the cruellest real shows in history when the gladiators’ lives were at the mercy of the emperor’s mood and thumb. Today’s lesser muscular gladiators hang about much more gleefully at the entrance of the amphitheatre, posing for tourists’ cameras.

I don’t think I’ve ever met people as proud and conscious of their past as the Romans are. From the small trattorie to the souvenir shops, walking in Rome you would imagine anytime to bump into some white togas burst into the bustling modern life to choose their favourite wine for a couple of bronze sestertii.

READ MORE: Are you planning a trip to Italy’s capital? Check out what to see and do in Rome in 4 days.

PIN ME FOR LATER?

Things to do in Florence, your guide to the cradle of the Renaissance

Things to do in Milan, whether you are going on a business trip or for leisure

Your perfect day trip from Florence to Pisa

1 thought on “Walking in Rome, a journey through art and history”