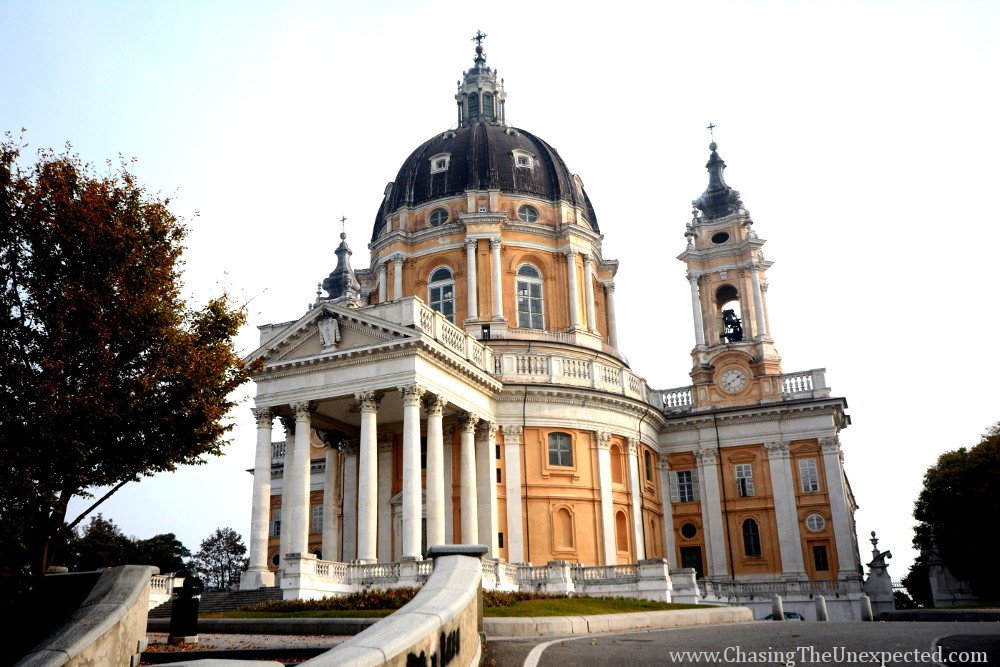 One of the best day trips from Turin is the beautiful Superga Basilica. A gem of Piedmont Baroque style, this is a project by Sicilian architect Filippo Juvarra. In its underground, you can visit the Savoys tombs, while from its terrace you can admire the view French philosopher Rousseau defined “the most beautiful sight the human eye can see”.

READ MORE: Check out our detailed guide to the top things to do in Turin.

History of Superga Basilica in Turin

To understand the reason why they needed to build a basilica on a hilltop, we need to go back some 300 years. It’s 1700, and Charles II of Spain, the last Habsburg King, on his deathbed at only 38 years old, designated as his successor Philip Duke of Anjou, the grandson of Louis XIV, as suggested by the Pope to avoid the Habsburg hegemony. On November 1st, 1700, at the death of Charles II, Louis XIV of France proclaimed Philip of Anjou as the king of Spain with the title of Philip V.

Not everyone, however, agrees with this decision, as they see the French kingdom dangerously expanding. The other European kingdoms formed an alliance against the French House of Bourbon. And this started the 14-year War of the Spanish Succession.

At first, Vittorio Amedeo II Duke of Savoy sides with the French. In 1703, however, the French take a sudden U-turn and arrest half of the Savoy troops. Even though aware that it was a heavily unfair battle, Vittorio Amedeo II wages war against France and turns to his cousin, Eugenio of Savoy-Soissons, a general at the service of Leopold I, for help. Leopold I, emperor of Austria, agrees to send some 27,000 troops. By the time they get to Turin, they have increased to 33,000.

In May 1706, however, Turin is under the siege of 44,000 French-Spanish troops. A siege that will last for 117 days. The night between the 29th and the 30th of August, the Franco-Spanish army will try to enter Turin via the tunnels of the citadel’s dungeon. Soldier and now national hero Pietro Micca, aware of this, blows up the tunnels using a short fuse after sending away his comrade. Despite taking the necessary 40 steps away from the explosion, the blast wave kills him. The French-Spanish troops, however, don’t enter Turin.

On September 2nd, 1706, the two cousins, Vittorio Amedeo II and Eugene of Savoy-Soissons, are on the Superga hill to have a better view of the troops under siege and of the whole Turin’s plain. But also because here was the statue of Our Lady of Grace, in front of which they made a vow: if they managed to defeat the French troops, they would build a church there.

On September 7th 1706, the Austro-Savoy troops attack the French-Spanish army. Around midday, the latter seems to be winning, but around the evening the outcome is overturned and Turin is free. The fulfilment of the vow, however, will have to wait another ten years. With the Utrecht Treaty, in fact, Vittorio Amedeo II of Savoy becomes the ruler of Sicily, and to better get to know his new citizens, he spends one year living in Palermo. Here he’s crowned king of Sicily and meets Filippo Juvarra, Messina-born abbot and great architect. The king is a big fan of Juvarra, and when he returns to Turin, he nominates him the official architect of the royal family. Many are the buildings designed by Filippo Juvarra in Turin, and among these, one of the most famous is the Superga Basilica.

In 1717, the works for this beautiful 75-mt-tall baroque basilica started and in 1731 it was inaugurated. It stands at 672 meters above sea level and its interiors are decorated with Carrara marble and masterpieces by Francesco Borromini.

What to see in the Superga Basilica

As soon as you get off the train that from Turin takes you to Superga, you will walk a little path up to the famous basilica and visit the church itself.

Next to the church is the office where you can buy a ticket to the Savoy Royal Tombs and choose if you want to add also the apartments. For a perfect day trip from Turin, you can visit both complexes and stop for lunch in the local restaurant. You will spend a day out in nature far from the city’s traffic and hustle.

Designed by architect Francesco Martinez, Juvarra’s grandson, the complex of the royal tombs is located in the undergrounds of the Basilica of Superga and houses 62 Savoia’s graves.

The Savoy tombs are impressive and finely decorated with great artwork and sculptures. Most members of the Savoy dynasty are buried here, while those of the last kings are in Rome’s Pantheon. Some of the Savoys buried in Superga Basilica are Vittorio Amedeo II, founder of Superga Basilica, Carlo Emanuele I, Carlo Emanuele III, Carlo Alberto, and Ferdinando di Savoia, Duke of Genoa and father of Margherita, the first queen of unified Italy.

Alongside the tombs of the kings, you will visit the Hall of the Queens and the Hall of the Infants. In the Queens Hall are the white marble tombs of Maria Teresa di Toscana, wife of Carlo Alberto, and Maria Adelaide D’Asburgo. Even though the wife of King Vittorio Emanuele II, she never became queen of Italy. She died, in fact, before the unification in 1861 from typhus fever and made weak from the several pregnancies.

The Hall of the Infants was designed to host the resting place of the members of the family who died young. It hosts 14 children and nine adults.

If you decided to stay also for the apartments, the tour will start after a short break from the tour of the tombs. The visit to the Royal Apartments is very interesting as you can view all the original furniture, decorations and rooms. A perfect way to learn and understand how the Italian crown was living back then.

The original furniture of the Royal Apartments was stolen by the French troops of Napoleon, famous for looting whatever they could during their short occupation of Turin at the end of the 18th century. The French army also wanted to destroy the mausoleums and scatter the ashes of the Italian royal family, but they were kindly talked out of this by the members of the basilica’s religious order.

Superga Basilica is often sadly remembered for the plane crash against the back of the building where all the members of the Torino soccer team lost their lives on May 4th, 1949.

Get here all the practical information you need to visit the Basilica of Superga, how to reach it from Turin with public transport and how much is the entrance fee.

How to get to Superga Basilica from Turin

If you are in Turin city centre, take the tram 15 from Piazza Castello or buses 68 or 61 from Porta Nuova station and get off at Sassi.

From here, take the train on the old rack railway to Superga. It leaves every hour starting at 10 am and the ride takes some 20 minutes. Timetables change depending on the season, the tourism office will be able to provide the updated timings.

The entrance to the basilica is free of charge. The tour to the royal tombs or the apartments costs 5 € for adults, 4 € for older than 65 and students and is free for younger than 12 and holders of the Torino+Piemonte Card.