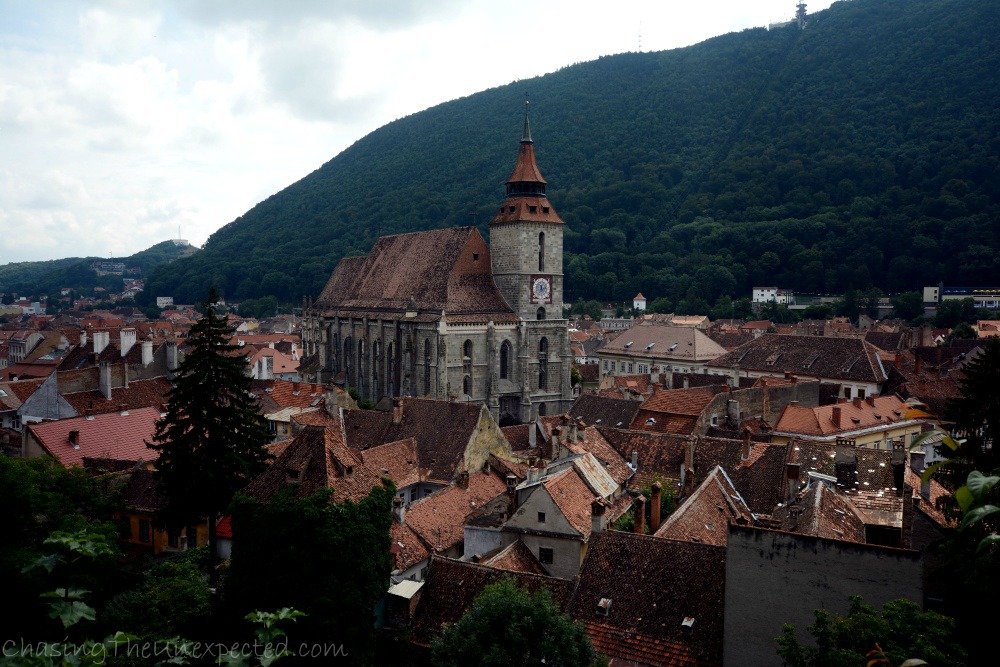 After enjoying the beauty of, and soaking in, the clean nature of the Prahova Valley, the following stop of our Romania trip was the (in)famous region of Transylvania, mainly known for the Count Dracula’s castle, even though, how I will have the chance to better explain in my next post, little he had to do with the not-so-spooky mansion located in the town of Bran.

Our base in Transylvania was Brasov, a city where all the typical travel-writing-like attributes are appropriate, from quaint to picturesque to charming. Brasov, as a matter of fact, aptly located near the intersection between Transylvania, Moldavia and the historical region of Wallachia, is all that, and you’ll know it as soon as you step out of its train station and make your way towards central Piata Sfatului, from where our journey unfolded.

If you are into quaint backstreets, cobbled alleys and historical buildings, the Brasov beyond the very city center (meaning by that Piata Sfatului and cafe tables-clothed Republicii Street), is your type. The immediate vicinity of Piata Sfatului will quickly welcome you in a slightly gothic medieval surroundings populated by churches, buildings and gates belonging to different eras.

Strategically positioned along the mighty Carpathian range between winter resort Bucegi Mountains and the Bran Castle, Brasov is one of the main tourist centers in the area. It will suffice to see the long line of tables and respective umbrellas to protect from the summer sun and clog the view on the traditional houses located all along what looked like a traditional street (before the table umbrellas), to understand that tourism does play an important role in the local economy. Close to Piata Sfatului lies the famous Black Church (Biserica Neagra), 500-year-old gothic basilica, the biggest of its kind in Transylvania.

The church hasn’t had a very happy life: the construction started in 1380 and in 1421 a big part of it was destroyed during the Turkish invasion. Rebuilt in 1477, a fire partially destroyed it in 1689, turning its walls smoky black, episode that determined its future name.

As Brasov has retained much of its medieval legacy, it really seemed that the Middle Ages were becoming the permanent trait of our stay.

From the Black Church, the Ecaterina’s Gate is only a short walk. Erected in 1559, it’s the only gate from medieval times that survived in its authentic structure up to today, albeit without positioning there the entrance to the city anymore. Likewise, from Ecaterina’s Gate it’s only a 15-minute walk to start climbing up to the fortified citadel just outside the city walls.

This is where you’ll have the chance to both enjoy fantastic views on Brasov heart and its beautiful red pitched rooftops, and take a stroll outside the ancient city walls and visit the watchtowers of the fortress, the Black Tower, built around 1400 for defence purposes and for spotting the approaching enemies, and the White Tower, built between 1460 and 1494 outside the north-western walls.

If this doesn’t seem enough of a medieval experience to you yet, you can take the bus or a taxi for a short ride to Rasnov, a town that at first sight doesn’t seem to offer much but that is actually home to a fascinating medieval citadel, perfectly preserved and exuding features from the past at every step.

As a proper citadel, it has the windows from where they could spot the enemies or throw some arrows at them, cobbled and winding alleys, fortified towers and gates, and makeshift dwellings for the villagers who were forced to seek refuge there during the invasions. When I visited the citadel there were many people wearing medieval-style clothes, not sure whether it was a daily routine for its staff, or in occasion of some festival or special event, but it certainly added to its yesteryear atmosphere. Apart from clothing, here you can also polish your medieval archery skills with an aptly created arch.

The fare from Rasnov to Brasov is either 30 RON (less than 7 euro) by taxi or between 3 and 5 RON (less than 1 euro) by bus, depending on which bus you take. Since we were three and it was raining, we opted for the taxi to get back to Brasov and get ready for the trip we had in mind for the day after, the castle of notorius Count Dracula, king of all vampires, located in Bran, which will be the topic of my next post along with the vampire-based folktales and their role in oral and written traditions in Romania and worldwide.

In Brasov we stayed in the very heart of the city, Piata Sfatului. When we booked we did set “city center” as a preference, but without guessing we almost became a tourist attraction ourselves. Nevertheless, the hotel, Casa Wagner, was absolutely lovely, the staff friendly and helpful in anything we needed, and the breakfast offering something for just about every taste. Our room, modern and spotless, was up a little stair and along a quaint, flower-decorated corridor, and from our window we could see the nearby Black Church.

It’s usually the small details that add to the feel of a place, and wandering Brasov’s backstreets and citadel these range from cute red berries peeping out of their green leaves, to the city’s coat of arms, a crown with oak roots to symbolize Brasov Latin name “Corona”, still now proudly displayed everywhere, to delicious cafes that if at first sight are even invisible, once you’ve discovered them you’ll be proud of yourself, just as I was.