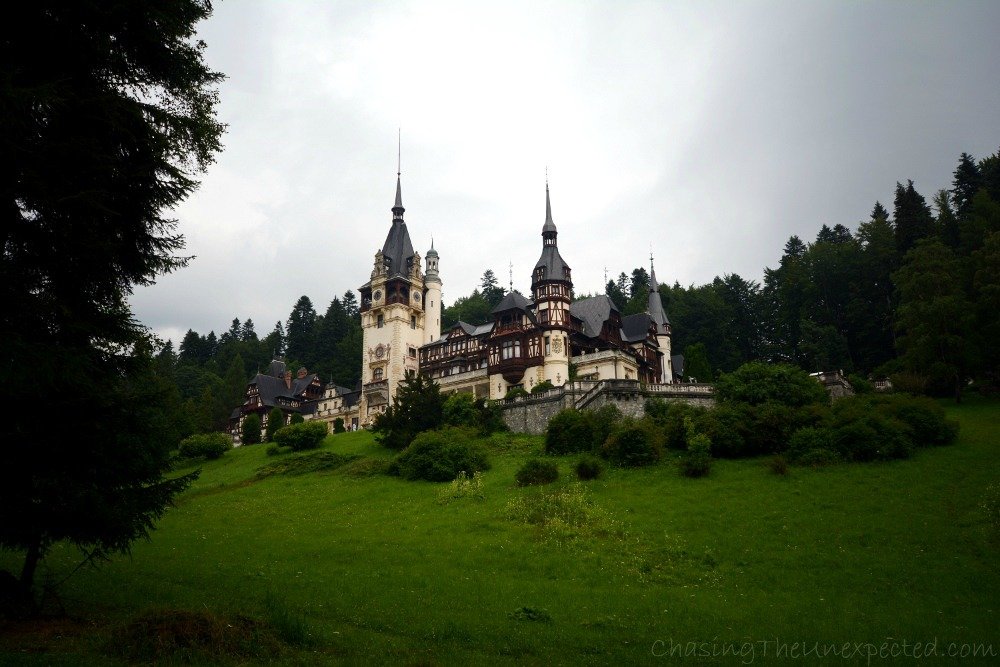 Picture yourself wandering around half-empty roads framed by slightly gothic houses with medieval features somehow resembling gnomes’ residences. Here a car passes by every two or three minutes, all in the backdrop of the dramatic, snow-covered peaks of the Carpathian range. You are in Romania’s Prahova county.

I won’t deny it, I’m very tempted to unleash an essay of hackneyed expressions such as frozen in time, or feeling like stepping into a fairy tale, or whirling back in time. But that would be too easy.

Sinaia, winter resort of the Prahova county and “Carpathian pearl”, is much more than that.

Rather than frozen in an ancient times, this quaint town of Prahova county, dominated by the mighty Bucegi mountains, is caught somewhere between the 1980s and 1990s. Which, admittedly, did make me feel somehow back in time, just not as ancient, rather to when I was in primary school. Sort of.

The reason why I felt stepping back to only two decades ago, apart from the clothing style of some, was the radio, awkwardly playing those dance beats I thought I had successfully consigned to the remotest reaches of my mind, alongside some cheesy 80s Italian songs by evergreen Albano & Romina Power, Toto Cutugno and so on and so forth, way too popular in today’s Romania. If you are a little familiar with Italy’s ’80s, you’ll know what I’m talking about.

While Sinaia seems a humble little town with not much to boast, if you dig a little deeper you might find out that here there are enough places to see, monuments to photograph and things to do to fill a whole vacation. Not to mention the outdoor winter activities, for which the Prahova county might well be your dream destination to add to your Romania itinerary. I went in July, and although I do like summer temperatures, I can’t deny Sinaia’s breezy weather was a pleasant break from European scorching sun.

Recently, I’ve been enjoying, and longing for, a repeated contact with nature, so during my three-day stay in Sinaia my cousin and I didn’t waste the occasion for soaking in the scenery Mother Earth has blessed the region with, precisely the nearby Bucegi mountains, the peaks we could admire from Sinaia and that were inevitably luring us.

Our original plan for the first day in the Prahova county was to start from nearby town Busteni, visit its Cantacuzino castle, suggestive residence of the Cantacuzino noble family of Wallachia, and then take the cable car to reach the famous attractions of the Sphinx and Babel, two particular rock formations. However, after trying our luck twice and seeing a huge, possibly two-hour-long queue, we started feeling a little despondent.

When we approached the queue and started mulling over whether or not it was worth waiting, an eager tour guide illustrated to us the outing he and his company arranged. Even though we are not used to just get on a random tour, we did a quick brainstorming session comparing prices, timing and the possibility to see and experience more of the natural heritage with a local rather than by ourselves. Before we knew it, we were joining other three tourists on the jeep of our driver for the day, a lanky young boy who barely showed an age fit for a driving license, let alone taking us up and down around the steep slopes of the mighty Carpathian range. We boarded the car nonetheless, and got ready for the breathtaking views the guide described in his sales pitch. The jeep was mandatory, he explained, “as you might find some dirty patches along the way”. Fair enough, that’s why we were going, after all.

Not long after leaving Busteni, our roller coaster around the Prahova county began.

This seemingly fledgling driver of ours was as reckless as his job required for both entertaining his guests and having the nerve to go back to those mountains every day. Once on the slopes, he set off at full tilt throwing caution to the wind. Or so it appeared to us, naively unprepared and unused to such adventure.

Driving on the very edge of steep cliffs and soaring to occasional rises to quickly drop into the following dips were only some of the experiences that made our roller coaster tour epic. Stopping to marvel at the views and visit places such as a cave monastery and bizarre, face-shaped, rock formations added to that, making us quite happy of our last-minute decision to give up on the queue in Busteni (just for the record, and the sake of practicality, the tour cost us 75 RON each, which is about 17€ and 23USD).

I’m not a very athletic person, I merely do pilates three times a week, so this is probably why even though we did most of the tour by car, once back at the hotel I felt like I did it running. However, much to my self-esteem, the tour did involve some sporadic getting off the car and climbing stunts.

Enclosed by the Bucegi mountains and nestled in the Prahova Valley, Sinaia only at first sight looks like the average inland town that much clings onto tradition. Visiting its sights, in fact, we learned that its name stems from the Mount Sinai nonetheless, and was given by Mihail Cantacuzino, the brother of Gheorghe Grigori Cantacuzino, owner of the castle we had visited in Busteni the day before.

After his pilgrimage to Saint Catherine monastery on Mount Sinai, Mihail Cantacuzino went back to his home country and commissioned the building of this monastery, the oldest part, erected between 1690 and 1695. Latin cross-shaped, Sinaia monastery is one of a kind in Romania and apparently gave origins to a whole new architectural style, Brancoveanu style, also known as Wallachian style.

15-meter tall, 15-meter long and 6-meter wide, this little church boasts paintings of Romanian famous artist Parvu Mutu, along with frescoes on its outside walls representing moments of Saint Catherine’s, Saint George’s and Saint Demetrios’ lives, and with scenes from heaven and hell framing the entrance door.

When the old monastery started being too small for the monks living there, who by the nineteenth century reached the number of 70, between 1843 and 1846, the new premises were built under the supervision of the abbots of the time, Ioasaf and Paisie. Fine carvings and a Byzantine-style oil painting portraying important figures such as former Romanian ruler, king Carol I, bishop Iosif Gheorghian, queen Elizabeth, local princess Maria and the same Mihail Cantacuzino decorate the elgant interior.

The very last sight we visited in Sinaia was the eerie and lavish Peles Castle, majestic mansion of king Carol I, who spent there six months every year. The castle is so huge that the ticket clerk gives visitors the chance to choose between two types of tours, one that involves half of the castle, and one including the whole royal residence, up to the second floor where private rooms still have their original furniture. Each area boasting the style of a different country, symbolizing the travels the king himself had embarked on, the castle retains the soul of its former residents, making a visit there more precious than a museum tour, where tools and objects are displayed out of their context often losing their identity.

As the Peles Castle was a very charming stop in our tour, here is a small photo essay I devoted to it.

If you are arranging a bigger trip of Romania like we did, three days can be enough for Sinaia, but if nature and outdoor activities are your main interests, a longer, relaxed stay here won’t be a waste of your time.