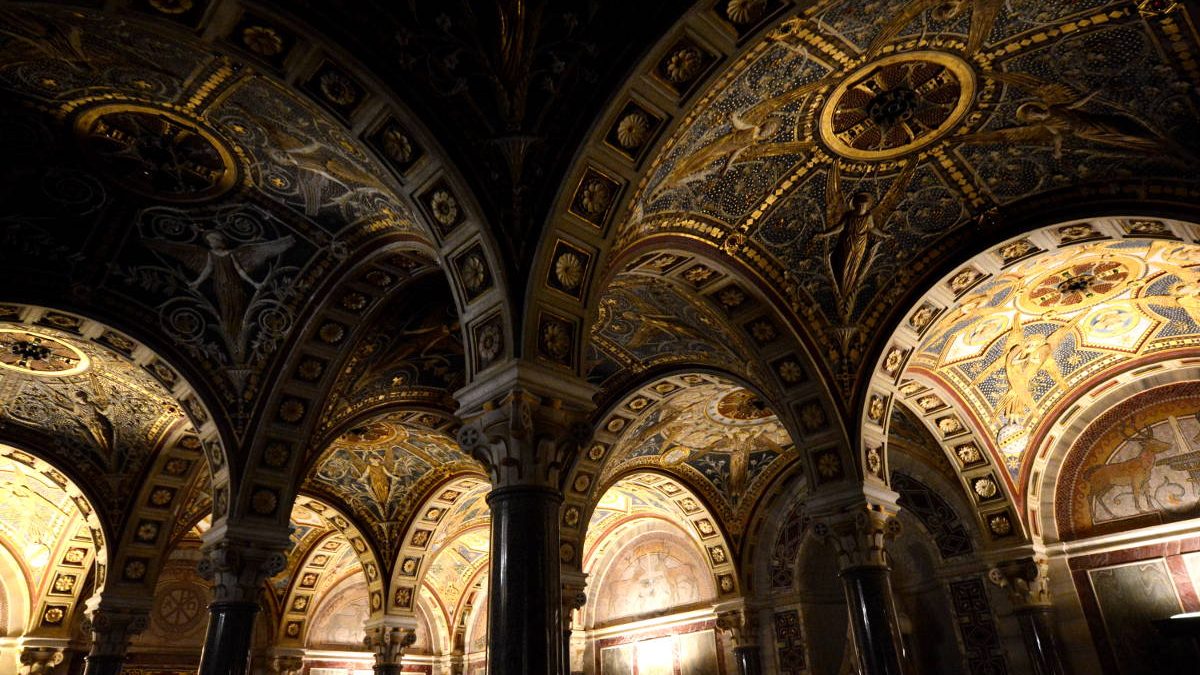 For every place you visit in Rome, you can be sure there is something more to see underneath. With the many underground tours of Rome, you can delve deeper into what intriguing and mysterious hides underneath the Eternal City. Every time I take a Rome underground tour, I discover another piece of history that was saved from oblivion.

It’s fascinating to realise that under all the beautiful buildings you see and photograph when you visit Rome hides a whole world. Taking one of the many underground tours of Rome, be it a Colosseum underground tour or a Rome catacombs tour or descending to a Domus, will capture your imagination and make for an unforgettable trip.

Which catacombs to visit in Rome? Where are Rome crypts and catacombs? Which private tours of Rome show you the underground world? Read everything about our experience exploring Rome underground by ourselves as well as taking some of the best underground tours of Rome.

Each of these underground tours of Rome will take you to different places. Some places are more common and you will find them in more than one tours but combined with different sites. So you can see which tour is the best fit for you depending on what you prefer to visit.

As I was planning something alternative to the usual man-made wonders you can see under the sun, I took a fantastic Rome underground tour with Take Walks.

Rome Capuchin Crypt always delivers what its reputation promises: an eerie cemetery where only a handful of its alleged 3,700 corpses are buried according to the proper Christian ritual, while the rest couple of thousands are pieced together and displayed for posterity. The sacred place has been hosting the remains of the Capuchin friars from the above monastery until 1870. Periodically, corpses had to be exhumed to make space for other bodies and their bones were kept in a charnel house, until they decided to expose them in a creative way.

As soon as I entered, I sneaked across a narrow corridor flanking a series of crypts and chapels. I soon found the Resurrection Crypt, where human bones are set as a very artistic frame to the painting representing the Christ resurrecting Lazarus.

Still in slight disbelief from seeing so many bones all at once, we arrived at the crypt of the skulls, with a winged hourglass symbolizing the time flying on display. I carried on at the crypts of the pelvises, of the tibias and femurs and of the three skeletons. Here was a small skeleton, belonging to a princess of the Barberini family. Hanging from the ceiling, she held a scythe, symbol of Death, on her right hand, and balance scales, the symbol of divine justice, on her left hand.

And if this wasn’t creepy enough, on the floor of one of the first chapels/crypts there is a stone slab with a gentle reminder: “What we were, you are now. What we are, you will be”.

Carrying on with our Rome catacombs tour

This Rome underground tour with Take Walks carried on with a visit to Priscilla Catacombs at the entrance of Villa Ada Park. Like in many other Rome catacombs, we saw ancient frescoes (here is thought to be the very first depiction of the Holy Mary), the cubicles where early-Christian tombs were arranged and the altars for the functions.

Which catacombs you will visit during this Rome tour will change depending on availability, but there is always one included. Some of the most popular catacombs in Rome are Santa Priscilla, San Sebastiano, San Callisto and Santa Domitilla.

The Roman Houses of the Celio Hill is an extremely fascinating stop. You will descend to different layers of Roman history and visit a domus, the house of a wealthy patrician family, as well as an insula, house of the working class also used as shop and workshop.

We enjoyed the tour as the guide was very knowledgeable and also we had an air-conditioned private vehicle driving us around from a place to the other, making the whole trip much more relaxed.

You can also choose a similar Rome crypts and catacombs tour at night after closing time. In this version, you will enter Rome catacombs when the other visitors are gone so the place will be for your group only.

The Capuchin Crypt, also known as Bone Chapel, is included, while the Case Romane del Celio are not. The catacombs you will visit are the ones of San Sebastiano. This Rome catacombs tour lasts 2 hours and a half and your group won’t be bigger than 18 participants.

Click here to book this underground tour at night.

Here you won’t be seeing frescoes, bones and cubicles like in the catacombs, because the Colosseum underground had the purpose of a sort of backstage. This is where the gladiators and the animals waited to participate in the show. You will see the Colosseum underground tunnels and you will understand the complicated mechanism that brought the fighters to the Arena floor.

Among the underground tours of Rome, this is one of the higher in demand because of the special access areas. You will also visit the general access areas, but you can only enter the Colosseum underground with a certified guide.

After this in-depth visit to the Colosseum, you will head to the Roman Forum and Palatine Hill, the pulsing heart of politics and trade in Ancient Rome. These archaeological sites are wide and complicated to comprehend by yourself. This is why a tour is always recommended.

There is also the possibility to take a Colosseum underground tour at night after closing time when the crowds are gone.

Click here for more info and to book this night tour.

READ MORE: Travelling to Italy? Discover how to spend 4 perfect days in Rome!

This is a small group tour of maximum 6 participants and starts at the San Clemente Basilica in Via Labicana, not far from the Colosseum, a very interesting historical site as you will explore several layers of Roman history.

Starting from the medieval basilica located on the modern-day street level, you will descend to a 4th-century early-Christian basilica and then down another layer to a 2nd-century Mithraic temple and school. Here, you will have the chance to walk around a little Roman neighbourhood, a narrow street and visit what is thought to have been a Roman mint.

The next stops will be two different Rome catacombs that served as burial sites of the first Christians as well as early popes and Roman Christian martyrs.

Included in this Rome catacombs tour are skip-the-line tickets to all the sites and an expert local guide.

This is one of Rome underground tours to the Colosseum, the Roman Forum and the Palatine Hill that will have a fascinating last stop at Nero’s Golden House, the famous Domus Aurea.

The parts that you will access in the Colosseum are the first and second levels before entering the Forum and the Palatine Hill to explore the pulsing heart of ancient Rome and where the noble families liked to build their villas.

In the Domus Aurea, you will have the chance to visit the underground rooms and corridors of Rome’s fantastic Domus Aurea that has been under renovation for years on a virtual reality tour using 3D glasses. Some of the areas you will visit in this underground tour of Rome are the Octagonal Room, Cryptoporticus and Nymphaeum of Polyphemus. Finally, you will watch the Golden Vault with your pair of 3D glasses.

READ MORE: In Rome and you don’t know where to eat? Check out our guide to the best Rome restaurants.

5. Rome underground tour with two Basilicas and the Forum Boarium

This tour starts at the Forum Boarium, a sacred and commercial area where there were the cattle market and several temples such as the Temple of Hercules Victor and the Temple of Portunus. With this Rome tour, you will visit both of them.

From the modern Santa Cecilia Basilica, you will get underground to visit the stunning crypt and under Saint Chrysogonus Basilica you will go down to an earlier church dating back to the rule of Emperor Constantine.

If you want to explore Rome catacombs in a deeper way, you can also book a tour to a single underground graveyard. With 90 acres and some 12 miles, St. Callixtus one is one of the largest and most important catacombs in Rome. Located on the Appian Way, this is the resting place of several martyrs and no less than 16 early popes.

The tour takes about 2 hours and you will get there from near Termini with a private vehicle. Their guides can lead in English, Spanish, French, German and Italian.

You will kick off this 2-hour tour of underground Rome near the Trevi Fountain to visit a place not many people know of. The Vicus Caprarius is the archaeological area next to the Trevi Fountain often overshadowed by its more famous neighbouring landmark. Located some 9 metres below street level, in Vicus Caprarius you will visit a Roman insula, a sort of compound with several units later transformed into a wealthy patrician domus.

This Rome underground tour will lead you through the path of the Aqueduct of Aqua Virgo and continue to the huge Domitian Stadium on top of which Piazza Navona was built. A true journey through the layers of Roman history and its most pivotal moments.

This is another of the Rome underground tours that will show you some of the best catacombs in Rome. This time, the Domitilla Catacombs in the Ardeatino quarter, close to the Catacombs of St. Callixtus.

This Rome underground tour will take you first to San Clemente Basilica (that we saw earlier on another tour) and Case Romane del Celio, the ancient Roman houses located in the undergrounds of Santi Giovanni and Paolo Basilica in the Caelian Hill (also this, we saw it in a different tour).

The Rome catacombs tour will finish with the visit to Domitilla catacombs, pretty far from the city centre and your other stops, so you will get there by private minivan.

READ MORE: Check out our full guide to 95 things to do in Rome!

READ IT LATER? PIN IT TO YOUR BOARD!