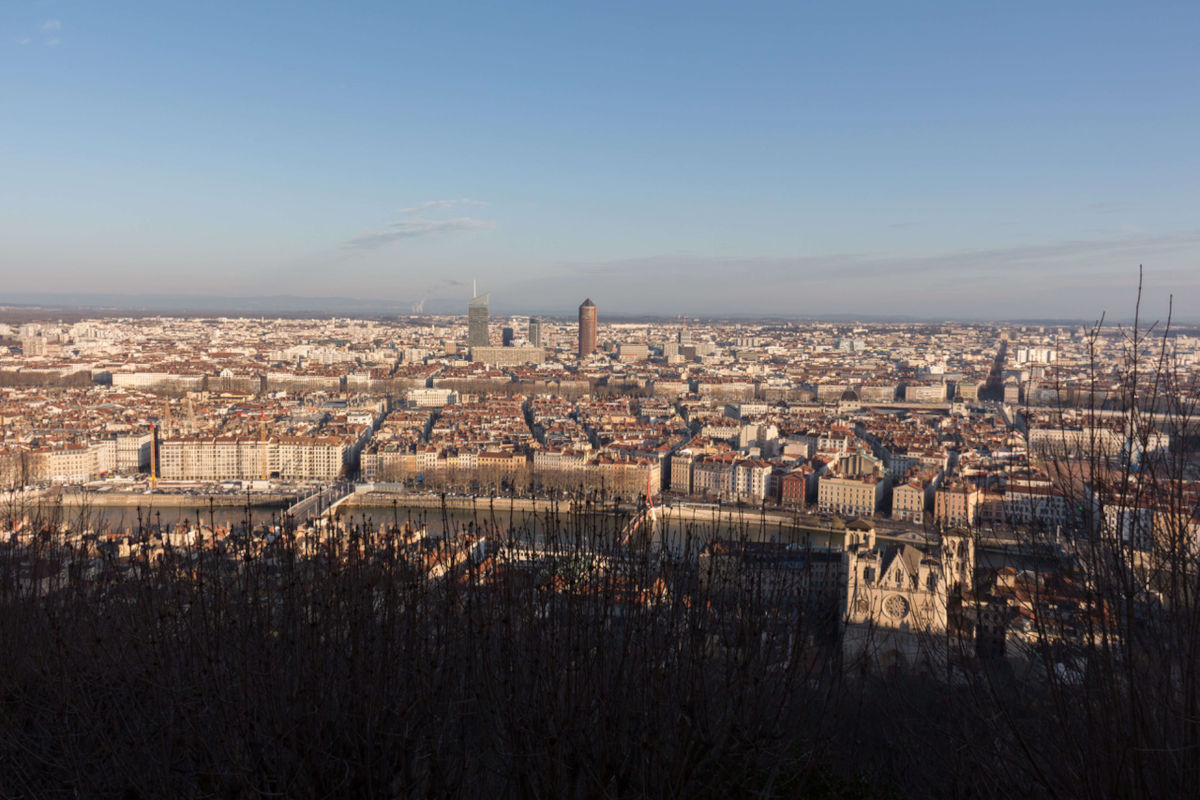 If you are wondering if 2 days in Lyon are enough to explore the city, check out our simple step-by-step guide to plan a perfect trip to the beautiful French town.

France’s third-largest city, Lyon is the capital of the Auvergne-Rhône-Alpes region, neighbouring with other French regions such as Provence and Centre – Val de Loire as well as Italy and Switzerland.

This handy two day Lyon itinerary will help you explore some of the major sights and really get a feel for this lovely old town. To enjoy free museum entrances, unlimited public transport and free services such as tours and cruises, consider purchasing the Lyon city pass.

What to Do in Lyon in 2 Days – A Practical Itinerary

Your day starts in Place Saint-Jean, which is located just around the corner from the Vieux Lyon – Cathédrale Saint-Jean Metro Station.

The Cathédrale Saint-Jean-Baptiste de Lyon is a World Heritage listed Roman Catholic Church that dates back to the late 1100’s. Construction actually took three centuries to complete resulting in an unusual combination of Roman and Gothic architecture. One example of Gothic architecture that you should explore are the gargoyles, which not only act as rain gutters but also ward off the evil spirits.

The newest gargoyle wasn’t added in the 1200’s like you would expect but in 2010 and has an interesting story. The gargoyle was based on the face on Ahmed Benzizine, the master stonemason who worked on a recent church renovation. It created quite a stir in the Catholic community when the face of a Muslim man was added to the facade of a Roman Catholic Church.

On the inside of the church, you will find one of the oldest Astronomical Clocks in Europe. The astrolabe indicates the position of the sun, the moon, and the earth as well as the stars in the sky above Lyon. The clock was built in the time of geocentrism when it was thought that the earth was the centre of the solar system, and depicts the sun circling around the earth.

Wandering down the streets of Vieux Lyon and admiring the ancient facades of the Renaissance architecture is one of the best things to do in 2 days in Lyon.

Rue Saint-Jean is the main street of Vieux Lyon and one of the most popular with the tourists whereas Rue du Bœuf is known for it’s Michelin starred restaurants.

As you explore the quaint paved cobblestone streets you almost feel like you‘ve stepped back in time to days gone by. Thanks to the entire of Vieux Lyon being listed as a UNESCO World Heritage Listed Site we can all enjoy the charm of this well-preserved piece of history.

It is impossible to walk down the street of Rue Saint-Jean without stopping to buy a crepe from one of the many street vendors. Join the queue and watch as your crepe is created in front of you on a hot circular cooking plate.

A variety of tasty crepe toppings are available including Sucre (sugar), chocolate, seasonal fruits and Nutella.

Crepe restaurants (Creperie) will often have a stand outside the front of their store so you can either go inside and eat in comfort (and have access to even more toppings including ice cream) or walk along munching on your crepe while you explore.

One of the most popular activities for tourists while in Lyon is to discover the hidden passages or Traboules. There are over 40 Traboules open to the public and tourists are able to explore them between the hours of 7 am and 7 pm.

The word ‘Traboule’ means to pass through, and that is exactly what they do. Traboules are hidden passages that allow you to pass through courtyards between the buildings so you can cross from one street to the next. The earliest Traboules are thought to date back to the 4th century when workers needed to find a direct route that was out of the weather so they could collect drinking water from the river.

The tricky part about exploring the Traboules is that they are hidden away behind closed doors which makes them hard for a tourist to find.

However, there is a secret to locating them; beside each Traboule entrance, you will find a metal plaque (pictured below) mounted on the wall. The plaque will depict the Lyon coat of arms as well as a short description of the Traboule. If it is between the hours of 7 am and 7 pm then push the door and get ready to explore!

The easiest solution is to arrive in Lyon armed with a list of Traboules to try. Here are a few for you to try:

From the 16th century onwards Lyon became famous for the production of silk and for several hundred years was known as the capital of the silk trade in Europe. The thriving industry resulted in thousands of silk weavers, known as canuts, working in Lyon on over 14,000 looms.

A visit to Lyon wouldn’t be complete without buying a “Made in Lyon” silk scarf or tie.

There are several silk houses located in Old Lyon:

Have lunch at the Food Traboule

One of the most beautiful hotels in Old Lyon has reopened into a trendy food court with a difference.

Lyon is known as the gastronomy capital of France and with so many restaurants to choose from it can often be difficult for tourists to know where to go and what to order. If you have limited time in Lyon then the Food Traboule provides the perfect solution.

The three storey Renaissance building has been converted to have multiple eating areas and twelve separate twelve food booths offering a gastronomic experience as only Old Lyon could. Each of the food booths or mini-restaurants within the Food Traboule offer some of the most popular menu items from their main restaurant located in city of Lyon.

Depending on how hungry you are, just try out a few items or take your time and work your way around the entire building and taste what each restaurant has to offer.

Whatever you do, make sure you get there early to avoid the crowds!

Visit the Museum of Cinema Miniature

In the museum, you will discover movie costumes, props and special effects from some of your favourite movies including Jurassic Park, Mask, Batman, Spiderman, Robocop, Mrs Doubtfire, Return of the Jedi, Stargate and many more.

There is also an impressive collection of miniature scenes created by museum founder and miniature artist, Dan Ohlmann. The miniatures are tiny replica scenes that have to be seen to be believed!

Include a walking tour in your 2-day Lyon itinerary to discover the soul of his city. You’ll explore the Traboules, learn about local foods, the silk industry as well as the history of the French resistance and much more.

A walking tour is a great way to see the sights of Lyon and save time and money at the same time. For other ways to save money while travelling click here.

If you have some free time, spend a relaxing morning wandering through the streets discovering Lyon and its brightly coloured murals and frescoes.

Lyon first started decorating their buildings with murals in the early 1970’s as part of a program to rejuvenate what was then a very polluted industrial city. There are now over 150 giant murals in Lyon making it the European capital of mural paintings. Most of the murals can be found in Croix-Rousse district and part of the Presqu’île district.

One of the most famous murals is called La Fresque des Lyonnais. This 800 square metre mural is located on the corner of 49 quai St Vincent and 2 rue de la Martinière on the Saône side of the 1st arrondissement.

The mural depicts 30 famous figures from the history of Lyon spanning over 2,000 years. Some of the famous figures are Emperor Claudius (Roman emperor from 41-54), Joseph-Marie Jacquard (inventor of the Jacquard loom) as well as Auguste and Louis Lumière (inventors of the first motion-picture camera).

Lyon is known for their Brioche aux pralines.

A Brioche is a type of French bread and pralines are made of almonds that have been covered in pink sugar. When the brioches aux pralines bake in the oven, the pink sugar that covers the almonds melt making the brioche a speckled pink colour.

Boulangerie (or bakeries) throughout Lyon sell this local, brightly coloured delicacy. The Boulangerie on Rue Saint-Jean, Vieux Lyon is extremely popular with crowds of tourist queuing down the street.

Catch the funicular up to Fourvière Hill (optional)

Getting to the top of Fourvière Hill can be a challenge as it rises up some 300m above the rest of Lyon. If you don’t have access to a car or aren’t up to the physical challenge, then the funicular is the best solution.

There are two funicular lines that depart from the Vieux Lyon – Cathédrale Saint-Jean Metro Station; Funicular Fourvière and Funicular Saint-Just.

The Notre Dame Basilica, sits high on Fourvière hill making it a very impressive sight from the city below.

Built in the late 19th century, the white stone basilica is an unusual combination of byzantine, gothic and romanesque inspired architecture. It is actually two churches on top of one another with stairs leading from the upper sanctuary to the lower sanctuary below.

The ornate interior has beautiful stained glass windows and the walls are lined with magnificent mural mosaics.

For those not interested in visiting religious structures the Notre Dame Basilica is still well worth a visit just to see the stunning panoramic views over the city of Lyon.

Two ancient Roman theatres are located on the slopes of Fourvière Hill on what used to be the Roman city of Lugdunum.

The larger of the two theatres, called the ‘Great Theatre’ is the oldest amphitheater in France dating back to 15 BC and seats approximately 11,000 spectators. The smaller theatre, known as the ‘Odeon’, was built as an extension to the larger theatre in approx. the second century AD and was used mainly for smaller events such as musical recitals or poetry readings.

The ancient theatres are now used regularly to host popular events for the people of Lyon.

The theatres are open to the public daily, at no cost, between the hours of 7am and 7pm.

If you are interested in learning more about the origins of Lyon then make sure you visit the Musée Gallo-Romain located just next to the ancient theatre. You can find information about opening hours and ticket prices here.

Author bio: Susan is from Brisbane, Australia, and is a photography enthusiast and travel blogger at Thrifty after 50. She and her husband John provide tips on low-cost travel to over 50’s so you can travel more for less!