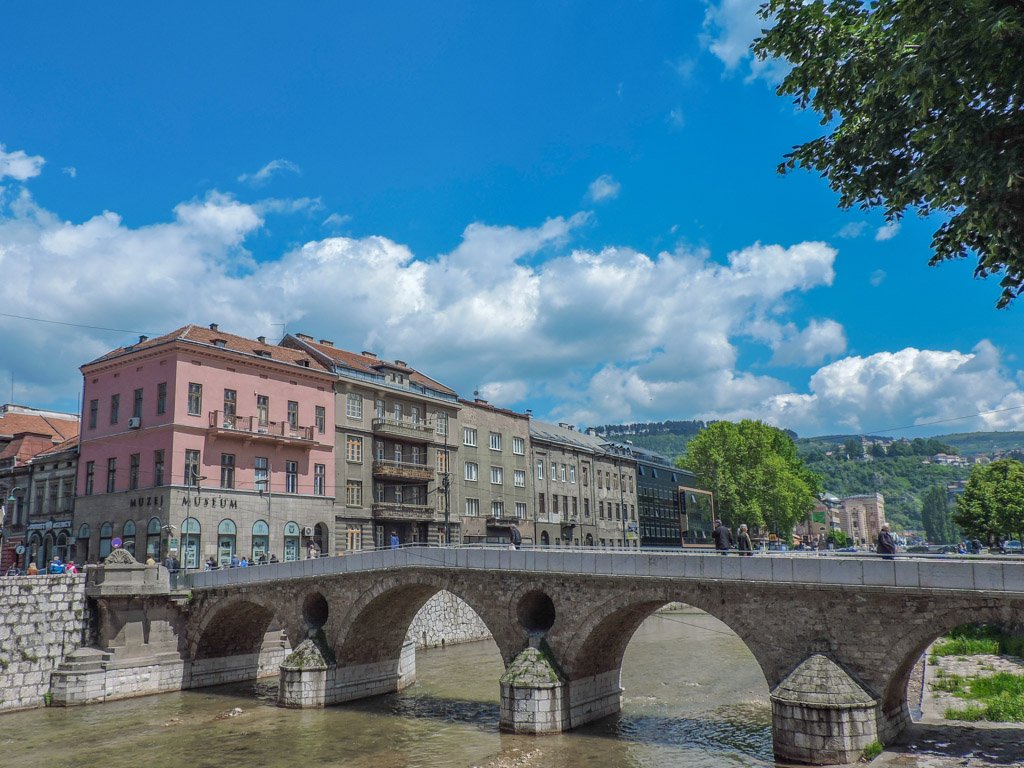 The fascinating capital of Bosnia and Herzegovina, visit Sarajevo for its tangled history, delicious food and its many things to see and do. From hiking Mount Trebevic to discovering its history in the many museums to having fun with the locals, Sarajevo can make your trip unforgettable.

**Guest post by Gemma and Craig from Two Scots Abroad

There are so many reasons to visit Sarajevo regardless of Bosnia and Herzegovina not being a ‘normal’ holiday destination for many visiting Europe. This works in your favour as crowds are limited so you can have the city of Sarajevo to yourself, almost, and since there are so many things to do in Sarajevo you’ll want that space to move about freely and speedily.

1. Sarajevo is where WWI started!

On the 28th of June 1914, the course that the world was taking changed tracks and it all began with a visit to Sarajevo by the Archduke of Austria-Este, Franz Ferdinand, and his wife, Sophie. Unknowingly, there was a plot to kill the couple which initially was not successful (and quite comedic if what tour guides tell you is true), however, a 19-year-old man did manage to shoot the target, killing both, and this young man was Gavrilo Princip. The killing took place on the corner of Sarajevo’s Latin Bridge which still stands today.

Fast forward to the 90s and Sarajevo is facing its own conflict. The city is surrounded by soldiers shooting down and in from the mountains. The Sarajevo Siege took place from ‘92-’95 and saw over half of the buildings destroyed and over 5000 civilian killed. You can see where people died as a red splatter of paint sits at each spot, this is called the ‘Sarajevo Rose’.

Sarajevo has several viewing points which provide stunning views of the city. Take an easy walk up to The Yellow Fort, not forgetting your takeaway beer or the lift to the 35th floor of the Avaz Tower and buy a coffee. Best viewed at dusk for the sunset.

4. Sarajevo is for hikers

My top secret for Sarajevo’s best views is to hike up Mount Trebević, it’s quite a challenge but definitely worth it. The hike consists of walking through the housing so you get to see locals going about their daily lives then it takes you past two abandoned houses with bullet holes and graffiti (the familiar cat that you will see elsewhere in Sarajevo). If you do not want to trek you can take a taxi or catch a local bus for part of the way.

5. Sarajevo has an abandoned bobsled track!

This is so bizarre but at the top of Mount Trebević, there is an abandoned bobsled track. The track was used during the 1984 Winter Olympics when the world famous Torvill and Dean took to the ice. While they were spinning on skates, the bobsled teams were up in the mountain, sliding down the curves of the track at high speed. Later in life, the bobsled track was used by the Bosnian Serbs to fire into the city, or so the story goes. Today the track is home to those who like art. There are hundreds of tags all over the track from start to bottom. A trip to the track is well worth a visit, it’s complicated to get to but here are detailed instructions on how to get to Sarajevo’s bobsled track.

Sarajevans are known for their dark humour. Our tour guide suggested that people thought it was down to surviving the Siege but she argues that they’ve always had a sick sense of humour. She told us that during the Siege you would still see women dolled up with their hair in place, lipstick done and wearing heels, whilst running from shells to get clean water and food rations. I highly recommend taking a ‘free’ walking tour in Sarajevo to meet some locals and hear their stories.

One of the local dishes is called Cevapi. Cevapi is stupidly cheap at around £3. The meals consist of a naan style bread which is filled with small sausages and a dollop of sour cream (yum!) and fried onions. Some of the best Cevapi is sold in the Old Town which is also an interesting place to wander around, avoiding the pigeons.

Burek is another national dish but this time it is pastry rolled out and stuffed with meat or vegetables. Again, this is economical at £2. Sarajevans also love their coffee (and cigarettes) however it may not suit all tastes as it is quite bitter.

Sarajevo is pretty much is a walking museum with obvious bullet holes, a couple of buildings which have not been restored (most have) and those unmissable Sarajevo Roses, however, there is more to see in Sarajevo. Just outside of the city is the ‘Tunnel of Hope’ which is where soldiers carried artillery and the UN provided aid from the ‘safe zone’ airport to the city. Part of the tunnel still stands today and is best viewed as a part of a tour. Srebrenica Gallery 11/07/95 is also highly recommended. Here two screens show different stories. The first displays footage from the horrific mass genocide of Muslim men at Srebrenica in Bosnia and Herzegovina. The second follows young people in Sarajevo during the Siege and documents how they deal with the conflict.

10. Sarajevo is close to Mostar

And no one should visit Bosnia and Herzegovina without seeing the Stari Most (Old Bridge) of Mostar. This bridge overlooks the Neretva River and locals are paid to scale the bridge and dive into the water whilst tourists look on. The town itself is very pretty with cobbled streets. However the secret is out, Mostar is very busy during summer times with crowds arriving from Croatia and Montenegro as well as Sarajevo. Find out how to make the most of Mostar with our travel guide.

Sarajevo is a safe city, the locals are warm and funny, the scars of the recent conflict are evident which back up the stories told. Not only this but the viewpoints are spectacular and the food is cheap, what more reasons could you want for visiting this city?

Author Bio: Gemma and Craig, full-time workers with a life-long travel habit. Flirting with 30 and let loose on the world! Check in at Two Scots Abroad for travel tips, quips, and pics that please. Go on, MAKE TRAVEL HAPPEN.