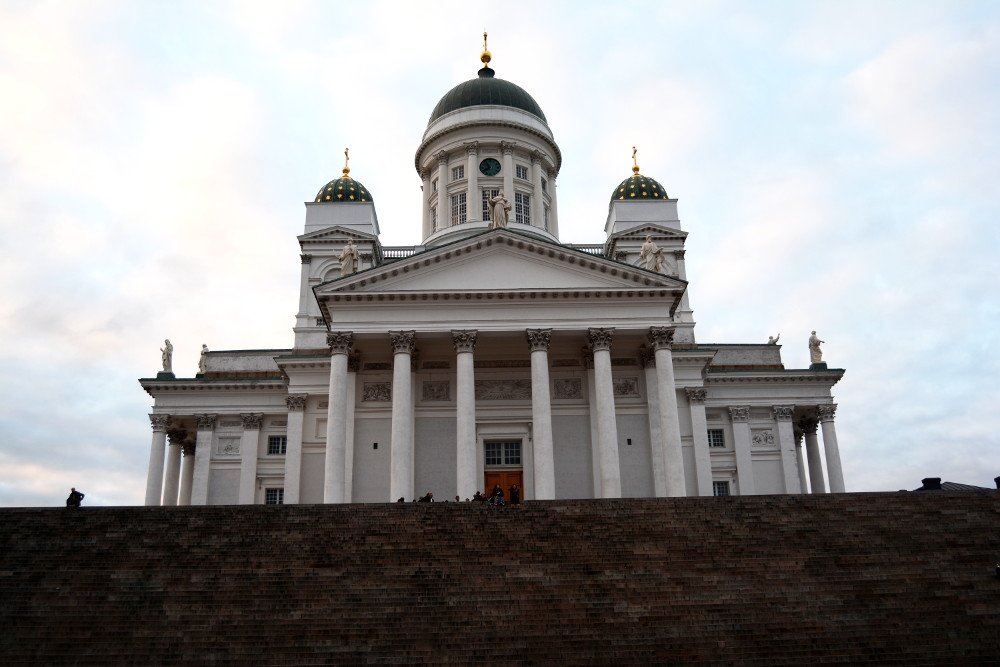 A silent and immersive nature, a delicious cuisine, and a long history are only some of the reasons why you should visit Helsinki. Read on and fall in love with Finland’s exciting capital.

Dominating about two-thirds of the Baltic Sea with a cluster of 315 islands covering one-third of the area, Helsinki clinches to the bottom of the heart of every traveler with its serene atmosphere and concealed destinations, making it vivid enough to stand out from its European cousins.

From having a great spot to witness the northern lights to holding the largest water and forest than any European country, from enjoying the “Every man’s right” by having the freedom to stroll and breathe with nature to spicing up your travel with the delectable Finnish cuisine, and from delighting yourself with the numerous sauna offers to shaking your worries away as the country is known to be one of the safest in the world- every inch of the country, especially Helsinki, is worth exploring and will surely satisfy your inner fernweh.

As exultant as it seems, Helsinki houses more than what it is commonly known for. This vast city lying at the center of Finland is being called the “Daughter of the Baltic”- mainly because of its strategic location and creatively, it’s because of what’s beyond Helsinki that makes it incomparable to any other destination.

Still on the fence whether to add Helsinki or not on your wander list? Convince yourself and start planning your staycation with our top 10 reasons on why you should visit Helsinki!

Originally built as a bastion of Sweden’s kingdom from the Russian Empire, the vibrant history of Suomenlinna Sea Fortress dates back in the mid-1700 where it was named Viapori in Finnish or Sveaborg in Swedish.

Back in 1952, Suomenlinna reached its peak, housing a total of 1,649 inhabitants. Now, it has transformed as a constituent of Finland’s culture and identity, having 850 inhabitants living in the district. Being an attraction that is situated on the islands of Helsinki, stepping on the stones of this three-century-old fortress will bring you to the sight of museums, submarines, barracks, and a stunning view of the sea- not to mention that the place itself is a recognized UNESCO World Heritage Site.

From the Suomenlinna Museum, Ehrensvärd Museum, Suomenlinna Toy Museum, Submarine Vesikko, and Military Museum’s Manege- strolling around the site will give you a blended taste of Finland’s past and modern times. While the place has become an attraction and a residential area at the same time, it’s still protected by Finland’s law, in order to preserve its attributes from different eras.

What started off as a local initiative back in 2005 to build a fusion for the business creatives within the district, has transformed into one of the most sought-for destinations in Finland- the Helsinki’s design district.

Encompassing a cosmic area with 25 streets, the district is an urban hub with 200 destination spots etched on the map- from owning trendy, stylish, and lavish fashion stores, antique shops, art galleries, and jewelry shops to bringing mouthwatering flavors of Finland through its restaurants and a serene staycation with its hotels that are filled with opulence and sophisticated designs. The design district itself stands by its name when it grabbed the title of “Design Capital of the World” back in 2012, stealing the title from Seoul, South Korea.

Strolling in Helsinki’s design district could be done in many ways- one easy way is by getting a guide on your walking tour as you meander within the district’s hub. Or if you prefer to be solivagant, consider checking the district map (for walking routes) to guide you in your travel.

When you look at the map or Finland itself, you can easily discover the intimate relationship that the country has with nature. Compared to any other cities that boast with their high-rise buildings and metropolises, Finland is simply attractive with its large forests and thousands of lakes. With the one-of-a-kind nature that it holds, enjoying a day trip to nature, specifically hiking in the Nuuksio National Park, should not be missed.

By simply taking a train from Helsinki to Espoo, you’ll reach the forty-three small lakes, birch trees, and conifers that are clustered within Nuuksio. Getting to the place and devouring its beauty is like treating yourself in the splendor of tranquility that Finland has- in an easy way, for a fair price.

Be sure to pick your best hiking shoes and complete wanderlust backpack to get the most out of your hike at Nuuksio National Park- and if you’re lucky, you might even meet some of Finland’s finicky, little friends such as deer, elk, foxes, and of course- squirrels!

4. Enjoy its laid-back and chill lifestyle

With the whole city decorated with the grandeurs of creativity, although subtly implemented, it’s no secret that Helsinki enjoys a laid-back and chill lifestyle. From aesthetic cafes to lively nightclubs, the city offers a haven of relaxation that will quench every traveler’s thirst for some dynamic vibes.

Take its Kallio neighborhood as an example! As the peace and silence take over the large forests and seas, Helsinki glistens up with a vibrant nightlife and a hideaway for hipsters which also welcome musicians, artisans, workers, students, and travelers- like you!

And if you’re looking for a place that is full of energy, join the party at Kuudes Linja, Kaiku, and Navy Jerry’s- just to name a few places where everyone chill-out while they rock on the dance floor. They even offer scrumptious foods and cocktails to complete your hang-out.

5. A chance to see Porvoo

When it comes to history, delicacies, and wooden houses splattered with a palette of colors, Porvoo beguiles every travel junkie’s desire. With its prominent shore houses painted in red, originally built in honor of Sweden’s King, Gustav III, the place remains as a top destination in Finland and one of the city’s main attractions and symbol as it embodies the attributes of a European country through the vivid colors of the houses and other structures exalt. Aside from the appealing houses, Old Porvoo is also a headquarter of stunning cafes, shops, museums, and restaurants.

Although Porvoo is not actually located anywhere inside Helsinki, its proximity of just about 50 kilometers from the heart of Finland’s capital gives it a leverage among any other destinations in Finland.

Click here to book a trip to Porvoo from Helsinki.

Heat up your travel and experience the public sauna in Helsinki!

In other places, a sauna might be just a place where you can take a break, after an exhausting day or if you simply want to take a break. But in Helsinki, a sauna experience is quite different, yet extravagant- there is a limitless possibility of entering a public sauna since the activity itself is already etched and marked its essence to the Finnish culture.

If you want to feel like a real local and get the most out of your Finland travel, then treat yourself to Helsinki’s public sauna, the local way. Picking a great place for some heat is never a problem in Helsinki, the city has tons of public saunas to offer to locals and tourists alike- the oldest one was even built back in 1928!

Aside from the northern lights, thousands of lakes, and red wooden shore houses, what Finland has in store aren’t limited to those that you can see with your naked eye- sometimes, the best way to a traveler’s heart is through its stomach! Yup, it also applies to those people who fell in love with traveling. As the luscious Finnish cuisine moves its way through your tummy, it passes and pierces through the heart of every foodie.

And where can you get the best of the Finnish cuisines? None other than the capital of the country- Helsinki. Here, you can literally spice up your travel with Finland’s flavors. Try out some of Finland’s finest delicacies- karjalanpiirakka or also known as Karelian pies and grillimakkara which are large sausages that are grilled, with mustard to savor the dish.

They say that your ticket to understanding the city you’re traveling is by hopping on its transport systems! While Helsinki is a city that you can meander on with your bare legs, they have several transport systems to accompany you when your feet start to tire off or if you’re running late. Take their metro, trams, buses, commuter rail, or even the ferry if you want to bridge destinations like Suomenlinna- all for a stress-free way of getting around the city!
Quick tip: Be sure to buy the right ticket for your travel! Even though the tickets aren’t really restricted to a certain transport system (except for trams), there are several types of tickets including single day tickets, a travel card, and on top of that, there are two “rings” after Helsinki that also have different price points – Espoo and Vantaa are not part of Helsinki!

Fall into the hidden charm of Helsinki as the peace and silence sit with the people and blends with the atmosphere of the city. With Finland harboring large forests and countless lakes, Helsinki’s propinquity to these destinations brings each traveler the calm and sought-for peacetime.

To experience this, do it that Finn’s way! Consider renting a cabin- either near a lake or just within a forest, and for a more Finnish vibe, get naked and rejuvenate yourself in their saunas! Or if you want to explore the peace with your feet, try hiking in Nuuksio Park, which is just minutes away from Helsinki.

Have you ever heard of the nickname “midnight sun”? Well, you’ve come to the right place! Although the exact term only refers to places on the north or south of the Arctic Circle, in Helsinki, we witness the sun for a straight 24 hours in summer. Witnessing the nature and discovering outdoor activities is what fascinates the locals and travelers whenever this phenomenon occurs.

While the Finns experience literally dark days during winter, summer shines every Finn’s heart, transforming public areas to lively places, which is almost never-ending every summer. By resting in a cottage or enjoying day trip adventures such as hiking, fishing, and canoeing, is the epitome of how the Finns spend their summer.

Need more travel inspiration? Check out these other great destinations!

10 reasons why you should want to travel to Iran now

10 reasons why you will fall in love with Cuba