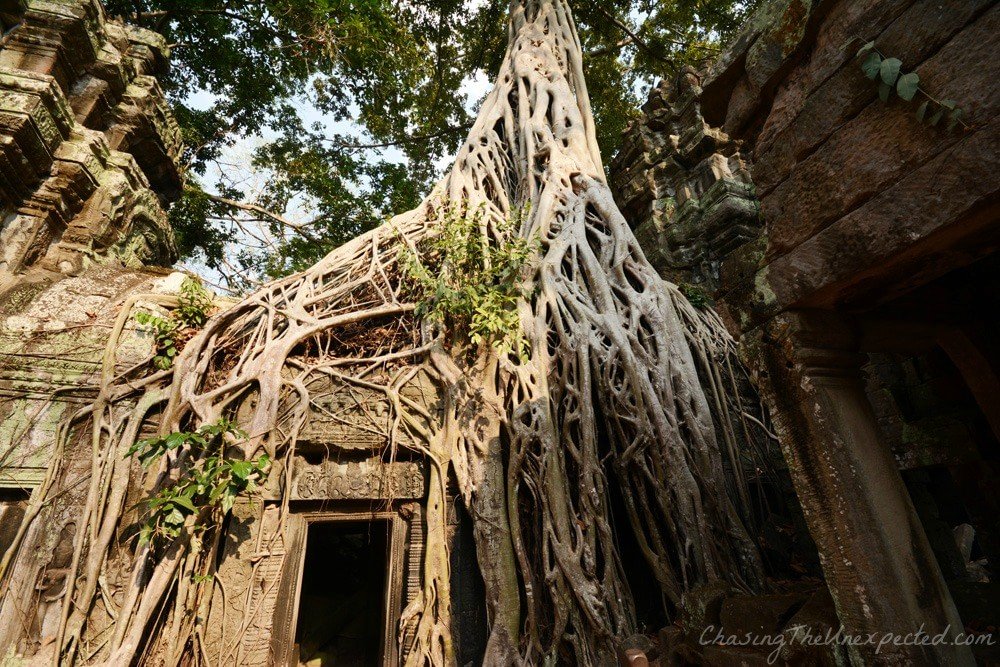 Whether it’s a historical or a living temple, in Cambodia, spirituality seems untethered to time. Probably like anyone traveling to Siem Reap, and most people traveling to Cambodia in general, my first experience has been a two-day all-temples-tour, a full immersion in the Angkor Wat archaeological park, with Angkor Wat itself left on the second day to be admired from the sunrise.

One of the things to do in Siem Reap is visiting Archaeological sites nearby and one of them is Angkor Wat archaeological park with many temples, it goes without saying that the temples are historical monuments, even though many Cambodians organize their lifetime trip here for both a visit and to have the chance to pray, adding to the spiritual atmosphere of the area and showing the great respect the Khmer population has towards their history, somehow still alive and part of their existence.

[su_note note_color=”#fddbf0″]The Angkor complex is huge and takes days to visit all the temples. Check out the 4-day adventure tour tailored by G Adventures to explore this beautiful UNESCO-listed sacred site with an expert local guide.
Click here for more details on booking availability and current prices and offers.[/su_note]

Journeying along the myriad of temples part of the Angkor Wat complex it’s possible to track the history of the Khmer empire, mainly through its myths, legends, and folktales, different for each temple but all of them connected. As history goes, it all started around the IX century, during the reign of a young Jayavarman II. He established the first capital of his kingdom near what’s now the town of Rolous, where I visited its local market. Little by little, conquest after conquest, this became one of the most powerful and greatest empires in all of Southeast Asia.

A captivating interplay of Hinduist and Buddhist features, inscriptions, carvings of tales of battles, princes and princesses, heartbreaking love stories, snakes, oceans and how Kambuja (Cambodia’s ancient name) was created populate the walls of these historical temples, in a sort of chronicle of a great bygone era.

READ MORE: Do you like nature, adventure and experiencing local life? Check out our tips on how to go trekking in Cambodia and why you should!

From the dimensions of the temples, the fine carvings, the elaborate details and the elegance of their figures, everything in the Angkor Wat archaeological park reeks of majesty and power.

At Angkor Wat temples many areas are devoted to Hindu gods Shiva and Vishnu, especially Shiva, the “Universe destroyer” because he was considered the first protector of the empire. Many are the features that you’ll see recurring in the different temples, with the most common being the stupa, structures containing mainly ashes of Buddhist monks, and linga, or better, where the linga was located before being stolen/removed. The linga is a phallic-shaped stone often representing god Shiva and usually placed in the middle of a square slab called yoni, a sort of womb, to symbolize fertility and prosperity.

All temples are beautiful and worth a visit, but if you don’t have much time, I would suggest you don’t miss Angkor Wat to have a clear idea of the majesty you’re in for, then move to the stunning Banteay Samre and Banteay Srei for the finest and most intricate carvings and decorations depicting the eternal struggle between good and evil and the inevitable victory of the former, and by all means do head to the gorgeous Bayon and Ta Prohm.

Bayon, built in what has gone down in history as Bayon style, the last great construction style, will blow your mind for the huge faces carved on the towers. Considered less elegant and elaborate than Banteay Srei and Angkor Wat styles, Bayon temple is all about dimensions, magnitude, and greatness.

⇒ Tip: To enhance your Siem Reap trip, book a tour to the archaeological Angkor Temples complex or visit Angkor Wat at sunrise.

Of the same Bayon style, Ta Prohm, also known as Jungle Temple, will bring you back to Tomb Raider. It’s here, in fact, that Lara Croft did her stunts and the movie was shot. Utterly beguiling, this temple struck me for how much it shows that no matter what, Nature always takes over.

Tourism in Cambodia is fast increasing, and while the temples around Siem Reap are bound to be pretty much always popular among travelers, there certainly are other cities worth a stop, such as Battambang, about which I’ll be soon publishing a post, and areas such as Kampong Chhnang to have a taste of more traditional lifestyle where poverty is still the main feature.

Like in many developing countries, when tourism starts developing, there is always the danger of irresponsible behaviors. This, unfortunately, is becoming a problem also in Cambodia. When I was in Siem Reap I’ve had the chance to meet the director of a local Ngo who opened my eyes on this sensitive issue, and this will be the subject of one of my future posts about this beautiful country. For now, enjoy and revel in the images of Angkor Wat stunning sacred places.

Angkor Wat is the largest religious monument in the whole world. Initially built as a Hindu temple of God Vishnu but gradually it was transformed into Buddhist temples.

*****Metta Residence & Spa
This hotel in Siem Reap is only a few kilometers from Angkor Wat with excellent facilities such as restaurant, bar, and lovely pool. They usually offer complimentary dinner and massage and in many cases, they exceed the expectation of the guests. Click here to see the latest prices for Metta Residence near Angkor Wat

****The Cyclo d’Angkor Boutique Hotel
It is an excellent choice with unbeatable prices, an ideal place for visiting Angkor Wat and other attractions in Siem Reap. The city center is easily accessible by Tuk Tuks waiting right outside of the hotel. The Hotel facilities are good, especially the bar and swimming pool at the rooftop with a good view, they also have free airport pick up. Click here to see more information about Boutique hotel near Angkor Wat

Whether you are travelling to Siem Reap, Battambang or Phnom Penh, Cambodia is a lively country with plenty of things to see and do.