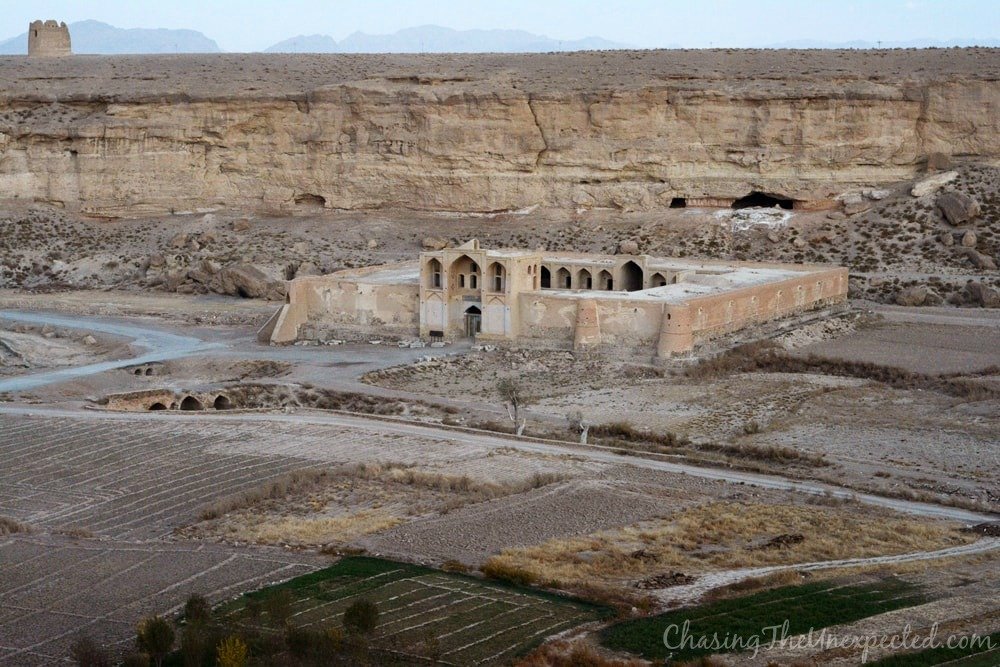 There is a place in Iran that, in my opinion, is not capturing the attention it should. Nestled in the very heart of Persia’s segment of the ancient Silk Road, Izadkhast caravanserai is worth stopping, visiting and photographing at any time of the day, with the highlights being early morning and just before sunset.

Located in Fars province on the Isfahan-Shiraz highway at about 135 km from Isfahan, Izadkhast Complex has been submitted to UNESCO tentative list in 2007 as an important station of the storied Silk Road trade route and comprises of a castle fortress, a caravanserai, and a Safavid-era bridge. Mixed in architectural styles and steeped in history and adventurous tales, Izadkhast complex is utterly fascinating and able to whirl you back in the Asian middle ages when Persia lived its cultural heyday under the Safavid reign.

The Persian leg of the silk trade route didn’t involve only Iran, but also other Central Asian countries former parts of the Persian Empire, such as what today is Afghanistan, with Herat being one of the most important stations on the Silk Road map with several caravanserais to offer traders and travellers a place to rest before resuming their often dangerous journey.

Many are the caravanserais open to the public in Iran, but the one within Izadkhast complex seemed unique.

Its appeal is actually pretty simple: in the middle of nowhere, surrounded by desert land, the view is dominated by the debris of the old citadel that is now falling apart. The old building, mostly abandoned and with random bikers darting on and off from time to time, looks tired and worn out from all the past deeds and adventures.

As soon as you arrive, you are confronted with a crumbling citadel built on a hill slope from where you can see the caravanserai standing alone in the middle of a rocky field and with a barren plateau behind. While the citadel, in all its alleys, arches and doors, shows architectural features from different periods, from the Sassanid to the Qajar dynasty, the caravanserai of the Izadkhast complex is a jewel of the Safavid era.

Inside, the caravanserai is a fascinating sequence of arched doors, presumably the different areas hosting merchants, traders and their caravans. Forerunners of our guesthouses, caravanserais were not only a place to lay down, have a warm meal and gather the energies to carry on in their hazardous journey, but also crucial hubs where travelers didn’t waste the opportunity to do business with local markets and traders, and cultural crossroads where merchants didn’t just exchange textiles and spices but also ideas, traditions, languages, and even news, both importing their own and taking back home what they had learned along the way.

Apparently, one of the earliest examples of caravanserai was built in the Syrian oasis city of Palmyra, today theater of countless tragedies due to criminal ISIS occupation, but in its origins a vital stop for the travelers and merchants crossing the Syrian desert. Later many caravanserais sprung up all along the different Silk Roads at about 40 km from each other, and centuries of cultural fervor populated the regions involved in the exchanges from China to Europe.

While it’s largely proved the important role of caravanserais in the trade of all types of goods, probably the most valuable legacy that arrived up to us is the great opportunities they offered to share and exchange ideas, cultures, religions, philosophy, literature and even personal experiences.

Sadly, today many of the most beautiful caravanserais are in war-torn areas, from Syria to Afghanistan to Iraq, and this is probably why whenever I will go back to Iran I will try to visit as many as possible. After Izadkhast caravanserai, I will make sure to trace the Silk Road history and route through other stops such as Qazvin not far from Tehran, ancient capital of Iran before Shah Abbas transferred all the beauty to Esfahan, and who knows, maybe one day up to Nepal, after new research has suggested that the fabled Silk Roads probably led further south than previously thought.

Places to visit in Iran in 10 days, the ultimate guide

18 things to know before you travel to Iran

Iran souvenirs, the definitive guide to shopping in Iran

3 thoughts on “Caravanserai as cultural crossroads along the Silk Roads: Iran’s Izadkhast”