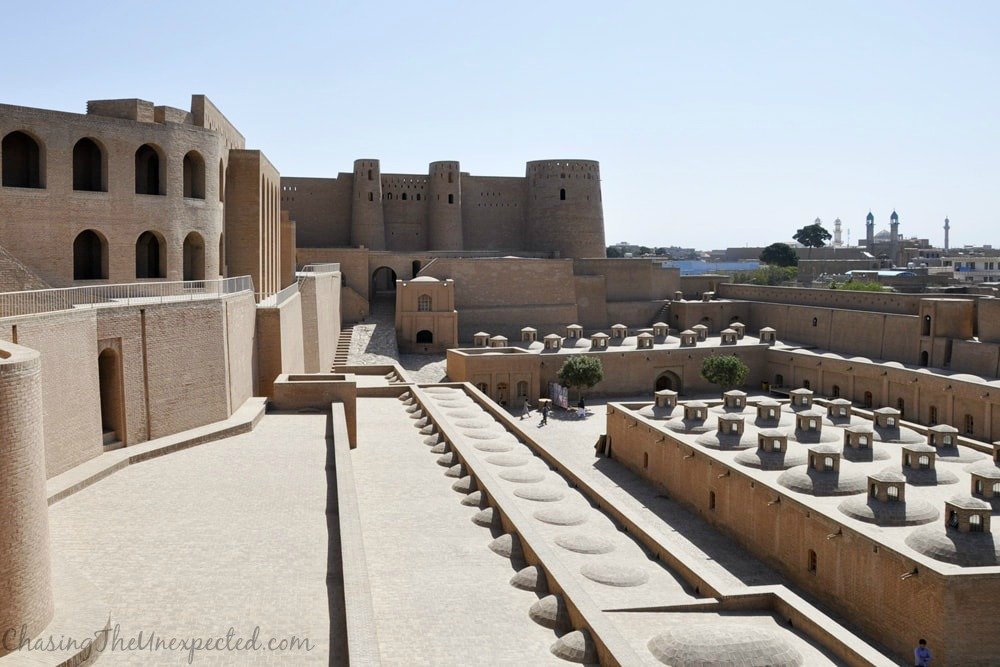 According to 2016 Global Peace Index by the Institute for Economics and Peace, the state of security in Afghanistan has gone from second to fourth worst in the world. While this may sound positive, there’s not really much to cheer about. The GPI has shown that the world as a whole has become a less safe and peaceful place, and this is why we can’t talk about a real improvement in the state of security in Afghanistan, as much as a worrisome escalation in other countries.

In August 4th a group of foreign tourists was ambushed by Taliban militants in Ghor Province on their way from Bamiyan to Herat. Even though attacks specifically against tourists are rare (tourists themselves are rare, that is), attacks with high numbers of civilian casualties have been several during the last years. What’s more alarming is that this trend is on the rise.

Please allow me to be a bit frank here. I don’t know where the tourists ambushed by Taliban were with, nor what itinerary they were following, but if any foreign tourist wants to travel to Afghanistan, they need to know where they can and cannot go, alongside being aware of what type of transport and route they can take. Ghor Province is a Taliban-controlled area, and since extra-urban roads are always dangerous as often militants from different groups, foreign tourists more than anyone else should avoid them.

The real state of security in Afghanistan

Has security in Afghanistan improved? Yes and no. Until last year, the situation was slightly improving, but in the last months Afghanistan has witnessed a surge in terror attacks, especially in the capital, Kabul, by both Taliban (mainly against the national government and foreign troops) and ISIS, on a worrisome rise in Afghanistan (usually against the people, just like they have been doing in Syria).

This takes to next point. The ISIS project, mainly created to destabilize Afghanistan and its neighboring countries to eventually sneak in bordering Russia and China, hasn’t met the favors of the Taliban commanders, who have been fighting them along the way until now. ISIS even offered Taliban to join them and Taliban have refused and fought them into leaving every area they set foot in.

Being Russia and China (and Iran) the main target of the ISIS project, now the conflict in Afghanistan is moving northward in provinces such as Badakhshan, Kunduz, Faryab, Balkh (poet Rumi’s birthplace!). However, Helmand province, even though in the south, is being increasingly controlled by the Taliban, not so much the main city but surrounding districts. Kandahar too, although fully under government control, counts a high number of Taliban and Taliban sympathizers.

If you want to travel to Afghanistan: safety tips

Recently, even though the dangers are evident and governments discourage their citizens to travel there, Afghanistan has been drawing much interest and many travelers would like to visit. The breathtaking landscapes of Bamiyan and Hindu Kush-framed Panjshir Valley, the culture of Mazar-e Sharif, traveling along the Silk Road through the caravanserais of historical Herat City, but most of all the curiosity to visit Afghanistan itself, a country that has endured some forty years of uninterrupted conflict and terrorist activity. This and more is what’s attracting tourists to Afghanistan.

But what are the things to keep in mind if you are thinking about heading there?

First of all, foreigners need to take some good security measures, either by hiring a private company or coordinating your trip with governmental agencies that will provide safety for you.

When I was traveling to Afghanistan with my (Afghan) husband, he rarely spoke English with me in public, even though I didn’t understand Persian. We had the agreement that I would just stay silent and nod, or at the most, I would say the couple of words I knew.

We would also avoid areas known for hosting Taliban sympathizers, very conservative places or towns where foreigners are seldom seen. I have been confused for an Afghan/Iranian quite often, but unlike in Iran, many people in Afghanistan could spot I wasn’t a local, even if I wasn’t talking.

I always wore the same clothes Afghan women were wearing, in Herat the chador, extremely uncomfortable especially when I wanted to take pictures and I had to hold it instead to prevent it from slipping off my head. Probably my clumsiness was a sign that I wasn’t authentic.

The hardship of Afghanistan tourism industry

Afghanistan tourism is obviously suffering from this ongoing war and terrorism situation, and the related tourism industry is on its very inception despite the country boasting a long history and rich culture. While I suggest you don’t travel to Afghanistan at the moment as the situation is quickly escalating and no one can predict what will happen next, here are some tips from an expert in the field of security. If they don’t want to wait for a better future, travelers need to follow all measures to ensure their safety in Afghanistan. We don’t want to scare anyone away, but it’s always better to be safe than sorry.

Travelers should have as much information as possible before embarking on a trip to Afghanistan that’s all but easy.

Afghanistan has been at war continuously for the past four decades, it’s easy to understand that there is a high level of poverty, and this is why foreigners should pay attention not only to the places they go but also the times. In fact, security issues are not only related to insurgents but also petty criminals who kidnap for a ransom, just like the two professors of the American University in Afghanistan who were abducted recently in Kabul. Try not to get out of your hotel every day at the same time; tell your driver, if you have one, to take different routes; don’t feel too confident going out late in the evening, if it’s safe for Afghans, it might not be as safe for foreigners.

Rule #2: Try to blend with locals as much as you can

While it might not be as straightforward due to the language (in Afghanistan they speak Persian Dari and Pashto), if you are in crowded areas such as local markets or busy streets, you can at least dress like an Afghan, both men, and women. Typical Afghan clothes for men consist of loose trousers and a long tunic on top, while Afghan women pretty much follow the same dress code of Iranian women. While the headscarf in Afghanistan is not mandatory by law, women wear it, so if you don’t, you are likely to stand out in the crowd.

In big cities most places are safe, especially in busy hours, so avoid early mornings and late evenings. Be sure to avoid places such as public protests and demonstrations, government buildings where people are lined up waiting for services like passport, national ID or any other paper; stay clear of any military convoy you might see, both Afghan and foreigner; avoid isolated areas, try to be always where many people are; pick your hotel always in the central areas of the city; anywhere you want to go, ask your hotel to book a taxi for you instead of getting a random car from the street: drivers will see you are a foreigner and will extra-charge you, possibly getting nasty if you refuse to pay.

A word about the geography of security in Afghanistan and the cities and provinces where it’s safer to travel right now. By all means visit Kabul, yet keeping in mind all the recommendations above; Mazar-e Sharif city at the moment is still very safe even though in the north of the country; Herat on the border with Iran is fascinating and pretty safe; Bamiyan, the city and also some places around the province, better with local tour guides. As a general rule, avoid remote rural areas, if you are with a trusted local guide, they will know where to take you.

It’s always good to show that you master some Persian (Farsi/Dari), so you will look and feel more confident yourself, along with the fact that Afghans hardly speak any English. Learning daily sentences about directions, shopping, prices, numbers, and greetings are a good start and won’t make you look too lost and vulnerable. Just a little precaution that can improve your security in Afghanistan.

Rule #5: It’s better to rely on a local guide

Both for issues related to security in Afghanistan and lack of infrastructure, your best bet is to rely on trusted local guides. For example, if you get lost, you won’t find places on Google map as easily as in other countries, so, as I mentioned earlier, guides will take you to the right places. Likely, travel agencies in your country will work with local Afghan agencies, so those should be the safest choice. If you are thinking about traveling to Afghanistan and don’t know where to start, contact us and we will put you in touch with a reliable local tourism agency.

Rule #6: Do your research

Look carefully into all the information you can get access to, about the places to visit in Afghanistan, the areas where foreigners are more at risk, the provinces still under Taliban control and those where now ISIS is active. Check the Afghanistan travel advice your embassy has issued, the guidance and the security recommendations they published on their website. As mentioned above, you better rely on a local because he knows where to take you, but you also need to make sure that the local is really trustworthy! On government sites, you might also find trusted tour companies.

Afghanistan is a unique and fascinating country steeped in history and traditions. For obvious reasons, it’s not on the radar of mass tourism, but this doesn’t make it any less worth visiting than the most popular destinations. Being mostly isolated and counting little foreigners, if not for the military, volunteering or working reasons, it goes without saying that wherever you go in Afghanistan, you are bound to experience the most untouched and traditional way of living that now is rare in most countries with a bit of tourism. If you are careful about safety measures and travel with a trusted tour company, there are high chances this will be one of the most memorable trips you’ll ever take.

Travel to Afghanistan, the definitive guide to enjoy your trip

Things to do in Herat, Afghanistan

2 thoughts on “The real state of security in Afghanistan, tips to travel safe”