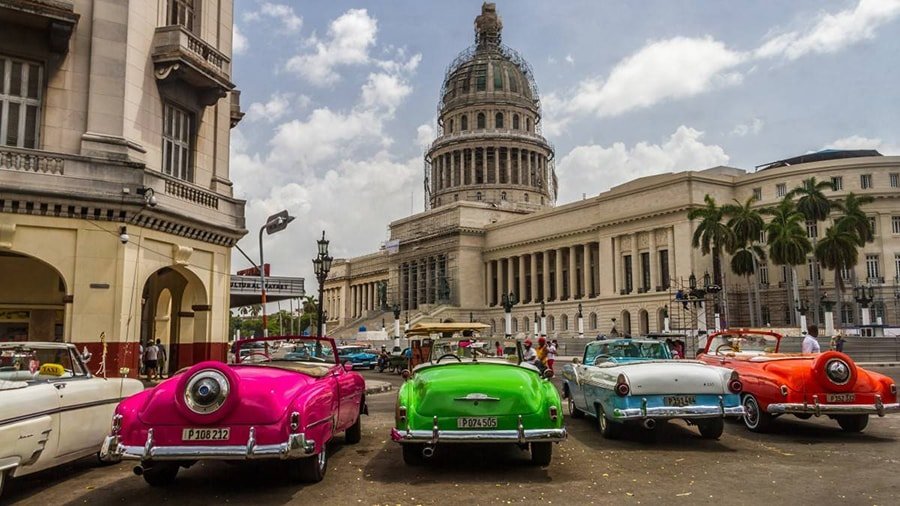 Untouched by tourists, authentic and with a fascinating history that is being made day by day, if you want to travel to Cuba, do it now before it’s too late and everything will be different. One of the favorite destinations in many of the best tours to Central America, Cuba has it all: pristine beaches, laid-back vibe, hearty food, and cigars!

While still not exactly a tourist-trodden destination, in the last few years more and more visitors have been flocking to Cuba. The laws for American citizens visiting the country have started to relax, and internationally it is still known as an authentic place to visit with a unique culture. Visiting Cuba is an experience like no other, and here’s why…

One of the things that Cuba is most famous for is that within the country, it still seems like the 1950s. Cuban cars are retro vehicles and the streets are lined with colourful buildings. There’s little technology (and what there is cannot be relied on to work). In the gorgeous capital of Cuba, Havana, locals will sit around on roadsides every night, playing cards and smoking cigars. There are scenes in Havana that you’d never find in any other city; and within this Caribbean island, the community atmosphere and slower pace of life are still very much alive. This vibe is what makes you want to travel to Cuba.

Because of Cuba’s distinct lack of tourism, it has some of the most untouched and picturesque dive sites in the world. Because Cuba is at a natural meeting point of the Atlantic Ocean and Caribbean Sea, it contains a variety of marine life not prevalent in other dive sites. Some popular spots include Jardines de la Reina; which boasts untouched coral and large sharks, and Cayo Largo, which is a popular ray and barracuda hangout spot. Whatever your favourite marine wildlife is, you’ll have a good chance of spotting it in Cuba!

Cuba is slowly opening up to Americans, but the restrictions on Americans and its distance from other parts of the world mean that it remains very non-tourist trodden. The result? A history you won’t see anywhere else, an intriguing culture and a truly authentic cultural experience. Cuba’s main charm lies in the fact that there are very few resorts and businesses catered for tourists. What you see is what you get with Cuba!

Cuba might not officially be the birthplace of Air BnB, but the idea of staying in a family’s house as a paying guest has certainly been around in the Caribbean country for a long time. Casas Particulars are so widespread in Cuba that they are a fantastic reason to visit; without too much initiative on your part, you’ll almost definitely end up staying with a local family while you’re there.

Guests at Casas Particulars stay in their own room but share the living spaces of their families. They’re often expected to socialise with the families, which gives a lot of travellers to Cuba a rich cultural experience that isn’t so easy to come by elsewhere. Travelling in Cuba means sampling local culture at its finest – and many visitors to the island’s lives are forever enriched because of it.

If you travel to Cuba, you should know that there’s a lot of stipulation about the WiFi (or lack thereof) situation in Cuba. It’s mostly true; there is no internet in places you’d normally expect to find it, including hotels, restaurants, and bars. There are a few communal spaces where you can connect to the internet after the purchase of an access card, but apart from that, Cuba is relatively WiFi free.

While this might fill some travellers with horror, it’s actually one of the best reasons to visit Cuba. We all claim we need a ‘digital detox’, but only when visiting a country like Cuba are we forced to take one. The lack of internet in Cuba helps travellers really get to the heart of places and see the country for what it really is – not spend the holiday on Instagram. It’s the lack of WiFi that makes Cuba such an authentic travel experience.

Cuban rum is unique tasting and loved by locals and tourists alike. It’s definitely the drink of choice throughout the island – and in some places, is cheaper than a bottle of water! – Cuba excels in Cuba Libres and Mojitos and has a variety of chilled bars to sip your ice cold beverage at. A perfect cool-down after a hot day in the country!

Cuban salsa is a popular past time loved by many residents of the island, and salsa lessons are a fantastic Cuban experience to love. Even if you don’t fancy some official classes, the Caribbean and Latin blend of music will have you swaying your hips in any bar – and before long, you could find yourself cha-cha ing all over the island!

You’ll be forced to learn some language

When you travel to Cuba, keep in mind that because of its isolation from the rest of the world, English is not widely spoken. It’s a great idea to learn at least basic Spanish before going to Cuba so you can interact with the friendly locals of the country. Don’t be afraid of making mistakes; Cubans are incredibly warm and will be grateful if you make any effort to speak their language.

The cuisine of Cuba hasn’t got the best reputation, but the local restaurants, or paladares, are your best option for tasty Cuban food. They are independently owned eateries which have only been introduced in the last few years. Because they’re non-government owned, the food is a lot better and by eating at them you’re supporting the local economy.

It’s sometimes difficult to tell if a restaurant is a paladar or government-run, so ask upon entering or just look for the restaurants full of locals – Cubans who can afford to eat out always favour paladares over the old-style government diners.

A complex history… that is still being made

For all those who travel for history, Cuba is well worth visiting. Top places to visit in Cuba include nine UNESCO world heritage sites which have cultural or physical significance. From colonial Spanish architecture to visiting some of the very best communism-themed museums in the world, history buffs will have their Cuba itinerary jam-packed.

The most interesting part of Cuba’s history is that it is still being made. Especially in terms of its relation to America, Cuba is still developing and changing as a country. So, don’t wait too long and travel to Cuba, because a visit now might be completely different from a visit in two more years.