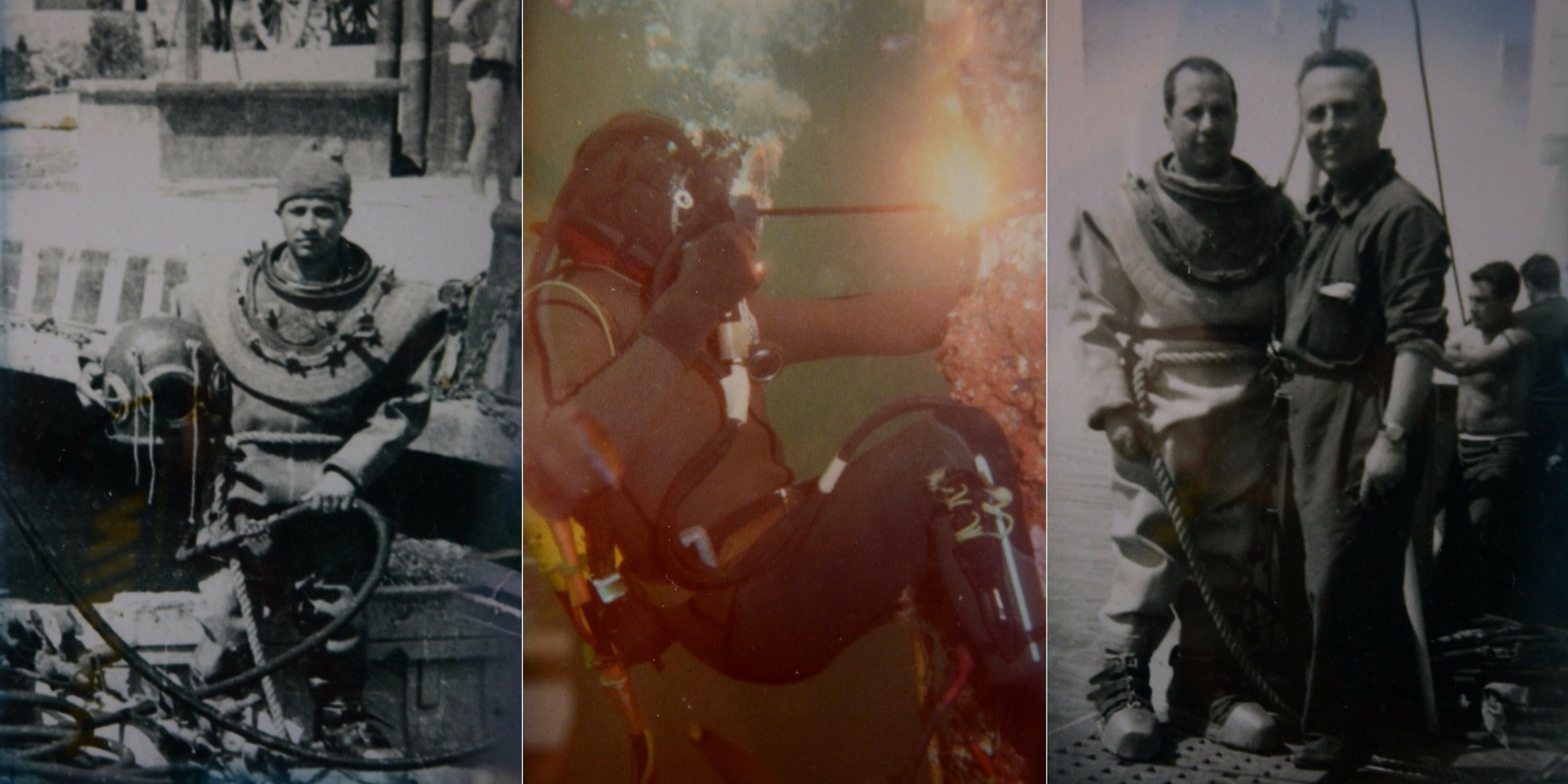 When he was accepted at the Varignano, the famous diving training school of the Italian Navy in Le Grazie along La Spezia coastline, Domenico Cubeddu couldn’t even swim. Hailing from a small mountain village in central Sardinia, in 1954, when Italy was emerging from the debris of WWII, he was dreaming to join the Navy because he wanted to leave Sardinia and travel the world. In all honesty, he never even thought about becoming a surface-supplied deep-sea diver, he just wanted to sail and travel.

As it happens, destiny had something different lined up for him.

63 years later, every time he visits the Varignano as a retired old diver, he’s saluted by his own colleagues and the young generations who still now hear about his actions and exploits.

If you think about Liguria’s coast, the first place that comes to mind is usually the Cinque Terre, Portovenere, or only accidentally the region’s capital, Genoa “The Superbe”. Hardly, however, you would think of Le Grazie, part of Portovenere and home to the Italian navy’s training base for deep-sea divers, “palombari” in Italian.

Le Grazie is a small seafaring village that very few would know if it weren’t for the Varignano, base of the Italian Navy that has been training its deep sea divers for more than 50 years. Generations of retired divers meet at the Varignano every two years for the official gathering where they recall the good old times and complain about the current state of affairs, the loss of values of the society and all other world’s problems.

In his heyday, Capo Palombaro Cubeddu, as he was defined with the Navy terminology, was an all-around player, meaning wherever the others couldn’t reach, he was sent. Due to his high-level physical performances, the Navy wanted to keep him for the free-diving championship but he always refused: “I should have stopped working and kept training for competitions, I would have led an athlete life and it just wasn’t what I wanted,” he said.

Many were his stints in the water, but probably what made him get noticed and very much remembered by still now is when he reached 56 meters free-diving during the recovery operations after a plane crash in 1969. Unlike what professional athletes do during the competitions, he dived without previous oxygen supply and without the weights to make him plunge faster. After two of his colleagues underwater couldn’t finish the job of releasing the plane because of a stuck iron cable, without breathing gas supply, he jumped from the boat, released the cable, kept diving to the bottom, informed the colleagues they could get on with their work, shook hands and went back up to the surface.

Being a “palombaro”, as they like to say the deep-sea divers themselves, is a mission, a way of life, rather than a simple job. Unlike simple divers, the “palombari” are surface-supplied divers, meaning that they are connected to the breathing gas with a diver’s umbilical from the surface. The job of this particular deep-sea diver is diverse and can range from deep-sea fixing, rescue in case of accident or recovery operations in more severe disasters such as plane crashes or sunk ships and boats.

These surface-supplied divers work with a heavy equipment: their 21-kg copper helmets, 6-kg wool inner garment, 18-kg shoes (9 kg each), the outer garment that goes from 8 to 12 kg, two lead weights from 25 to 35 kg (12.5 to 17.5 each) and in case of strong water current also a lead belt (made with slabs that can be added or removed as needed, so the weight can vary, the maximum being 20 kg), tell them apart from the other diving categories. Depending on the type of work, they also need a saturation system that decompresses them when they are coming back to the surface after the working duty.

Needless to say, more than one died either inside the helmet or the saturation bell, embolism being one of the main reasons.

In his years in the Navy, Capo Cubeddu was employed in activities such as frogman with air, oxygen and nitrogen-oxygen blend breathing apparatus, diving (40-mt depth) and deep diving (80-mt depth), operator in submarine rescue chambers, operations as part of diving teams on pressurized diving systems fed with helium-oxygen gas mix, instructor of everything to form the new personnel, operator at the experimental studies centre of the Navy.

As it happens, in every category there is someone who stands out for value, hard-work and, especially in this type of job, problem-solving skills. Capo Cubeddu stood out in problem-solving when everything else seemed hopeless.

In more than twenty years, he was engaged in rescue operations, controlled detonation of explosives left during WWII, recovery operations after plane crashes and sinking ships, often on board of the famous Italian submarine rescue ship Proteo, mainly around the Italian coast, sometimes approaching African shores.

His reputation reached well beyond the Italian borders and he was well-known in the French Navy and in the ranks of Belgium royal family, to the extent that the king sent his son Philippe, now king himself, to learn some scuba diving at the only condition that he was under the direct supervision of Capo Cubeddu.

As adventurous and exciting his time with the Navy might seem, for Domenico Cubeddu this was just the first stage of his diving career. After 23 years, in fact, he left the Navy for the private sector and somehow started the life he had dreamed of when he decided to leave Sardinia. Carrying a baggage full of precious knowledge and experience he had acquired with the Italian Navy, the following years really saw him as a forerunner of modern-day world travelers.

The Varignano is still operative, and many future divers and Italian “marines” are being trained every year, although the old generation seems to regret things are not like before, in what they call the Varignano’s heyday, when hundreds of divers were learning, practicing, trying different depths and carrying out experiments on different gas blends.

“We were a family!” I heard them say just about all day during the last gathering. “The place was alive, both Le Grazie and Portovenere were lively and crowded, now you see someone only in high season, even locals migrate.”

In a not-so-remote past, the Varignano was populated by some 2000 people working on many different tasks, most actually living inside the military complex, others either in Le Grazie or in Portovenere. The Varignano was like a small town itself, comprising of a theater, cinema, shops, even compounds for entire families. Some of the officers married and settled there for good, others were either sent to different regions or left the Navy to join private companies. Whatever their decision was, they still meet every two years to remember their youth and time there.

Some of the marines are 90 or older, and at every reunion, they remember and talk about those who couldn’t be present, either for health issues or because they passed away within the two-year gap between gatherings. Many in the area recall the past time of when the Varignano was a lively hub, even the young people who have only heard about it can describe how it was.

Now there are fewer Marines, fewer divers, less romance and less sense of family, and sometimes hearing the old memories imbued with nostalgia made me compare the area with an old actress passing over her sunset boulevard.

Capo Cubeddu is still now a world traveler. Well into his 80s he has no intention to stop hopping on and off trains, airplanes, and boats when required. Honoring the Italian Navy over the Continents by showing the highest level of expertise, he explored Oceans and Seas, flying wherever the emergency called him.

More well-traveled than most people, he’s a bottomless source of information in everything from geography to the local lifestyle of the countries he’s lived in, such as Malaysia, Borneo, Singapore, China, India in the Asian Continent, or African nations such as Egypt and Lybia, up to South American giant Brazil, where he contributed in creating the diving system of the Petrobras. But this, probably, is material for a new travel book.