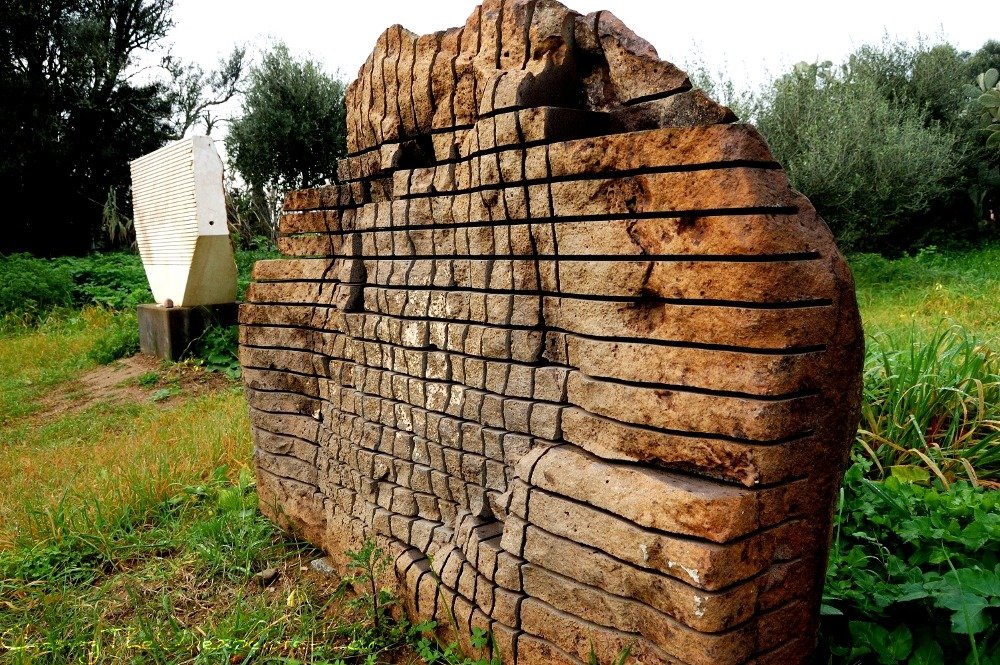 One of the best things I suggest doing in Sardinia is visiting the open-air lab-museum of the late sculptor Pinuccio Sciola. I was lucky enough to meet him and interview him.

“What is the first word that comes to your mind when you think of a stone?” Asked Pinuccio Sciola as he welcomed me to his house lab.

“What about elastic?” He suggested artfully, making one of his freshly cut stones tremble like a chord of a violin.

This is how my interview with the acclaimed sculptor who makes sound out of stones started. I immediately understood it wasn’t going to be the usual Q&A session: “I can’t answer your questions,” he revealed from the beginning, “otherwise I’ll kill all the magic that Nature has created around the stones.”

Video: Pino Sciola Sounding Stones, the Memory of the Universe

Pinuccio Sciola, as he’s known among his fellow countrymen of the colorful town of San Sperate, in southern Sardinia near Cagliari, is an all-around artist, but his soul lies in the mysterious world of stones. “Stones are the backbone of our planet,” he said. “They were here since time began, over the span of millennia, and they will never cease to exist.” I had never paid too much attention to stones, perhaps like most people, I had always taken their existence for granted.

Tip: Rent a car to travel around and explore the real Sardinia!

As Confucius already in the 6th century BC praised the importance of harmony between people and nature, today he would have been very pleased to see that Sciola has towards stones the same conception of Chinese ancient culture: they are a gift from Nature to us, and we must cherish them.

While we were making our way through the winding country lanes from the picturesque village glowing with colorful murals towards the countryside where lies his open-air museum, my efforts to find out when was the very first moment he had heard a stone’s sound proved futile.

“It has always been inside me, there is no first time,” he claimed, unconcerned about my reporting needs.

It was a misty morning, the night before it had rained, the air was still heavy with dew and the shifting sky sullen with clouds threatened more showers. “Listen,” he shushed me raising his finger to his lips. “Can you hear them whisper?”

A Rich Stone Tradition in Sardinia

As soon as we reached the swarm of sculptures, he grabbed a little rock and started rubbing it gently against a stone that stood tall among its peers in the middle of the countryside. The very moment the music started and the magic was unleashed, I was mesmerized and suddenly felt incapable of interviewing him: there was no right question and, despite my previous research, I realized I hadn’t managed to grasp his art, so the best choice was to let him talk wildly. No need to tell him, he knew it would have happened.

Sardinia, the big Italian island off Tuscany’s coast, has a long-standing mineral-related tradition. The whole territory is dotted with nuraghi, Bronze Age towers made with stones, and domus de janas, literally “fairies’ houses”, also dating back to prehistoric times. Part of Sardinian stone heritage is the so-called “giants’ tombs”, impossible to place somewhere in history, and surrounded by a mysterious atmosphere due to the presence of magnetic fields around them, to the extent that many people consider therapeutic for the soul lying underneath.

This time, I couldn’t restrain myself from asking him: “Do you think the magnetic fields around the giants’ tombs actually have such effects on men? Because geologists…”

“Ah, geologists!” He interrupted me abruptly. “If you knew how many times I’ve argued with geologists!”

I had no doubt.

Discovering the Sound of the Universe

I had always considered stones as unbending objects devoid of life, but Sciola started unfolding a whole new world in front of my eyes. “I want to establish a new relationship with nature,” he declared while we ambled about his open-air museum. “Did you know that stones bleed?”

Nothing could surprise me anymore, so I confessed immediately: “No, but please, show me.”

We were standing in front of a big grey stone, its tip covered with black. “Now this is black,” he announced, “but when I put it close to the fire, it started bleeding a fire-red liquid. A highly emotional moment.”

After a whole morning spent walking through history, sound, and mystery, hours spent listening to stones, a whole new reality unraveling in my mind, Pinuccio Sciola felt like testing me. He showed me a piece of white stone: “This is Carrara’s marble,” he announced, starting rubbing it gently with his hand. “Come closer, what can you hear?”

“Exactly,” he retorted breezily, unaware that he was making me breathe again. “This is one of the rare completely dumb stones!”

Sardinia is the land of mystery. There are hidden traditions that even many natives ignore, events beyond comprehension that even scientists gave up on occur. Pinuccio Sciola fully operates in this unconventional mix of nature and man-made reality redolent of a remote past in which men were closer than they are now to Mother Nature.

“I owe much of my inspiration to Central and Latin American countries,” he revealed during our chat. “Mexico and Peru have been crucial for my art and work.”

“Ancient civilizations such as the Maya, like the prehistoric Nuragic population in Sardinia,” he went on, “relied on nature more than we do today, and probably this is why they had a greater respect for the planet.”

While we were leaving Sciola’s otherworldly stone museum, a flood of questions crossed my mind. But I barely managed to gather the little pieces of information he gave me all throughout the day in order to grasp his art, fully embedded in his seductive way of living.

Before meeting Sciola, I didn’t know what to expect. I had heard a lot about him, I knew he was a famous artist, yet I was totally taken aback by the connection he has established between nature and his work. He’s not just grateful to nature for its continuous gifts to humanity, but he’s also aware of what his place is within planet Earth, and it seems like he’s somehow closer to the mysteries around the universe.

Pinuccio Sciola has lost his battle with cancer and passed away on May 13th, 2016. I feel lucky I had the chance to meet him and see him making music out of stones. Check my video to listen to Pinuccio Sciola sounding stones.