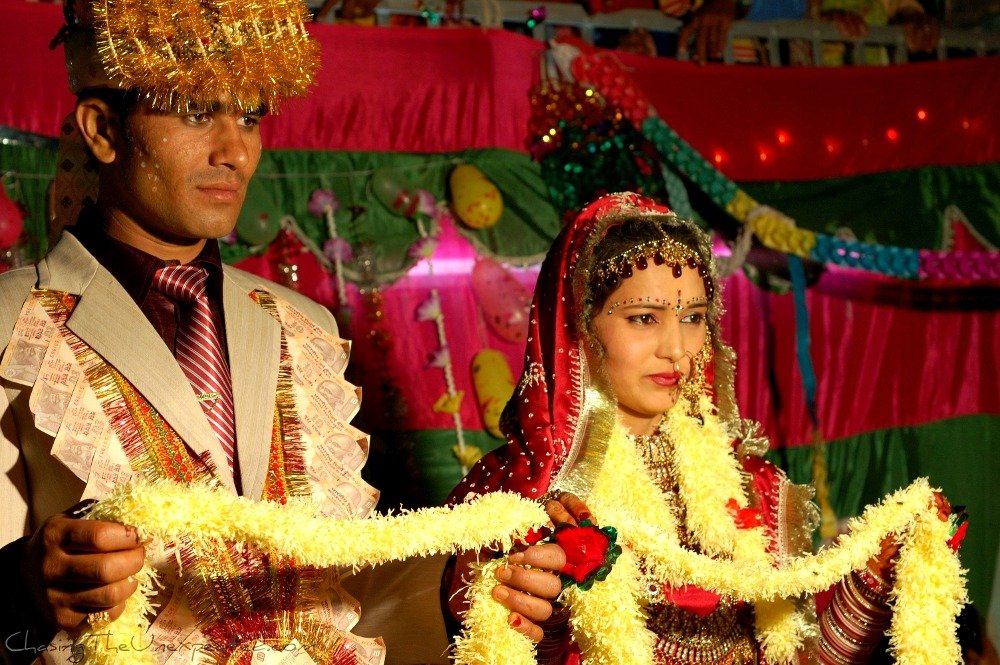 Even though I had no idea where I was going, I felt lucky enough to be invited to a traditional Indian wedding.

I repeatedly asked the locals I was with, but none of them seemed very sure about it, so I just gave up and accepted the fact that in the Garhwali region of Uttarakhand, India, there still are places you cannot find on the map.

What I do know, however, is that to reach this godforsaken village took us hours from Manila, which, given the roads we had to pass by, doesn’t necessarily mean it was that far.

Most of the route towards the traditional Indian wedding was completely covered with huge stones, and we definitely struggled to make our way out of them and reach the longed spot.

Now, calling it “village” might look inappropriate to many people’s mind, let’s say that it was a small conglomerate of houses with seldom natives hanging around and with an ever-present temple. More than one temple actually, but it’s India after all, and temples are one of the main factors of Indian charm and peculiarity.

So, after all the necessary trouble, we finally reached the first temple of the wedding, where the friends and family of the groom (mostly men) were gathering in the wait to leave towards the house where the actual marriage was going to take place. We stationed there for less than half an hour and then we made our way to the final destination, where friends and family of the bride were waiting.

I was told that that was the main of the five days of celebration, and the day after would have been the last one, when the couple could finally get to their place and rest.

The night I was there was when the priest celebrated the marriage, and probably one of the first times bride and groom actually met, as this was very likely an arranged marriage, like most, if not all, marriages in the Uttarakhand.

A traditional Indian wedding in Uttarakhand

Due to the striking difference with the weddings I’m used to and the rare possibility to attend a so traditional ceremony in such an unknown place, made me spent most of the time taking pictures.

In the beginning, I was worried to be invading the couple’s privacy and on the way to the wedding I kept asking my friend if it was fine for me to take photos, but my doubts were swept away as soon as we arrived, as children immediately asked me to be captured by my camera.

So here it is, a traditional Indian wedding, how it’s celebrated in the Garhwali region of Uttarakhand.

Seen through my eyes, lens and through what I managed to understand from locals’ seldom explanations and the ones of the bride’s cousin since nobody else could speak English.

I was struck by the spontaneous hospitality of the people in this village, I couldn’t stand up one minute that immediately a chair was brought behind me, I couldn’t stay one minute with empty hands that tea, sweets and any sort of food was offered to me, to the extent that dinner time, I was already full.

I wish the couple a very happy married life, and I would love to see them again in a couple of years, to show them my pictures and maybe this post.

When you attend a traditional Indian wedding, you can expect to see beautiful and elaborate ceremonies full of singing, dancing, and rituals.

These weddings are incredibly vibrant and festive, and they offer a unique glimpse into Indian culture. If you’re lucky enough to be invited to one, make sure to take in all the amazing sights and sounds! You won’t regret it.

What should I wear to an Indian wedding?

When attending an Indian wedding as a guest, you should wear clothes that are appropriate for the occasion and respectful of the culture. I personally attended with my shirt and jeans.

Indian weddings are usually very colorful, so you can definitely dress to stand out! However, avoid wearing anything that is too revealing or unsuitable for a religious ceremony.

As far as colors go, white is considered auspicious and is often worn by guests. However, if you want to add a little more color to your outfit, pastels are always popular choices.

You can also go for jewel tones like emerald or ruby. If you’re looking for something traditional, consider wearing a sari or lengha. These garments are beautiful and festive, and will make you feel local.

How long is an Indian wedding?

The length of an Indian wedding varies depending on the caste, religion, and region of India. However, most weddings last for days, sometimes weeks.

Then the post-wedding ceremonies take place, which can last until the wee hours of the morning. Overall, an Indian wedding can easily last 3-5 days among the both families!

How Much Does Indian wedding cost in India?

India is a land of contrast, and that is reflected in the wide range of wedding costs you will find across the country. A traditional Hindu wedding can cost upwards of $100,000, while a more modest affair may be as little as $5,000.

Of course, there are many factors that will affect the cost of your Indian wedding, including the number of guests you invite, the location of the event, and the time of year you choose to tie the knot. But no matter what your budget is, there are ways to make your Indian wedding an unforgettable event.

Generally speaking the cost of an India wedding way less than a wedding in Europe or North America and obviously directly connected to the average income.

Who pays for the wedding in India?

It depends on the religion and caste. In Hindu weddings, for example, the bride’s family pays for most of it, although the groom’s family may also contribute.

In Muslim weddings, the groom’s family pays for everything. Christian weddings are typically more expensive, and both families often share the cost.

That said, in recent years, no matter the religion, more and more grooms are pitching in to help pay for the wedding. And with the rise of dual-income couples, it’s becoming more common for both families to contribute financially to the wedding.

How is a wedding celebrated in India?

A wedding in India is typically a very lavish affair, with all the bells and whistles you could imagine. There are lots of different rituals and traditions that are followed, depending on which part of the country you’re in.

The bride and groom are usually dressed to the nines in beautiful traditional attire, and the wedding itself is usually held at a grand venue with hundreds or even thousands of guests in attendance.

The festivities start with the baraat, which is a procession of the groom and his family and friends dancing their way to the wedding venue.

This is often accompanied by music and drumming, and often gets fairly rowdy as everyone enjoys themselves. Once the groom arrives at the venue, he then has to enter through a gate where he is welcomed by the excited bride’s family.

What is the marriage age in India?

Marriage age in India is 18 for girls and 21 for boys, though there is a significant amount of child marriage happening in the country.

According to the 2011 census, over 25% of all marriages in India were child marriages. The Prohibition of Child Marriage Act outlaws child marriage, but the law is not well enforced.

49 thoughts on “Moments from a traditional Indian wedding”