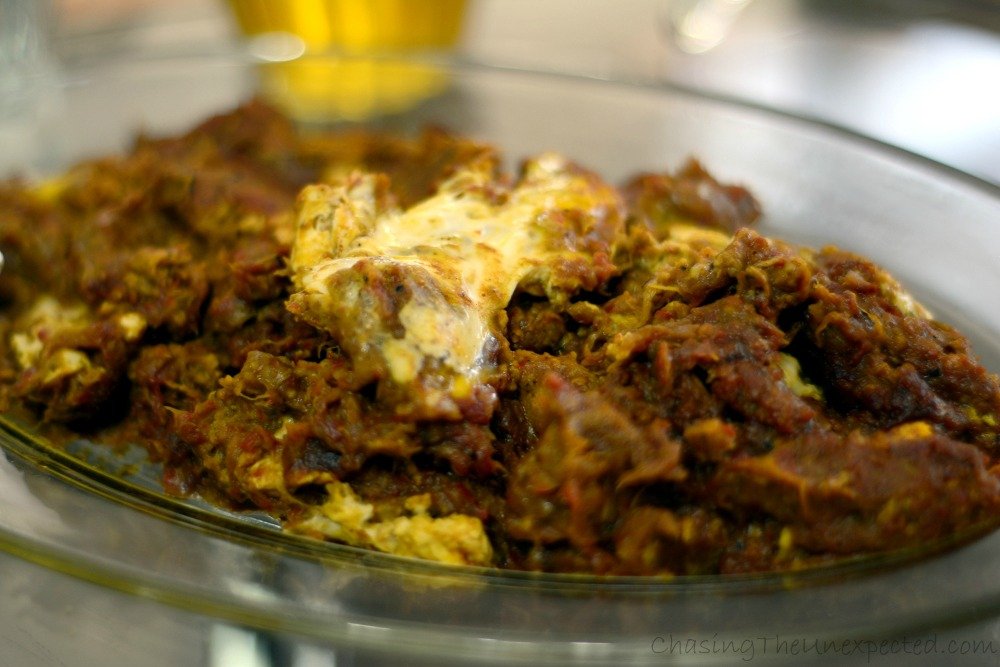 Everywhere I go I always try my best to blend in with the locals, and this usually means finding (and buying) traditional handicraft and food delicacies, with the inevitable result of carrying a good deal of extra kilos back home (not only in my suitcase).

During the trip I took to Iran last May, I found out that one of my favorite Iranian dishes is eggplant-based Mirza Ghasemi, an insanely delicious vegetable stew topped with eggs. As palatable and precious as it is, its origins couldn’t be anything less than illustrious. Mirza Ghasemi, in fact, was invented by Mohammad Ghasem Khan, former ruler of Rasht, capital of northern Gilan province, and Iranian ambassador in Russia during Qajar dynasty, nonetheless.

Mohammad Ghasem Khan was a great chef and he created the dish when he was on duty in Saint Petersburg, introducing it in his native Gilan in 1860 when he returned home, where it became a widely popular dish.

Quite fortunately, I had the chance to taste Mirza Ghasemi in Lahidjan, in Gilan province, where, as I’ve mentioned in a previous post, I was a guest at my friend Madi’s house. I’m positive that you will like the dish in any restaurant you will go to, but I won’t deny that it will hardly be like a proper homemade delicacy.

Thanks to legendary Iranian hospitality, I could directly ask a local to unveil to me the most traditional recipe, made of smashed baked eggplants cooked with stir-fried garlic and freshly peeled tomatoes, and finally mixed with scrambled eggs. The dish is actually not difficult to make, here’s the recipe.

At first, prepare the ingredients: eggs (6 to 8), eggplants (two large), peeled chopped tomatoes (at least 6), garlic, turmeric, salt and pepper. After piercing the eggplants with a fork, you can either bake them in the oven to make them more tender or, as Madi’s mom does, bake them directly on the fire of the stove to give them a more genuine taste.

Now put olive oil in a pan and add the finely chopped garlic (plenty, depending on how strong you want the dish to be) and two teaspoons of turmeric, stir-fry for a couple of minutes and add the roughly chopped eggplants and tomatoes. For an ideal result, you should add the eggs at the end after frying eggplants and tomatoes to make them better blend with the rest and to allow the dish to become thick enough with no soggy bottom or texture. The best way to enjoy Mirza Ghasemi is matching it with Zereshk Polo, saffron rice with sour cranberries, another dish that I’ve been trying repeatedly to make and, after one year, am only starting to get close to.

Even though Iranian national cuisine relies quite heavily on meat, in Gilan it’s easier to find vegetarian treats thanks to its humid climate: here whatever seed you drop will grow and thrive. If you happen in Lahidjan, some of the best places to try out Mirza Ghasemi are Mahtab Restaurant in Imam Reza Boulevard, right in front of the city’s big lake, Ziba Restaurant, same Imam Reza Boulevard, and Vali Restaurant in Langrud Road, while if you are in Rasht, try Muharram Restaurant in Imam Khomeyni Boulevard, famous for their Gilaki cuisine. On another note, if you are not going to Iran any time soon but the recipe and the pictures are tempting you to try it at home, go ahead and let me know the outcome!

2 thoughts on “Mirza Ghasemi, the recipe of one of my favourite dishes from Iran”