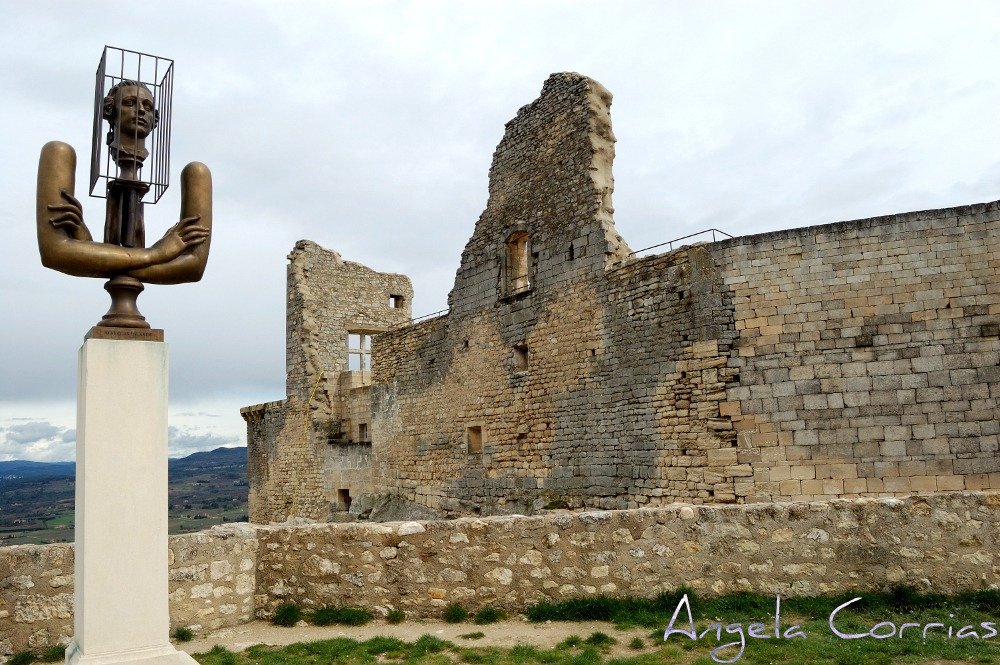 Although Provence seems a very peaceful and innocent corner of paradise, it houses what once was the adored residence of the infamous Marquis de Sade. When I learned this piece of information, during my usual research prior to every trip, my passion for history sparkled inevitably, and a visit to the small and quaint Lacoste town became a must.

“My manner of thinking, so you say, cannot be approved. Do you suppose I care?” – Marquis de Sade

Lacoste is a small town in the Vaucluse department of the southeastern French region of Provence-Alpes-Côte d’Azur. Located 6 km east of the picturesque town of Menerbes, Lacoste is nestled in the Luberon Natural Park and it faces the village of Bonnieux on the opposite hill.

Surrounded by greenery and vineyards, this is the perfect place for a relaxing holiday, quiet nights and a base from where to discover the rest of the charming Provence region.

Is Lacoste worth visiting?

During my short stay in southern France, I was based in Cavaillon, a lively town in Provence nestled between the Luberon Mount and the hill of Saint Jacques. Apart from Cavaillon, I have visited the neighbouring villages, some of which were as picturesque as inaccessible, such as Gordes and Village des Bories. One of these quaint villages was Lacoste, where the castle of the de Sade family sits, perched on the very edge of a steep cliff, and since French castles are so famous, I had to visit this, too.

Before venturing inside the ruins of the castle, we meandered through the steep and winding cobbled alleys and the vaulted passageways of Lacoste village, an adventure in itself that whirls you back to some centuries ago. While the bottom of the town is more modern and hosts also restaurants and cafes, when you start going uphill and step over the 14th-century Portail de la Garde gate, you will end up straight into its medieval streets that so much have retained their original charm and look.

Apart from the horrible fact happened in 1545 at the hands of public official and President of the Parliament of Aix-en-Provence Maynier d’Oppede, who carried out a massacre in Lacoste killing all its residents with the motive of persecuting the heretics, life here has been quite tranquil throughout the centuries.

A favourite destination for artists, poets, sculptors and painters, including the surrealists Breton, Ernst and Char, Lacoste was the village where American painter Bernard Pfriem founded the Savannah Art College still operative and welcoming several students every year. While wandering through the town’s narrow alleys, don’t forget to visit also the 12th-century Saint Trophime church in Place de l’Eglise square, the belfry dating back to 1793 featuring a wrought-iron campanile, the old windmill, the fountain, and the local washhouse.

On my way to Lacoste, throughout the maze of country lanes and small towns, I kept wondering what kind of castle I was going to find: had it managed to retain some sign of the Marquis’ wild parties? Due to my visionary imagination on life at the time of de Sade, when I arrived in the village, I struggled to spot the noble residence, although it was standing right on top of the hill in front of me, in all its majesty. I asked one of the seldom dwellers where I could find the castle and he replied wittily “Mais c’est juste là-haut, madame!“

I looked up and stared at the castle with a mix of wonder and disappointment. “Quoi??” I thought, acquiring a little (due) French attitude. “The oh-so-infamous Marquis de Sade lived here?!”

Admittedly, what now might look like a wreck, in the eighteenth century certainly was a great piece of architecture: the French had a real fixation for luxury and etiquette, and this castle belonged to a noble family, nonetheless. De Sade’s gentle origins didn’t stop him, though, from writing quite explicit sexual content and being jailed for that. Thanks to his writing skills, was he alive now, he would be very proud to know that we still use a term derived from his own name: sadism. I wonder how outrageous he would have been considered nowadays.

While I was wandering the tangle of picturesque alleys that forme Lacoste village, I kept thinking that the Marquis de Sade couldn’t have lived anywhere more appropriate than in this quirky corner of French grandeur. The narrow cobbled lanes that lead to the sinister castle, make it captivating as much as inaccessible, boosting his myth of dangerous man. Of course, this impression was enhanced by the fact that most cities now have paved and large roads, that the castle is a wreck, and that when I went grey clouds were threatening heavy rain, but it did look creepy nevertheless.

Although it was bought and partially renovated by the fashion designer Pierre Cardin, the castle can’t be visited inside. A stroll around the village is, however, a nice experience to be enjoyed slowly, to absorb the atmosphere of the town and stare at the great view down the valley.

When and How to Visit the Château De Lacoste?

4 thoughts on “Visiting Beautiful Lacoste, Provence, and the Castle of Marquis de Sade”