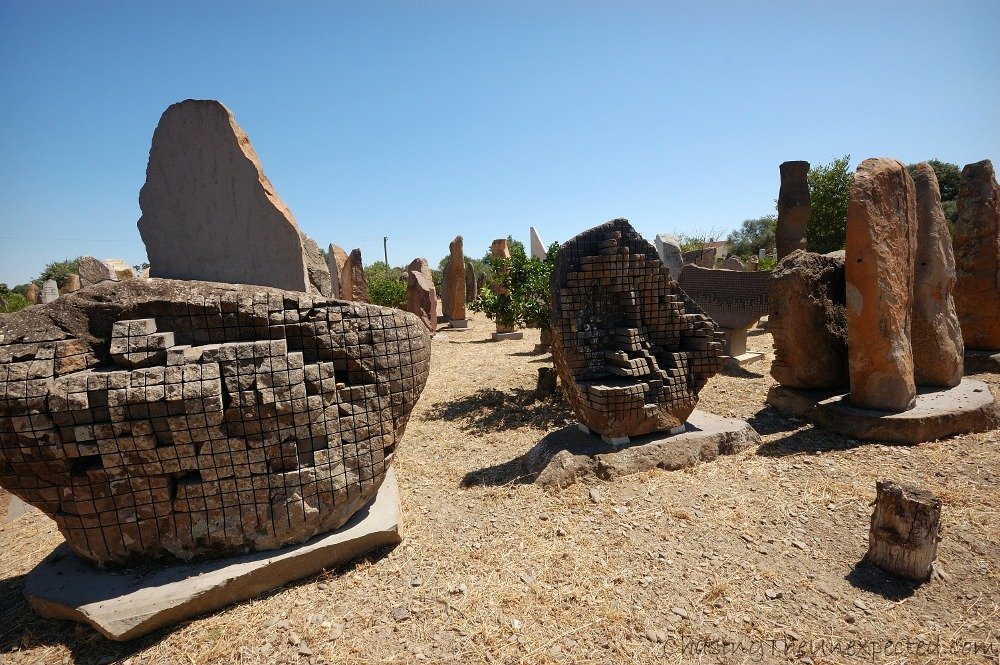 When I wrote the post on Pinuccio Sciola’s singing stones, I received many messages from readers asking me to post a video to give an idea of what kind of sound we think the dead matter was releasing. Pretty understandable as you don’t see many people making music out of seemingly silent rocks.

“While using the oxyhydrogen flame to heat and cut the stone, I saw a red fluid coming out of it, it was its blood. Basalt is a volcanic stone, and it was going back to its lava origins, it gave me the willies.”

Video: Pino Sciola’s Sounding Stones, the Memory of the Universe

READ MORE: Check out our detailed guide to planning a trip to Sardinia.

Pinuccio Sciola is, undoubtedly, one of Sardinia’s best secrets, and by all means one of our regional pride.

He’s known all over the world, and if you have the chance to talk to him you’ll understand why. His art involves a fascinating holistic approach that embraces all aspects of a single phenomenon. With him, stones become alive, show their philosophical importance, allow us to linger and enjoy yet another sound of nature, and tell us a thing or two about the universe.

Different languages, disciplines, yet-to-discover natural laws, all meet in the realm Sciola has created in his open-air museum. Which is “overwhelming in the evening, when the sun sets beyond the skyline”, according to its king.

Defining Sciola merely as a sculptor would be limiting to both his art and his stones.

If only for a minute we think over the meaning of discovering and listening to the sound hidden, somehow withheld, inside these stones, we would see Sciola’s sounding stones as the means for uncovering a bottomless treasure trove.

We would discover a voice that potentially could reveal new aspects of our most remote past to us, up to how the planet was created and what happened prior to humanity

If limestone is fossilized water, what can a piece of this material tell us about its own creation? It’s almost as if the earth wants to talk to us and finally it’s managing to through Sciola’s hands.

Probably because I’m a native of Sardinia, I like that the art through which Pinuccio Sciola showed us the memory of the universe comes from my same land.

Our thousand-year-old stone tradition, the magnetic fields around Giants’ Tombs, and the 8,000 stone towers scattered around the whole territory are evidence that Sardinia has always had a special relationship with stones. And this is why discovering the ancient stone buildings are one of the best things to do in Sardinia.

Pino Sciola has given us a new dimension regarding sculpture. To the extent that we can enjoy his otherwise only-visual creations also with our eyes closed. By listening to the stones’ otherworldly sound, we have the impression of being hearing the planet’s inner voice and the different elements interacting with each other, with our past, present and future blending together.

The first time I met Sciola I asked him when was the exact moment he realized stones could release music and he told me he didn’t know how to answer the question. He’s right, it’s a spontaneous process everybody should go through in order to catch up with a reconnection with the earth, something we have lost somewhere during evolution.

Sometimes I feel that although we, humans, are natural beings, we don’t lead a very natural life. We don’t “earth”, we don’t walk barefoot in nature as often as we are supposed to in order to absorb the planet’s energy, feel relaxed and be connected with our genuine habitat.

Entering Sciola’s open-air museum (he was walking barefoot) was the first achievement towards this togetherness. A sort of intermediary step.

I’m aware that the video is a bit long, 7 minutes, but I didn’t want to cut too much. I felt like sharing as much as I could of this visceral sound. Enjoy it all, you might discover new elements nobody has perceived yet.