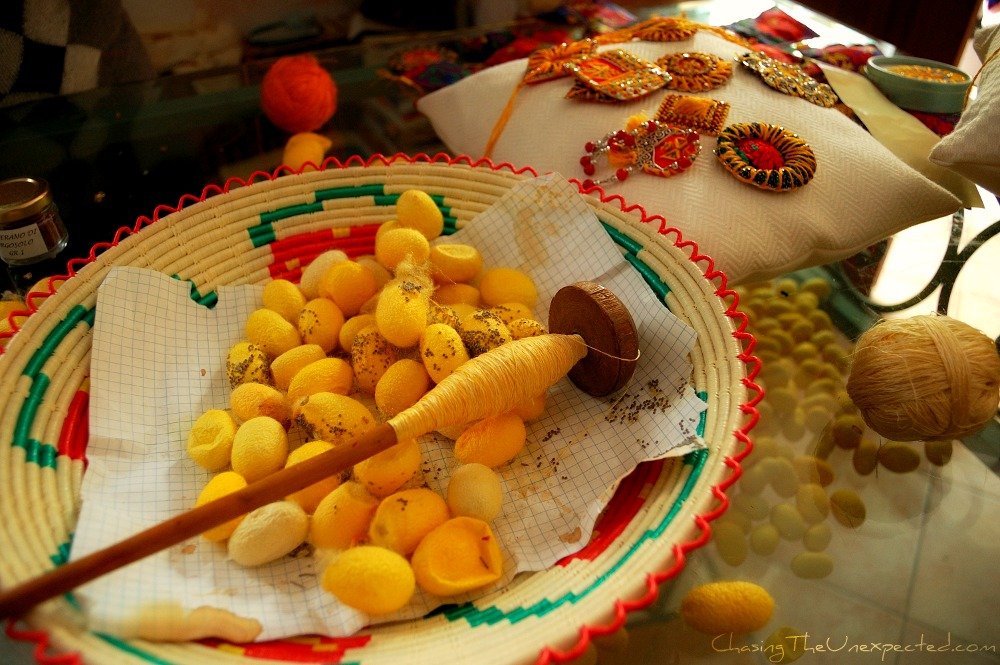 I have already written about Orgosolo stunning street art and about its antimilitarist spirit. Orgosolo, however, is not only politics. This obstreperous town of inland Sardinia’s region known as Barbagia is home to an exclusive form of ancient silk art.

Different from how they make silk in China, this is another way of producing and weaving it all together. The only thing Chinese and Sardinian silk fabrics have in common is, alas, that they both are obtained out of the cocoons.

A life devoted to the silk art in Sardinia

Although I had been hearing about “Orgosolo silk” for quite a while, only recently I had the opportunity to visit the lab-museum where this ancient and unique fabric is made.

This is how I discovered that artisan Maria Corda is devoting her life to preserving this form of art she inherited from the maternal branch of her family tree.

In the past, they probably had even less time, way less money, and much more hunger, but probably they cared because they made the art their very lifestyle.

This, in a nutshell, is what’s happening in Orgosolo. Maria is struggling to carry on with this silk tradition because Sardinian women rarely wear traditional clothes anymore. But, at the same time, as stubborn as only someone from Sardinia can be, she doesn’t want to give up on her family heritage.

Although I’ve been happy to notice that in the island ancient traditions die hard, many survive only thanks to the devotion and hard work of some citizens. This is why I think visiting Maria’s lab is one the cool things to do in Sardinia.

“You know,” Maria told me pointing out at the traditional garments, “in the past this was women’s daily clothes, so they all wore su lionzu, typical headscarf of Sardinia’s costume. Until about the ’70s women wore it on their wedding day, but now we are even losing this piece of our history, hence nobody buys it anymore”.

On the island, every village has its own dress, for both men and women. In Orgosolo’s costume, a women’s headscarf is made with this particular silk. All over Sardinia, traditional costumes, even if different from each other, they all include a headscarf. But of Orgosolo is the only one entirely made in the village, starting from the production of the fabric to the weaving.

Unlike the usual silk we know, this is harder and resists throughout the generations. So if young women want to wear it only for their wedding day, most of the times they just use their mother’s or grandmother’s one.

READ MORE: Check out our detailed guide to planning a perfect holiday in Sardinia.

The silk art from China to Orgosolo

When I went to Orgosolo to meet Maria my imagination had already pictured her aged and wearing traditional clothes herself. I soon found out she’s nowhere like I expected.

It was somehow reassuring to see a young woman devoted to a culture of inner Barbagia practiced and perpetuated by her family, -Sorighe-Mereu, since the 16th century.

Silk was first discovered in China thousands of years ago. Sericulture, the process of raising silkworms and producing silk, brought about massive changes in the delicate tangle of political, economic, and cultural affairs.

For centuries, the Chinese kept the process of producing silk secret and under strict imperial control. To the extent that exporting the worms and their eggs outside China was punishable by death.

The silk made its way to Europe

Little by little, they created the Silk Road and started trading silk westwards. In the second century, they even used it as a trading currency. They formed alliances, buy gold and make it a reward to those who did the state a good service.

Symbol of the first contacts between East and West, the Silk Road made it possible to deliver, spices, and precious stones. In some cases also ideas and inventions. It was through this harsh path that paper and compass from China reached Europe.

When the wave of oriental silk arrived in Rome, in the first century BC, the aristocratic patricians immediately understood the value of the newly discovered material.

More precious than the one made in Rome, since its process was unknown, they acknowledged it could only be imported.

Sericulture arrived in Southern Italy around the 10th century AD. But the biggest trade and subsequent production happened in the northern part of the country.

The heyday of Italian silk production was in the early 1900s, and while Italy doesn’t produce the cocoon anymore, its finished products and fabrics, especially those made in Como province, are among the most sought-after in the world.

The full process of making silk in Orgosolo

Thanks to Maria, her small town still produces its cocoons. It’s a specific yellow type that has been named the “Orgosolo breed”. It hibernates for ten months, after which it feeds on mulberry leaves for 50 days.

Finally, it refuses to eat and starts building its cocoon perched on plants and branches. It takes 100 cocoons to make one single thread, and 2000 to make one headscarf.

Maria needs one whole year to make three headscarves. She tried to get the support of the local council but she’s been unsuccessful so far. “Of course, I want to preserve this tradition, it belongs to my family since the 16th century,” she told me. “But what can I do? I need to make a living too, don’t I?”

The ideal for Maria would be to receive a sponsorship from local authorities to maintain a museum lab. Here she can weave and sell her products as well as show visitors and teach other local girls about her family’s handicrafts.

“I would love to teach how to raise the worms, get the thread and weave it,” she said.”But given the current economic situation, I really don’t feel like creating future unemployed women.”

She has a small museum and she charges a symbolic 3€ for a demonstration and an explanation of her art. But she doesn’t know for how long she will be able to keep it alive.

It’s sad to think about endangered ancient traditions. But it’s somehow encouraging to see there are people who still fight for them.

18 thoughts on “The silk weavers of Orgosolo: a tradition at risk of disappearing”