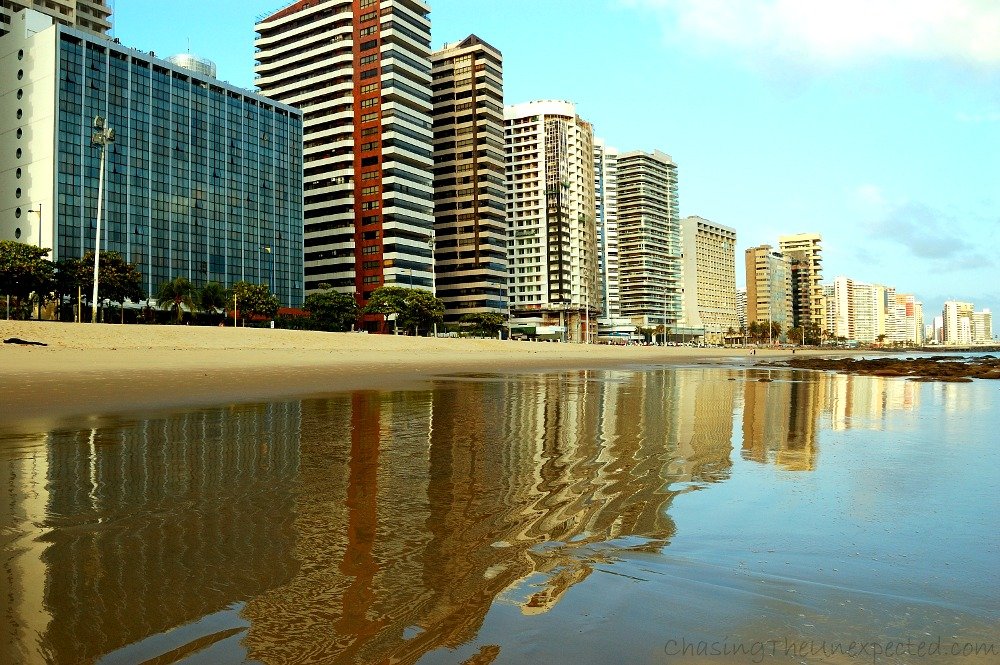 On my very second day in Brazil I was mugged in Fortaleza while strolling along one of my favorite beaches, Beira Mar. Before you think “You should have known Brazil is dangerous”, let me tell you that yes, I know many Brazilian cities bear a very sad record when it comes to street crime, but Fortaleza apparently wasn’t so high in the Brazil crime rates. Clearly, I wasn’t up-to-date.

I’d arrived about three weeks ago and have taken advantage of the tranquility of the city for catching up with some work before a new hectic season from March on will start. Although I had initially contemplated the idea of exploring Fortaleza for at least two months and do some travel in the neighboring states, this unforeseen occurring of events made me change my mind and future destination.

It was Carnival time, and apparently in those days Fortaleza street crime levels skyrocket and pickpockets feel entitled to rob passers-by since the police doesn’t deem necessary keeping the streets under control.

Also, because I know of the upsetting figures and because I’m constantly reminded by locals, who never forget to warn me every single time I go out, I usually don’t carry anything with me.

That morning, barely 7 am (pickpockets don’t sleep??), before the unforgiving sun would start hitting too heavily, I left home to go for my usual beach walk with my tiny shoulder bag with inside literally only my keys, money worth about 10 euro for some water, and a tissue.

Before reaching the beach, a guy approached me and tried to sell me some canvas. When I refused to buy the painting or whatever he was selling, he followed me to the beach and asked me point-blank “You are Italian? Give me your bag!” My first, impulsive reaction got spoken before I could activate my brain (I’m a morning bird, but it was still 7 am): “No!” I said, and immediately waking, my wiser self shouted out to the irresponsible side of my mind “What are you stupid or something? He can have a gun, give him your dress if he asks for it!”

But it was too late, the damage had already been done, and since I didn’t volunteer to give him my scant beach possessions, he came to take them. He grabbed my bag, held down my protesting arm, and kept working on pulling out my tiny purse. Since I haven’t learned to shut up in awkward moments, and since I was aware he had already decided my bag was going to be his first loot of the day, I gave it another try: “There is nothing in the bag!” Very clever attempt, to which my aggressor,  rather unsurprisingly replied: “Let me decide about it, I’ll take it anyway.” Flawless argument.

Hopeless and nearly bag-less, I tried my last attempt: I started to scream, in the vain hope someone on the long beach could hear and/or care. No help arrived, the guy was already running away with my bag. I ran after him, he even looked back, not sure if he couldn’t believe I was actually following him or hoping I would.

After I got out of the beach and emerged in the paved avenue, a lady who (finally) realized what was going on asked me pretty much the same way as if she was asking me if I’d fancy a coffee: “Did he have a weapon?” I froze, I looked at her and I replied: “I don’t think so, at least he didn’t show me one.” In that moment, as he turned around a corner, I stopped and gave up altogether, scared that someone was waiting for him and knowing full well that I really didn’t want to put myself in that situation. Fortunately, his catch was not nearly as big as he might have expected from a foreign tourist.

Now I might be giving the impression I took it with breeze and irony. However, at the moment, and for about two days after getting mugged in Fortaleza, I was frightened. The fact that it happened near my house didn’t allow me to stop for a moment thinking that I might have seen him again should I go back to the beach, and in the very next days I barely went out only when strictly necessary, without any bag and not without a constant sense of fear.

I had been mugged before, once in Rome and once I was with a friend when she was robbed in Seville. It made me angry, annoyed and caused me troubles, but I was never scared. Why? Because the pickpockets at least tried not to be seen, they sneaked their hand into my bag and ran away. This time the guy really didn’t care if I remembered his face. He came out of one of the beach kiosks carrying a series of paintings to sell (or pretending to sell) and just decided to steal my purse.

Fear was replaced by a sentiment of anger. How was it possible that no police was around knowing that Carnival days are a pickpockets’ feast? How was it possible that everybody takes it for granted that if you go out with a bag you are likely to get mugged and nobody is doing anything about it? The first thing that comes to my mind is that this is not exactly an incentive for tourists to come, but then I remembered this is not exactly Fortaleza’s first priority.

I’ve been coming to Brazil every two years for the last twenty years, and the changes I have witnessed unfold in such a huge country in so little time since Lula got to power are incredible. Even who didn’t vote for him recognizes that now the poor can eat. This is why I fail to understand why the local administrations are not addressing the issue of street crime in Brazil properly.

Although I know they won’t rob you every time you go out with a bag, don’t underestimate the problem, especially because thieves can be armed.

Here are my personal tips on how to stay safe and avoid getting mugged in Fortaleza (and Brazil in general).

Brazil crime rate is notoriously high, so when traveling there you need to pay extra attention to some safety rules. To avoid getting mugged in Fortaleza and any other city in Brazil, instead of carrying a purse or visible wallet, wear pickpocket-proof travel clothes including the great Active Roots Security Belt that contains a zipped pocket where you can hide your cash when traveling. They are made with secret and secure pockets where you can keep money or any small object you need to carry with you such as cash, mobile phone, credit card, house keys, etc.
Click here for more information on the types of safety clothes available and the latest prices.

Linked to the first point, due to the high rate of street crime in Fortaleza, whenever you go out, be it day or night, don’t wear jewelry, avoid carrying a purse, and in general, don’t wear anything expensive.

3. Don’t carry too much cash

Whenever you can, try to avoid carrying too much money, but if you do, prefer wearing safe clothes with secret pockets and distribute your cash all around instead of only one place. Don’t pull out your money in the streets, always prefer closed places such as shops or restaurants. Obviously, if you need to withdraw cash you will need to carry your credit or ATM card. Although, warn your bank because they are likely aware of Brazil crime rate and they might block your card.

Unless you have to, avoid carrying your passport at all times. Prefer a copy instead, and keep the original in the safe of your hotel room. Same for all your other papers, credit or ATM cards, etc.

If it does happen that you get mugged in Fortaleza or anywhere else in Brazil, do not react like me. Give them your bag and forget about it. Pickpockets in Fortaleza often carry a weapon and don’t think twice before using it, so your purse should be the very last of your concerns.

As per the old saying, after a storm comes a calm, so after my anger for getting mugged in Fortaleza got sedated I signed up to a Yoga course. So, a good amount of workload, a fantastic Yoga class twice a week around the corner and no plans to visit the city’s attractions (also because I have already visited most of what Fortaleza offers) made me experience the place like a local, taking advantage of the great food, fruits and veggies it has, wonderful weather every day and a relaxed environment to carry on with my work and get ready for my next adventures.

**Update** In a report of the most dangerous cities in the world in 2016, Fortaleza ranks in the 12th place, followed closely by other cities in Brazil such as Natal, Salvador, Sao Luis, Manaus. As of now, Brazil crime rate is still at very upsetting levels, the local administrations failing to provide their citizens with basic safety measures.

31 thoughts on “Mugged in Fortaleza, how a bad experience can spoil your holiday (plus some safety tips!)”