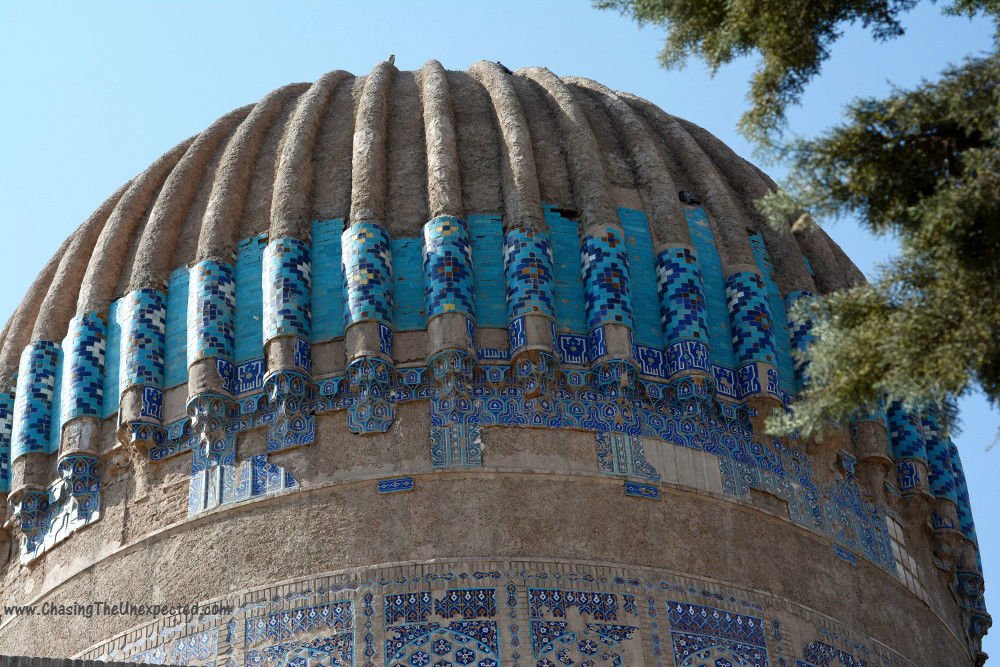 “Our covered bazaars are even older than the ones in Europe!” swiftly let us know Jawid Zargham, Head of Culture and Art in Herat when he signed our authorization to access and photograph the city’s historical sites. “We are trying to buy the remaining covered bazaars and caravanserais from their private owners so we can restore them,” he continued. For a while now the city council has been committed to rescuing the history of Afghanistan. What a bold project, you might say, and bold it is indeed.

Herat, western Afghanistan, once a crucial stop along the legendary Silk Road, is a city steeped in history. Home to several caravanserais and bazaars, now the local government is striving to renovate them and bring them back to their original splendor. While this effort can be seen simply as an attempt to boost the local tourism, in Afghanistan it sends a whole different message.

Saving the history of Afghanistan one piece at a time

After four decades of uninterrupted conflict, this is the last effort to save an important piece of Asian and human history that is in danger of being destroyed and lost forever.

Just like centuries ago, the bazaars are still running, both the covered and the open ones. Just like in the past, trades, negotiations, commerce, business, buying and selling still go on every day. In Herat bazaars, all types of goods are being sold, from copper pans and samovar to balls of wool to kites. Burqa-clad women alternate to old men wearing pirhan-tumban, the typical Afghan clothes made with a long dress on top of large pants, the clacking of iron and steel and the darting of motorbikes always in the background.

In the past, each bazaar dovetailed with a caravanserai, and still now they are strongly related. The ones that still exist, that is.

Herat was home to some five caravanserais, but now only three still stand, even though dangerously crumbling. And this is precisely what the city council wants to avoid, that yet another piece of Afghan history gets lost and forgotten not only to the passing of the centuries but also to the decades of war, terrorism, and attacks.

The whole world was shocked when the Taliban destroyed the thousand-year-old statues of the Bamiyan Buddhas, chanting Allah Akbar at every explosion that demolished yet another proof of Afghanistan’s rich past, two ancient statues that resisted the centuries, the succession of different civilizations, and that in 2001 fell to the hands of hatred, greed, and ignorance. These are not the only heritage sites that were ravaged in Afghanistan, repeated attacks, years of a terrorist regime, invasions and occupations have put the country to the hardest test.

Guesthouses along the Silk Road trading route, alongside providing rest to the merchants, the caravanserais were the place where travelers and traders exchanged goods, ideas, customs, even religious concepts. This is why they are widely considered crucial to the interaction between cultures that was the basis for the foundation of Central Asian values. Today, the caravanserais in countries such as Iran and Uzbekistan (also part of the ancient silk route) have been restored into tourist landmarks or hotels. But Afghanistan has been a war zone for almost 40 years and these buildings have been neglected.

The caravanserais of Herat beautifully complete the scene of the medieval Silk Road, their internal structure and decorations are capable to whirl you back in time. Probably, their original appearance and features are what makes them so precious and so revealing of a distant past. Obviously, they are not accommodations for traveling merchants anymore. They serve as the warehouse for the adjacent markets and they are crumbling. Entering and visiting them is one fascinating way to discover the history of Afghanistan.

Caravanserai Akhundzadeh, the guesthouse merchants entering the city from the Iraq Gate, is of stunning beauty, its walls and pillars finely carved in the typical Herati decorative style. Its wooden doors that once separated the private rooms from the central courtyard are now closed. Modern shopkeepers go back and forth with their carts loaded with goods and they directed a pretty puzzled look at us probably wondering what was so interesting that kept us there for hours taking pictures and videos, climbing to the upper floor, admiring the flowery patterns chiseled in the columns.

I had been reading about the silk routes for a while, I have attended themed exhibitions, I had already visited places and caravanserais, but finding myself right in the middle of a “living” one, albeit serving different purposes, made it easier to picture the old merchants with their donkeys stopping there for the night and some refreshment.

Coming from the Kandahar Gate, travelers would stop at Caravanserai Zard and sell their goods at the Tim Che, “Little Bazaar”, a beautiful covered market that is literally crumbling. We climbed to the upper floor but couldn’t go further after the staircase as it would have collapsed. Both on the lower and ground floor, its wide, run-down-looking wooden doors are shut.

Part of Herat’s commercial heart is also, and I would say especially, the Old City Bazaar and its adjacent Arbabzadeh Serai recently renovated with the support of the Aga Khan Trust for Culture (AKTC) that has been carrying out a series of projects to protect the sites that can preserve the history of Afghanistan. Works began in 2006 and the roof has been completed renovated. Two stories of shops surround an internal courtyard and everything is covered with a lightweight timber structure, originally made with bricks, in the shape of a barrel vault.

Bazaars and caravanserais are laid out all around the beautiful Chahar Suq Cistern.

Built in 1634 by governor Hassan Khane Shamlo, it was used until the 1970s to store water for the residents of the old city. The cistern consists of a firebrick structure that supports the octagonal base of a 20-meter dome. The passing of time and the years of conflict didn’t spare this cistern either, and while the foundation suffered from the signs of settlement, the dome was yet another victim of the war.

During the first stage of the restoration works, the earth from the roof was removed and reconstruction followed, both on the dome and inside the cistern, even sections of the old waterproof lime plaster were repaired and rebuilt following the original technique. For as fascinating as the Chahar Suq Cistern is, climbing on top of it is very revealing of changes that have been made in the architectural styles of the city. From the top of the round dome, you can see both the old-style mud houses and the new buildings that started rising after the US-led intervention in 2001. This one single view gives you a glance at different eras of Herat’s history, different building styles, different generations and how fast the time is passing by in Afghanistan.

»»» To know more about the things to see in Herat, check out our detailed guide to the city

More sites to be preserved in Herat

The bazaars, the caravanserais and the historical gates of the city are not the only cultural heritage sites that need protection.

In the city center is also Alexander the Great’s citadel, a stronghold used by the king of Macedonia to protect his troops from popular riots when he decided to conquer the Persian Empire and invade Herat. This large and stunning fortress has endured the most dramatic events of Afghan history, turned into a royal residence and used by the different leaders in any way they deemed necessary to keep their power.

Its privileged viewpoint made it a perfect post for different armed groups, Mujahideen first, then the Taliban, who occupied the ancient premises to use it once again, and maybe for one last time, for what it was built in the first place, a fortress. A joint operation of UNESCO, AKTC and the US Embassy brought the citadel back to its original splendor and today it’s possible to visit it when there is no official meeting or event scheduled.

Afghanistan is not really a common tourist destination, and most sites have a high level of security and require the council’s authorization to enter. Like the tomb of Queen Goharshad Begum, a magnificent mausoleum where the beloved queen, wife of Herat’s Timurid emperor, Shahrukh, is resting beside her son and a stone’s throw away from the towering minarets she made build and that are now the symbol of the city.

Countless are the challenges the local government is facing, and the main of which is the fact that Afghanistan is still a war zone, terrorism is still present and terrorist attacks are still a reality. This is also why so far not all the historical sites haven’t been restored, but the Culture and Art Department of Herat wants to act before it’s too late.

If you are thinking about traveling to Afghanistan and you need some tips, check out our other articles:

How to photograph Afghanistan (and stay safe)

Travel to Afghanistan, a full guide

The mistakes I made when I traveled to Afghanistan