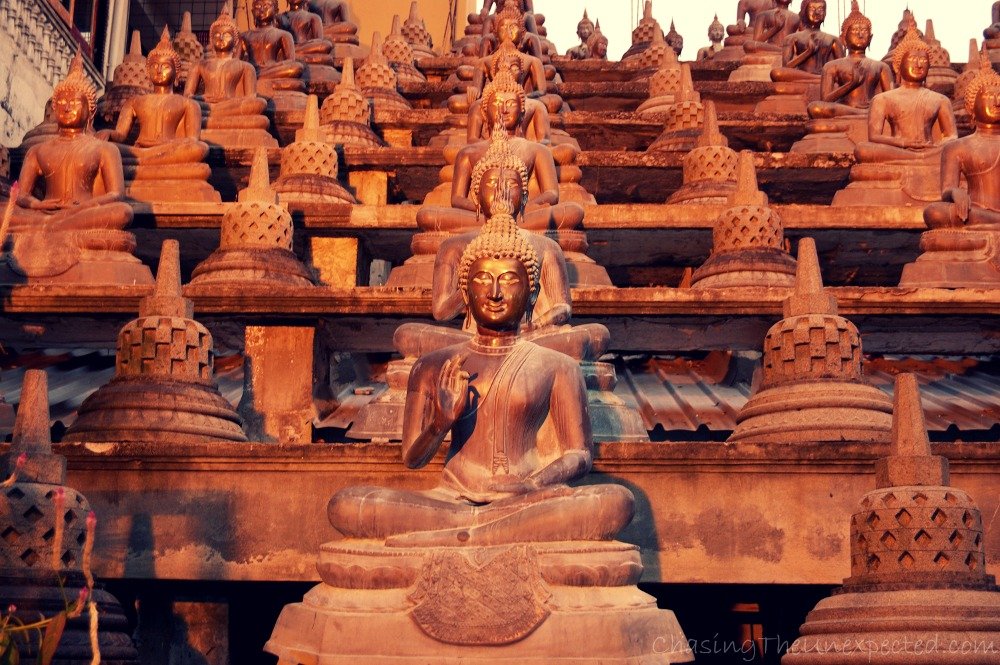 For as much as I enjoyed the Pettah district, there are many other places to visit in Colombo. One of the most important and culture-rich destinations in Sri Lanka, Colombo is a vibrant capital packed with landmarks to explore, great restaurants, luxury hotels, fantastic Ayurveda spas, and charming temples.

I spent a few days in Colombo so I didn’t see everything the city has to offer but I did manage to get around and explore as much as I could. I suggest you move around by tuk-tuk, the local rickshaws because they go much faster through the traffic and they are also a much cheaper option than taxis.

One of these included also arguing with tuk-tuk drivers. I know what you are thinking, I was the foreigner there, if they were cheating is because their life is tough, and it’s not fair of me to argue over their fare. All true, but after two weeks of being cheated right in your face, it can happen that you lose it and just shout at them, not all of them, just the unlucky ones who happen to get in your way when you are tired.

This being said, I don’t think it’s worth it to spend more words on this subject, first of all, because it happens just about everywhere in the world, and second, because it really is a minor aspect of my stay in Sri Lanka, a country truly able to amaze you and suck all your energies.

I got back almost a month ago, and somehow I still feel like I stepped over my doorstep only yesterday. If you’ve been following my blog and adventures for a while, you’ll know that I love my life in Rome, exploring the city where I’ve studied and lived for seven years before taking the plunge of a nomadic lifestyle, and having a place to call home, but every time I travel something comes back to me. I think it’s only natural that I miss my expat life, and Sri Lanka has a role in reminding me of this.

I do love Asia, I’ve experienced expat life in China and studied Chinese, I travelled to India and Thailand, I enjoy Asian spontaneous manners, and Ceylon is one of those countries that definitely leaves some marks on you, such as some side effects. Mine? I can’t stop drinking tea from dawn to dusk and I’m having a hard time enjoying any food that doesn’t have that burning sense of exaggerated chilli taste, to the extent that I find anything I buy in Italian supermarket labelled as “chilli” almost sweet.

Anyway, apart from the issues linked to my taste buds, my first impression of Colombo was probably what you feel every time you visit a new place, wonder, awe and proneness to discovery. My second impression, on the other hand, was one typical of me whenever I travel. It took me less than two days to acclimatize, familiarize with the surroundings and realize that, why not, I wouldn’t mind living there for, say, a year. Old habits are always die hard, aren’t they?

If you do a bit of research before heading to Sri Lanka, when landing in Colombo you’ll see why Arab traders called it Serendib, pleasant surprise.

Confronted with a huge expanse of green both sides, a forest of tropical trees will follow you wherever you will be traveling to within the country.

One of the first things I visited was Colombo’s National Museum, a huge collection of anything related to Sri Lanka history, culture, religion, traditions and art. Seriously, whatever curiosity you might have about Sri Lanka will be satisfied. Two floors of tools, pictures, explanations, statues, paintings and fabrics will lead your path around all that concerns former Ceylon, its stormy past, diverse society and rich heritage, the aspects stemmed from Hindu influence, with colors and loudness, the Muslim component, and the British/Portuguese/Dutch colonization.

Photos and explanations will virtually take you to other parts of the country, the right departure point for exploring Sri Lanka because, as a shop keeper told me, “most tourists stay in Colombo one or two days and then hit the road either north or southbound”, which is also what we did.

Worth a visit in Colombo are also the Natural History Museum, in the same complex with the National Museum, a rich exhibit of mammals, insects, birds, fish and, as a very new opening in the upper floor, a section devoted to local engineering, especially the great ancient cities of Sigiriya and Polonnarwa, the Dutch Museum in Pettah, set in the residence of Dutch governor van Rhee, mansion that still retains the typical architectural features of the Dutch colonial period, and the old Town Hall, now a dusty gathering of old machinery in the ground floor and a creepy reproduction of an official meeting int he upper floor.

Apart from the buildings belonging to the past and present political power, Colombo also boasts a pretty sweet collection of temples and worship places, especially buddhist, since it’s the country’s main creed. The first temple we visited was Gangaramaya, a chaotic, dishevelled assortment of everything holy coming from both buddhist and hindu rituals, a loud compilation of sounds, bells, chants and murmurings, with orange-clad monks ambling proprietorially about. Oddly enough, despite the bedlam, the place oozes peace and calm, the kind of serenity that one can only expect to find in Serendipity, and the kind of serenity that directly leads to Seema Malaka temple, a lovely little sanctuary floating in the middle of Beira Lake, not far from Gangaramaya.

We happened there in the evening, after sunset, so the night lights flickering on the calm waters inevitably added to the cozy flavor of the place. A couple of monks were enjoying the evening breeze after the usual blazing heat. Here, too, there were Hindu gods, Ganesha, Parvati and the omnipresent Shiva, lurking literally at every corner from their little cabinets.

After the holy experiences, we had dinner at Taprobane restaurant within the Cinnamon Grand complex, a glitzy, luxurious complex of hotels, resorts and restaurants, where we tucked into a huge buffet displaying all sorts of dishes. It was excellent and definitely different from my usual simple, rustic, modest, etc. eateries, but, if you ask me, I still prefer the down-to-earth places. Obviously we have also tried the small canteens and cafeterias, but probably not as much as I would have liked.

In the days we have devoted to Colombo we managed to do anything we could to experience the city and the culture, we visited its handicraft village, watching not only the finished pieces but also how they were made, from batik sarongs to temple masks to wooden carvings, attending the traditional muslim wedding of Raashid, our common friend, and drooling at some gorgeous precious and semi-precious stones in souvenir and gem shops. Happy and satisfied, we then booked our tours around the country, which will be the subjects of my next posts, leaving my last memorable experience to when we came back to the capital.

After traveling north and south I considered I would have had still a couple of days in Colombo, and this is precisely when I pampered myself with an ayurveda treatment.

So, on my very last day I booked an hour of herbal oil massage completed with a tiny glass of some herbal tonic. The girl who did my massage at Siddhalepa Spa looked so tiny that I didn’t realize at the beginning how vigorous she could be. Obviously I had briefly forgot I, too, am tiny. The massage was calming as well as vigorous, to the extent that I almost fell asleep while enjoying the intoxicating scents being released from the oil mixture spread all over my body.

I did have all experiences I could think feasible in a couple of days, but like for all other places I’ve been to, it’s always never enough, which, as a pity as it might sound, it’s the best excuse to plan another trip.

14 thoughts on “Enjoying the culture, traditions and Ayurveda of Colombo, Sri Lanka”