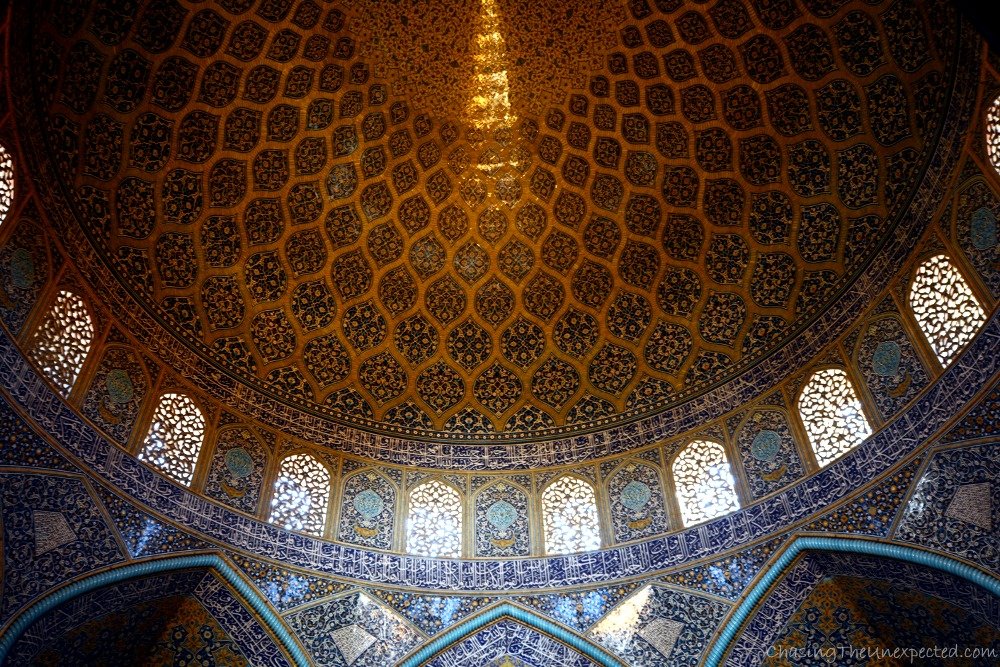 Any trip to Iran is made more pleasant by the many aspects of the local culture, from its food to the local famous (and seemingly favourite piece of info in US travel writing) sense of hospitality, to the emotional overload built up by the burst of colours that rules everywhere no matter what. That’s why the culture of Iran and of the legendary Persian empire is best seen through the colours of their sinuous art, sophisticated architecture and welcoming traditions.

The colours of Iran’s culture

White as the symbol of purity in Iranian culture. White like Tehran‘s symbol, the Azadi Tower, built in the early 1970s to celebrate the 2500th anniversary of Persian monarchy and opened under the name of King’s Memorial Tower, changed into Freedom Tower after 1979 Revolution.

READ MORE: Where to stay in Tehran, a guide to the best hotels

Persian Blue as the national colour

Blue as national colour in Iranian history, the symbol of heaven and spirituality, here beautifully represented in the sophisticated decorations of Imam Mosque in Isfahan‘s main square Naqsh-e Jahan, but also present in Tabriz Blue mosque heavily damaged in the 1779 earthquake.

READ MORE: Top things to do in Tabriz, Iran

Pink like the roses ever-present in the decorations of Qajar-era buildings like the beautiful Nasir al Molk mosque, one of the best things to do in Shiraz.

READ MORE: Things to know before travelling to Iran

A culture of opulence, gold here is in the peacock tail shaped by the light seeping in the hole of Sheikh Lotfollah mosque dome at sunrise in Isfahan.

Shades of the desert that covers a great part of Iran’s soil. In cities like Yazd and Kashan, the desert is an important element of the culture and is evoked in many aspects of daily life such as the local architecture with the famous badgirs, or windcatchers.

Kaleidoscopic like Persian carpets, central of the culture of Iran

From the kaleidoscopic interior of Nasir al Molk mosque in Shiraz to Persian carpets all over the country, multicoloured decorations always play a great role in the culture of Iran.

Sand hues are the main colours in all the vestiges of the ancient Achaemenid Empire, from Pasargadae to Darius the Great’s precious ceremonial capital Persepolis to the engraved funerary complex of Naqsh-e Rostam.

Iran is not only a desert. The Caspian provinces of Gilan and Mazandaran make up in greenery for all the barren landscape of central regions. In Iranian culture, green is the colour of regeneration, heaven, and gardens, and that’s probably why picnicking is so important.

READ MORE: How to plan a perfect trip to Iran

Silver like the colour of luxury and jewellery, not necessarily the ornaments you wear but also the mesmerizing interplay of mirrors and lights at the Mirror Hall of the beautiful Narenjestan Garden in Shiraz.

Turquoise as a mutation of blue, widely present in the masterpiece that is Yazd Grand Mosque and in all manifestations of the culture of Iran.

The pride of Iranian cuisine, red saffron is a regular in the local culture and zereshk polo (saffron rice with sour berries) always a must for me when I go to Iran. Red-ish ochre is also the clay used to built charming Abyaneh near Kashan.

3 thoughts on “Colors of Persia, culture of Iran”