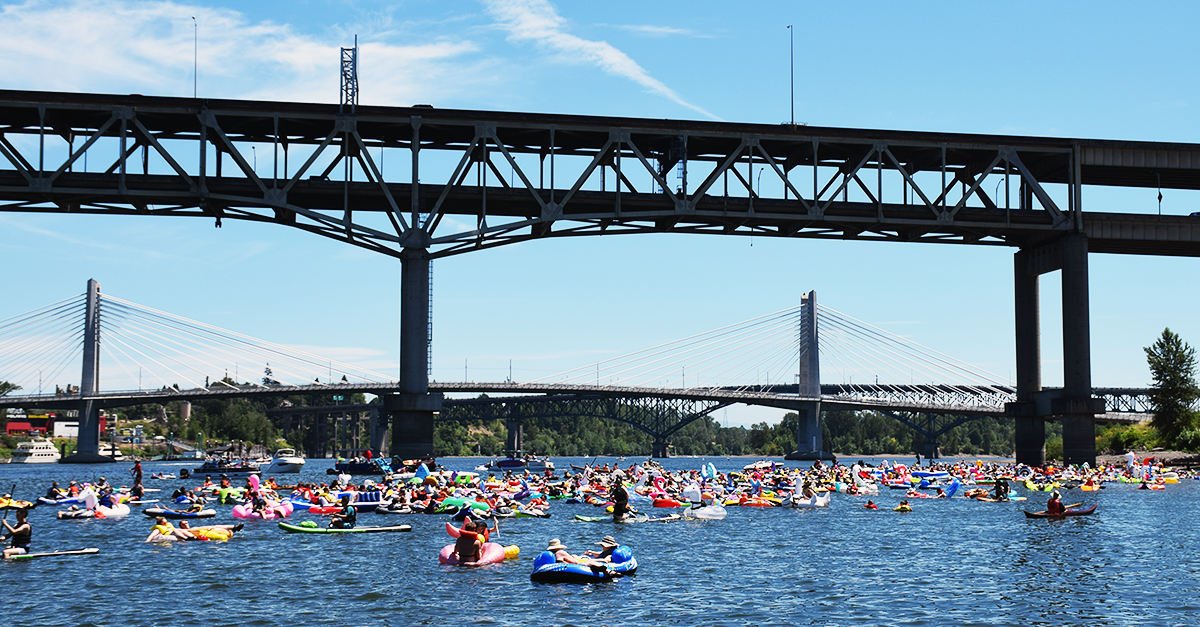 Not one of the most popular destinations in the US for foreign travelers, Oregon is definitely worth exploring. Despite the frequent rain, find out when is the best time to visit Portland and what are the best things to do, whether it rains or it’s sunny.

They say there are only two seasons in Portland, Oregon: rain and summer. Though it’s true it rains a lot in Portland, if you visit between May and September you’re more likely than not to enjoy a sunny day (do bring a raincoat just in case, otherwise it will most definitely rain).

Other than the pleasant weather, the advantage of visiting Portland from late spring to early fall is a proliferation of events and festivals. And since the city’s slogan is “Keep Portland Weird”, you’re also going to experience the quirky side of this Pacific Northwest bastion of cool. Here are just a few of the many weekly, monthly, and annual events and festivals to take in on your trip to Portland and to help you decide when is the best time to go to Oregon. And if you have more time, go up north and visit Seattle too.

Best time to visit Portland, Oregon (and what to do)

Concerts in the Park (July thru September)

Since 1901, free concerts at Portland parks have delighted thousands on balmy summer evenings. With 4-6 gigs every week, Concerts in the Park isn’t just one of the City of Portland’s most popular programs, it’s always an excellent opportunity to bring a picnic, listen to great music, and people-watch.

The Clinton Street Theater has shown The Rocky Horror Picture Show every single Saturday at 11:30 p.m. since 1978. This is what happened to Saturday night.

⇒ Tip: Book a Best of Portland 2-hour tour to get to know the city!

Every Sunday evening, rain or shine, go to the Zoobomb Pyle in downtown Portland to pick up a loaner kiddie bike and join a group of adrenalists on a wild downhill ride through Washington Park. The Zoobomb is a veritable institution, albeit one that’s in decline, if the ever-decreasing Pyle is to be believed.

The smarty pants at Night Light Lounge hardly exaggerate when they say your mother warned you about shows like their Sunday Drag Queen Brunch. Ignore that voice and let your hair down at the only all ages and weekly daytime drag show. Portland generally takes its brunch seriously, except when there’s drag dance numbers, then it’s really on.

READ MORE: Planning a US trip? Check out the top things to do in New York City!

Come June, there isn’t a weekend in Portland without a beer festival. The Fruit Beer Festival is the fruitiest (June), Oregon Brewers Fest the biggest (July), the Fresh Hops Fest the brightest (September), and all the other fests in between beerlicious as well. See listings in the Oregon Beer Growler, available for free at any brewery.

For beer fans, this is definitely the best time to visit Oregon.

First Friday can seem less polished than the swankier First Thursday in the Pearl District. As grungier or hippier it may come across, it’s a much friendlier, less pretentious art walk in SE, with more plentiful food and drink to boot.

The Last Thursday fair on Northeast Alberta Street has grown into Portland’s largest art event. Fifteen blocks get closed to cars, and thousands of artists, performers, craftspeople, weirdos, and other revelers fill the street. We believe this is where Portland first put a bird on it.

⇒ Tip: Explore underground Portland to learn about the city’s seamy past.

Sunday Parkways (monthly, May thru September)

One Sunday a month in spring and summer, a different Portland neighborhood shuts down to car traffic and bicyclist of all ages take over. Sunday Parkways has become a popular tradition fostering community through a Portland AF pastime (biking). If you don’t have a bike, rent an orange one from Biketown.

One day every year the Wilhelm Portland Memorial Funeral Home opens its doors to the public. Stroll through eight floors and many miles of corridors and hallways and nooks lined with urns and grave-site memorabilia. Best morbid fun in town, guaranteed.

Watch movies filmed by bike (May)

Showing just how bike-crazy Portland is, the week-long Filmed by Bike festival at Hollywood Theatre showcases bike-themed short 8-minute movies by independent filmmakers from around the world. On top of the film screenings, the festival features a street party, workshops, dance nights, and, of course, rides to breweries.

Whether you bring your own bike or rent one, you won’t want to miss hundreds of bike-related events during the three-week Pedalpalooza festival in this bike-friendly town. From the Midnight Meth Ride to Happy Hour Bike Polo to the Pastafarian Pirate Ride to the Big Lebowski ride to the group cuddle at Cuddle PuddlePalooza, there’s something for every bicycle enthusiast.

The most notorious Pedalpalooza event involves thousands of bicyclists riding around town in various stages of undress. The Naked Bike Ride is the biggest of the World Naked Bike Ride events.

The Rose Festival comprises a series of events that draw thousands to downtown Portland for a month of entertainment, food, and shenanigans. The highlights of the city’s official festival—Portland’s nickname is the City of Roses—include three parades, Dragon Boat Races, a weekend fair, a run, Fleet Week as well as a Court (don’t ask).

If you only take in one of the festival events, make it the flagship Grand Floral Parade, which is exactly what you think: a huge parade of flower-decorated floats, bands, and tens of thousands of people lining the 4.2-mile route. Out and about at night? Go to the Starlight Parade to see a spectacular illuminated procession of floats glide through the city streets.

⇒ Tip: Book a day trip to enjoy the views of scenic Columbia River Highway and the region’s waterfalls.

There’s no better reason to visit Portland over the Independence Day weekend than the Waterfront Blues Festival, a benefit for the Oregon Food Bank and Sunshine Division. Tickets and passes are dirt-cheap, just remember to wear sunscreen, as the festival takes place outdoors by the river.

Just when you thought events in Portland couldn’t get any weirder, the Portlandia Mermaid Parade marches along. The new-ish event celebrates not the TV show but the giant downtown sculpture of the local river goddess, the river itself and “all things mermaid and water myth related.” Join mermaid entertainers in a stroll along the waterfront as a group of artists, led by Una the Mermaid, revitalizes “Portland’s artistic energy” and “fantasy-based self-expression.”

Not only the longest-running jazz fest west of the Mississippi but also (probably) the most scenic one, Cathedral Park Jazz Festival is held over a mid-summer weekend in the eponymous park under the most beautiful bridge in Oregon. Bring a picnic or order from a food cart. And it’s free!

The Willamette River, which divides the city’s west and east, used to be a polluted cesspool of sewage and runoff. But after a decade of clean up work the Willamette is approved for summer swimming. So what do Portlanders do? Create a wacky charitable event, of course. Portland’s summer beach party, The Big Float, celebrates the Willamette River with floating concert stages, thousands of individual floaters (in costumes!), slip-n-slides, and lots more.

Riding a bike or walking across one of Portland’s nine bridges is not necessarily a unique event. The Hawthorne, Morrison, Burnside, and Steel bridges, for example, have special lanes for wheeled or footed travelers. But biking across all the bridges, including ones that don’t allow bikes or pedestrians, is certainly special. The Providence Bridge Pedal is a once-a-year biking and walking event in which bridges are closed to cars and open to bikers, walkers, and even four-legged friends.

The Soapbox Derby has spawned a generation of humans making and piloting homemade vehicles down roadways around Mt. Tabor. Batmobiles, Flintstones and Scooby-Doo mobiles, and many totally unique creations race down the extinct volcanic cinder cone past lines of cheering onlookers for prizes and attention. Few events in Portland get this weird (or crowded). Totally free but BYOB.

Every September, one hour before sunset, the Chapman Elementary School lawn fills with lawn chairs and blankets when Portlanders come watch the greatest nature show in town: Swift Watch. Thousands of migrating Vaux’s Swifts circle overhead and pour into the school’s brick chimney which they use as a roost. Birds of prey provide the occasional drama.

Don’t expect a bunch of busty, braided, beer-boot-slinging waitresses at Dogtoberfest. This festival, put on by Lucky Labrador Brewing Company, is a charity dog wash. The suds are not all for the dogs, though. The Lucky Lab brews its special Dogtober Festbier for the event, and the celebration includes food and live music.

Bring your pup for a spa day, enjoy a pint or two, and donate some money to Dove Lewis, a local animal hospital.

Harvest season traditionally sees a number of heritage festivals all over town. The best and longest-running are the Greek and Polish festivals (there’s also a Nordic, Serbian, and Romanian festival). Eat and dance your heart out while celebrating some of the local ethnic communities.

Find more fun summertime indoor and outdoor activities in 365 Weird Things to Do in Portland, Oregon, an ebook from which has this article been excerpted, or on Instagram. As a loyal reader of Chasing the Unexpected, use code CHASING to get the book for only $3.65.

Bio: Peter Korchnak is a co-founder of the travel website Where Is Your Toothbrush?. A non-fiction writer, he is the author of Guerrilla Yardwork: The First-Time Home Owner’s Handbook. Other than travel and writing, his passions include playing ice hockey and juggling projects.