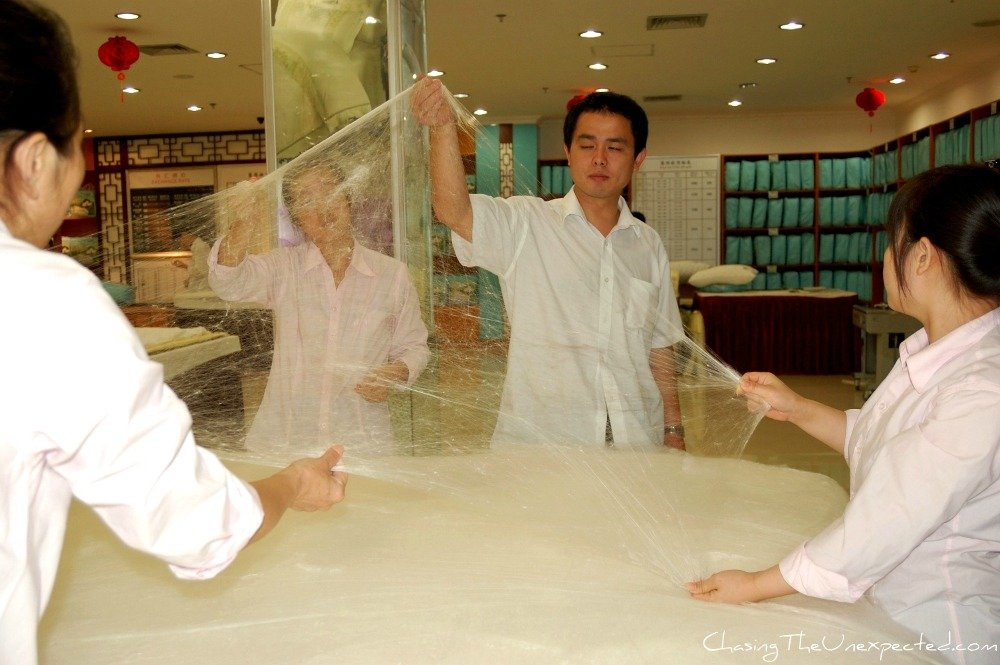 My stay in Beijing was an alternation between tourist attractions and factories, and as a main station of the legendary Silk Road starting right from China, I visited the government-run silk factory to see silk production process steps, alongside pearl and jade factories. While I absolutely adore pearls and jades, what impressed me the most was to see the silk production process steps, from the worms’ cocoons to the finest bed sheets.

I knew China has always been famous for its silk, that throughout the centuries they have exported it all over the world, decorating palaces of kings, emperors, presidents, shaping dream dresses for queens and empresses, evoking art, femininity and the obsessive attention to the smallest detail, yet when I stepped in the silk factory in Beijing I wasn’t particularly excited.

I thought it was going to be some kind of “technical” visit, but instead, I immediately found myself immersed in a modern replica of the legendary Silk Road, the most famous trading route of ancient China, that saw the mysterious and adored fabric being exported to Western countries over the span of centuries.

The Silk Road trade saw its heights during the Han dynasty, when it crossed two Continents, from China to Europe, passing through the Indian Sub-continent, the Persian Empire, the Middle East, the Mediterranean region, and finally the Roman Empire and Europe.

The routes ancient traders took along the Silk Road were hostile and claimed the lives of more than one pioneer.

Either choosing to cross the Taklimakan desert, known at the time under the name of “Land of Death”, or passing through the Himalayas, travelers constantly faced the risk of not arriving at their destination or not being able to go back home.

The Taklimakan desert is China’s largest and driest desert. Nestled in the Tarim Basin between the Kunlun Mountains and the Plateau of the Tibet on the south and the Celestial Mountains on the north, it was one of the harshest regions travelers had to face in ancient times. With a temperature range that dramatically drops from 50°C during summer to -20°C wintertime, and the common sand storms particularly dangerous due to the power of the wind, Taklimakan desert was one of the most inhospitable areas along the Silk Road map through which the precious material had to pass by in order to reach the far-flung destinations it was aimed to.

If travelers and traders were not to pass through the Taklimakan desert, they could choose among other options, but the truth is said, they were as bad as the first one: on the northeast, there is the Gobi desert, almost as tough as the Taklimakan, while on the south there are the Himalayas, Karakorum and Kunlun mountainous chains, that still today are a barrier between China and the sub-continent.

The Chinese traded silk for medicines, perfumes, precious stones and apparently slaves. When the secret of the silk was not Chinese exclusivity anymore, the trade along the legendary silk route started its decline.

At the silk factory in Beijing, I saw how the silk is made today, but within the tour, they managed to give me a hint of how the precious material was made once upon a time, which is not much different from today’s process.

Silkworms produce their own cocoons out of a single silk thread, and once the cocoon is ready, they are hand-picked one by one and put in an oven (sic!), where the heat will kill the worm without damaging the silk thread. When worms are dead, the cocoons are left to soak in water so workers can easily find the end of the thread in order to place it in the spinning machine that will untangle many of them per time. A single thread is too thin, and usually, the finished silk strand used to make the fabric comprises eight raw threads.

Silkworm was originally raised in Asia and Africa, although now farms raise silkworm for silk production in many parts of the world with moderate climates. The different species of silkworms farmed are mainly valued by the quality of the silk they produce and the number of breeding per year.

When the silk thread is untangled from the cocoon, the dead worm is left in the water, and the thread is ready to be worked.

At the end of the explanation, our guide brought us to the last step of our mini “silk road”, the store where we could buy all silk products made in that factory at convenient prices. I wanted to buy a beautiful set of bed sheets but for the sake of “traveling light,” I left it there. After quite some time, I still regret not having bought it, and should I go back to Beijing, that would be my first stop. The price of silk is fairly good in china since it is the largest silk-producing country along with India.

Admittedly, the journey through the process that makes the silk has proved more fascinating than expected, and since China boasts such a long tradition of silk-making and trading, leaving the country without visiting a silk factory is like missing out on a crucial part of Chinese history and culture.

Information about silk and its usage is not hard to find nowadays, although practically walking through the process step by step was an interesting experience in China. The Discovery of silk in ancient China goes back to 3000 BC, when Hsi Ling Shi, wife of Emperor Huang Ti was the first person to unintentionally find out silk was a weavable fiber. Silk materials are used in many different shapes around the world. Silk thread jeweller is one kind of handmade silk production used for fashion in India. With silk thread, they make jewellery such as earrings, necklaces, and bracelets. Although, silk thread jewellery fashion is more common in India. In Afghanistan raw silk thread is used to design the sleeves, collars, and edges of Rosaries and they use raw silk fabric also known as Silk Noil to make shawls and chadors. So, every country uses silk products in a different way.

This is a state-run silk factory in China and while I did find it very interesting, it’s also fair to mention that it’s usually a stop in many tours of Beijing. Along with the jade factory, in fact, this is a “shopping stop”. You don’t have to buy anything, but it’s a place most tour guides will take you. I haven’t compared their prices with any other places, but the silk goods I saw were authentic and of high quality. In China, you are bound to find a lot of fakes, including silk products, obviously cheaper, so if you are looking for quality, pay attention and haggle well.